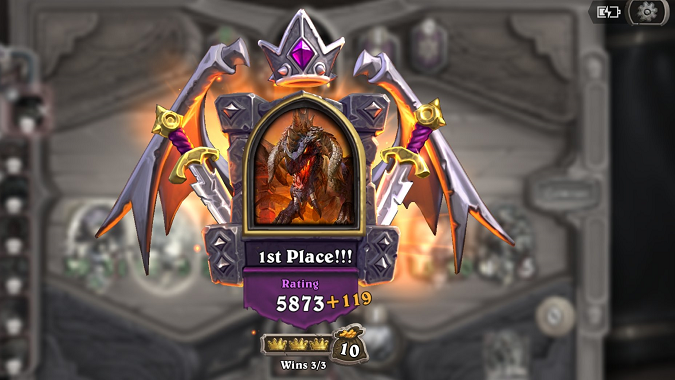 Like other “autochess” or “autobattler” games, the basic strategy of Battlegrounds is to build an unbeatable army. Each decision should further that ultimate end. Like a Ladder or Arena game, your Battlegrounds strategy is broken down into four phases: Hero selection, early game, mid game, and end game.

We’ll take a look at how to dominate in each stage of the game so you can rack up Battlegrounds wins. 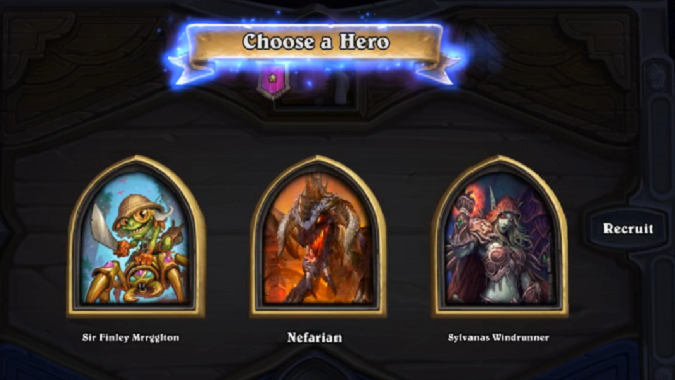 As hard as the developers work to balance all the Heroes, there are still differences in their power level. When you start a Battleground, you get a selection of free, so there’s an RNG factor to this choice. Whether it’s three great choices, three “meh” choices, or some combination, you want to pick the best Hero available — and to do that, you’ll want to familiarize yourself with all the Heroes in the current rotation.

These are all heroes I consider autopicks:

It’s like someone offering to take you to nicest restaurant in town: you don’t hesitate. If you’re offered one of these, grab it and you have a good chance of having a successful game. A.F. Kay — who skips her first two turns, but starts with higher-level minions — might look at a little weak at first glance, but she spikes in power and those early battles are survivable.

If none of those powerhouses are offered, I’m next looking for one of this list:

Continuing our restaurant metaphor, these heroes are more like a casual sit down place. They’re good, but not as powerful as the first list. Nefarian might seem an odd inclusion, but his Hero Power negates Divine Shields, a powerful mechanic in all phases.

These guys are fine, like a nice fast food place. Maybe not something you get super excited about, but it works. The Lich King’s Hero Power looks like it should be good, but in practice it isn’t as powerful. Akazamzarak would be better if the secrets persisted from battle to battle.

You can still win with any Hero, and I’ve had first place finishes with Akazamzarak, but it’s easier with a stronger choice.

The other Heroes I’m watching for are:

These are the guys I’m actively avoiding, like that greasy fast food place in a sketchy area of town. 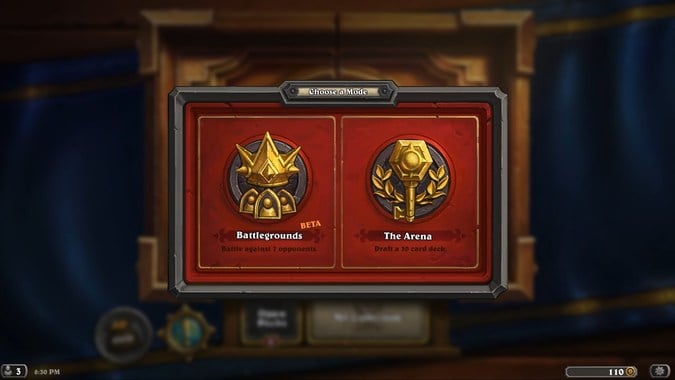 How to play Battlegrounds

Each round of Battlegrounds is broken in two phases: an active Recruit phase and a passive Battle phase. All your decision-making is done in the Recruit phase, where you build and empower your minion army.

During this phase, your resource is gold, which works just like mana. Here’s what you can do with your coins:

While minions you buy (but don’t play) will stay in your hand, gold cannot be carried over from round to round. You always want to think a round or two ahead in how you will spend your mana… err… gold.

When you go into the Battle phase, there’s not much to do. Just pay attention to inform your decisions for future rounds. 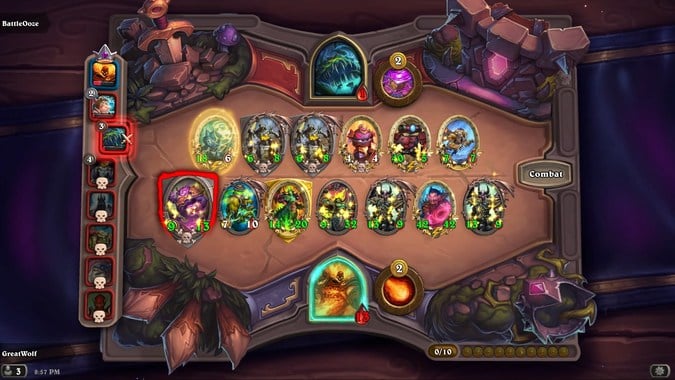 The best minions for your Battlegrounds army

The best Battleground armies possess tribal synergy, meaning they focus on powering up specific types of minions. The main minion “tribes” in Battlegrounds are Mechs, Beasts, Demons, and Murlocs. You could also go with a Deathrattle or Battlecry team, but their results are more random, which doesn’t always make for a successful deck.

Each tribe has a minion or two that drives its power:

Basically, you want to pick minions with the best synergy you can find, and keep powering them up as you go. 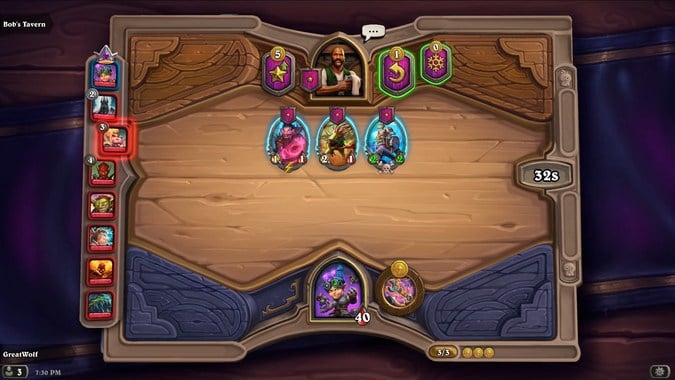 Options are limited in the early game, which makes these turns play out in a similar manner each time.  If you’re A. F. Kay, your early game is particularly easy because you do nothing. Assuming you’ve picked any other Hero, the early game is about spending gold and recruiting minions.

The first turn you have 3 gold and upgrading costs 5. Your best move is to buy any one of the available minions.Remember that your choice doesn’t lock you into a tribe. You can still switch in the mid game. Token generators like Alleycat or Murloc Tidehunter can give you more options later when you can sell the token for gold. Selfless Healer, Murloc Tidecallemr, and Righteous Protector can be good picks as well.

Now you have four gold and upgrading also costs four. To know what you’re up against, you can watch the icons of your opponents on the left hand side of the screen — an icon will pop up whenever one of them upgrades. You can also mouse over them to see what Tier they’re on. You don’t want to get too far behind on upgrading, so unless there’s a minion you just have to have in the pool of available minions, you should use this turn to upgrade to Tier 2.

You now have five gold and, if you didn’t upgrade last turn, upgrading costs three. Though you won’t get any new minions, you should seriously consider upgrading now. Winning rounds in the early game is less important because the damage isn’t high, so don’t worry if you’re in sixth or seventh place as long as you’re setting yourself up well for the midgame. 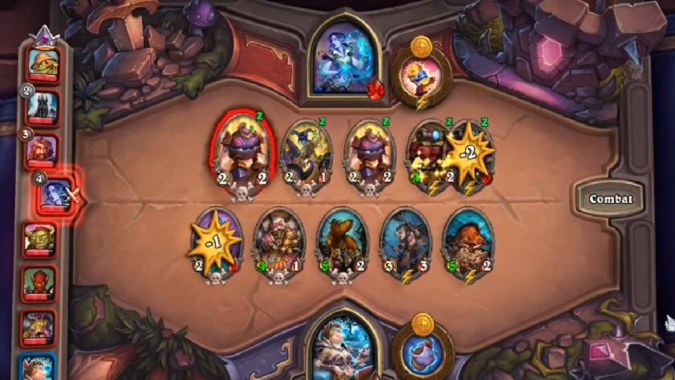 By turn four, you have six mana so your best move is usually to purchase two minions. By the midgame, you want to start honing in on your tribe strategy, and start generating doubles and triples. You get a triple by collecting three of the same minion, which gives you a more powerful golden version of the minion plus a minion from one Tier higher. These are free minions t0 put stats on the board.

This is also the time to start looking for buff minions like Zoobot and Menagerie Warden. Magnetic mechs also act as buffs if you’ve played any other mech minions. Replicating Menace adding more minions to the board can change the outcome of a round. If you’re hurting for board space, you can immediately sell these buff minions after you’ve gotten the buff — but if you don’t have another minion to drop, you’re better off leaving the stats on the board. The buff card you most want to find is a Lightfang Enforcer (or three).

The Boogeymonster, which recently moved to Tier 4, is also a good midgame play, and a key target for buffs. He’s another minion that can snowball, though not as quickly as Junkbot or Scavenging Hyena, but he’s also not reliant on a specific tribe to work.

One to three of your opponents will fall by the wayside during the midgame. But thanks to these tips, you won’t be one of them. 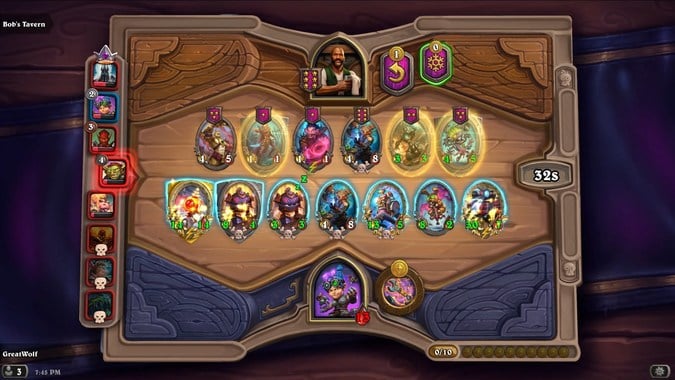 As you progress into the late game, continue to upgrade your minions (with buff cards and triples) and Tavern (so you don’t fall behind your opponents).

It’s critical to watch your battles unfold and try to position your minions in a way that gives the most favorable trades. Try to identify the strategy your opponents are using so you can counter it. A minion like Zapp Slywick can wreak havoc on some strategies, so you need minions that have died to make room for Rat Pack, Security Rover, or Void Lord to summon their minions.

Eventually you’ll get down to two or three players left and fight over and over until only one remains.

One of the best ways to learn Battlegrounds is watching other people play them. Look at how they spend their gold, and position their minions. I stream Hearthstone each Tuesday night at 8:30pm CST on the Blizzard Watch Twitch Channel and my replays are available on our YouTube channel. I’ve been playing Battlegrounds a ton on stream. You can learn from my victories as well as my mistakes. With a little practice and a little luck, you’ll be headed for the top four in no time.

What’s your best advice for dominating in Battlegrounds? Leave a tip in the comments below.

Many thanks to @andrewisliving on Twitter for allowing the use of his image in the header of this article.