In the Diablo 3 universe, starting July 3 and for roughly three months, there is an adorable steampunk-style pet just waiting for you to win it and love it and make it your own. “But wait! How shall I acquire this shiny little friend?” you argue. Fret not, for I am here to assist you (and sound like a superhero cliche).

The Journey interface panel can be opened at any time to track progress. Alternatively, keep manual track in D3Resource if you’re trying to follow along without popping the window up every five minutes to see where you are in the Journey. I tend to like this because you can click the chapter name (ex., Chapter 1) on the page, and it checks off all the items in that chapter as completed. Since this tracker uses a single screen, it makes it a lot easier to see what you have remaining.

The various tasks in each Chapter/Tier are increasingly challenging, with Guardian’s tasks requiring the most time and effort on the part of the player. However, the contraption pet is one of two cosmetics available for completing all of Season 21’s tasks, so get ready to knock out both the Chapters and the Tiers — or everything listed below — to get it. 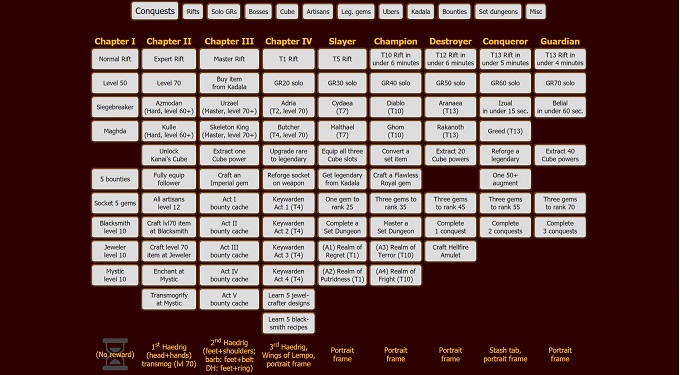 A few types show up pretty much across each Journey Chapter or Tier: 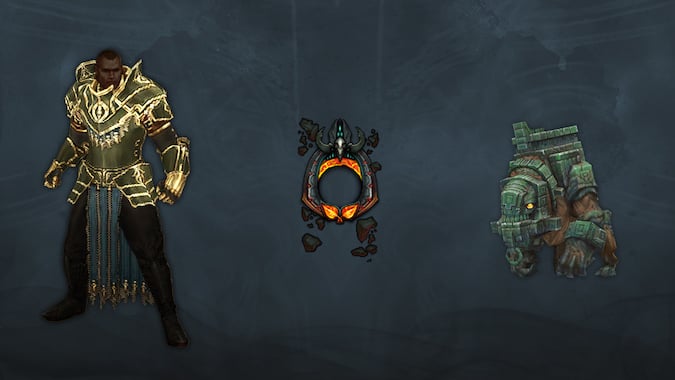 Chapters for gear, Tiers for cosmetics

Chapters 1-4 represent the general goals most players should be able to reach in a 3-month season. The Chapter goals tend to focus on natural progression markers, such as hitting levels 50 and 70, killing bosses throughout the five Acts, and leveling up/using the artisans (Blacksmith, Jeweler, and Mystic). While Chapter 1 does not have a reward, completing the subsequent chapters rewards a bag of two gear pieces apiece (Haedrig’s Gift).

In addition to Haedrig’s Gift, the player earns additional cosmetic rewards for completing Chapter 4: usually wings/pet, a portrait, and transmogs returning from a previous season. Something useful for progression: let’s say you get to 70 and go from running Normal-difficulty Nephalem Rifts to Torment 1 Nephalem Rifts. You will not only knock out the tasks for Normal and Torment 1, but doing so also completes the tasks for the difficulties in between (Expert and Master). Players complete the first four chapters as fast as the first night of the season; playing a few hours a night will spread this work out over a week.

Upon completion, each Tier rewards an improved version of the portrait received from Chapter 4. The completion time for the Tier groups is wholly dependent on completing the more complicated tasks, such as Set Dungeons and Conquests. Players that are burning through the first weekend of the season can knock out everything, leaving the remainder of the season for running Greater Rifts, grinding Paragon levels, and improving their gear. Going back to the earlier estimate of running a few hours a night, a casual player could complete all this in about a month, but some of it is luck and hard to estimate.

The penultimate Tier, Conqueror, rewards an additional stash tab (up to a maximum of five) with the upgraded portrait. New cosmetic rewards — the Industrial Portrait Frame and your clanky Stupendous Contraption — only come once the player has finished all Tiers through Guardian.

I know it sounds like a lot. And it is! You have to work to earn your little gear-filled friend. But the rewards and sense of accomplishment are totally worth it. Go forth and slay!