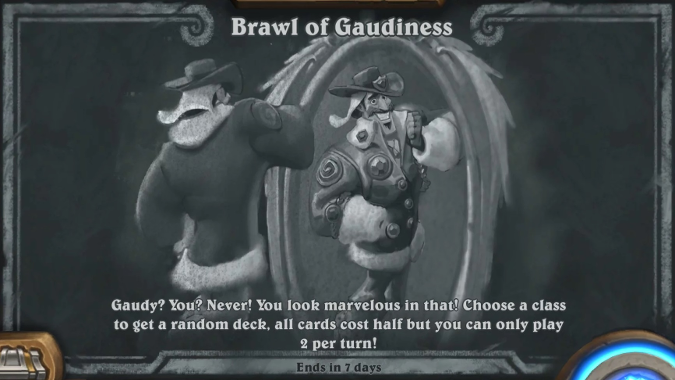 In Hearthstone’s Dalaran Heist single-player adventure, there’s a treasure called the Robes of Gaudiness. It gives you a passive effect that makes your cards cost half as much mana, but limits you to playing only two per turn. If that sounds like it would make for an interesting Brawl, the Hearthstone team agreed with you and created the Brawl of Gaudiness.

In this Brawl, you’re provided a deck so the size of your card collection doesn’t matter. The deck is full of random cards, and you’ll find everything from Legendary cards to Basic cards in your deck. You’ll have some class cards and some neutrals, but there are no strict ratios — it’s all random. The decks tend to be heavy on minions and light on spells: you’ll find a few AOEs, but you shouldn’t count on them.

The Brawl plays out much like an Arena game. Good trades, board control, and high tempo plays are key. Go for big stats and get them down on the board as soon as you can. 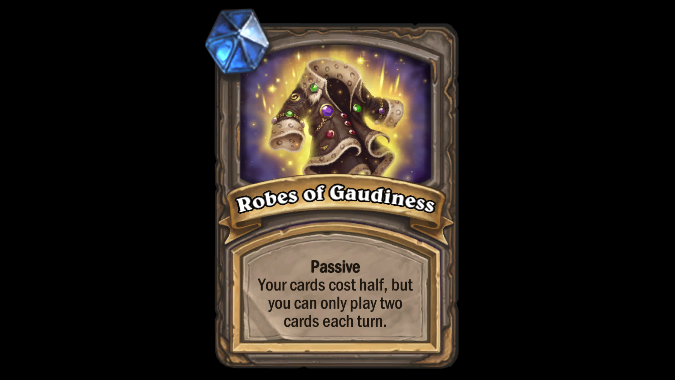 How to win the Brawl of Gaudiness

The two best Heroes are Paladin and Mage. You’ll be using your Hero Power most turns simply to spend mana. Paladin uses his Hero Power to create a wide board of minions. Unless your opponent was fortunate enough to get some AOE or a Taunt, you can keep the pressure on.

The random aspect of the decks gives the Brawl great replayability, but limits the fun. There are going to be games where you’ll just have more powerful cards than your opponent and run them over. There will be other games where you’re on the receiving end, and the game was decided before turn one. Sometimes you’re the windshield, sometimes you’re the bug. If you’re after the card pack, keep queuing up. Eventually the RNG will fall your way.

Don’t be afraid to concede early if it looks like you’re getting overwhelmed, but never underestimate the power of the RNG. One game, I had played Eye of the Storm and Mountain Giant as my two cards. It gave me a board of three 5/6 Taunt minions, plus an 8/8. I felt pretty good about my chances… until my opponent answered with Deathwing and cleared the board.

Narrator voice: Ted did not win that game.

The concept of limiting the number of cards played per turn is intriguing and I’d like to see it on a card or Hero one day. Perhaps it could even be a new keyword. It would counter Combo decks while slowing aggro decks, but could open up other other combos with the reduced cost.

Best of luck in getting your card pack from the Brawl. May the RNG be ever in your favor.