How to play Diablo Immortal with a controller

We live in a wireless world. Good riddance to coils of cables, to tumbleweeds made of wires shoved behind media stands! If there’s a way to avoid tethering myself to hardware, I’ll usually take it. And for Diablo fans who might want to tackle the upcoming Diablo Immortal mobile title with a game controller, our wireless way of life is very good news.

I have no doubt that Diablo Immortal will feel great to play on native hardware. Touchscreen controls have improved by leaps and bounds, and based on the early hands-on experience I had back at BlizzCon 2019, I think the core Diablo experience will live and thrive on mobile platforms.

But when smashing demons and saving the world, a nephalem should use the weapons that makes them feel most powerful. So when the game does launch, some players want to have the familiarity of a controller. Here’s what you need to know to connect your peripheral to a phone or tablet.

Some critical caveats before we start

First and foremost, we don’t have confirmation that Blizzard will be programming Diablo Immortal to support play with wireless controllers. It seems plausible, even highly plausible, considering Diablo 3 had such a positive response among console players. But the project only just had its first alpha test, so this information is still hypothetical.

Second, assuming Diablo Immortal does have controller compatibility and you opt to take that route, your wireless controller can only be synced to one device at a time. So if you pair it up with your phone, you’ll need to disconnect the controller and re-sync it to your console when you’re done.

Fortunately, syncing controllers with other devices is straightforward. The best, and in some instances only, way to connect your hardware pair is with Bluetooth. This technology isn’t everyone’s favorite thing, but with the sheer variety of cables and ports out there across all the different parties, it’s the most straightforward way to go. It’s also the easiest and fastest way to go with any wireless controller. 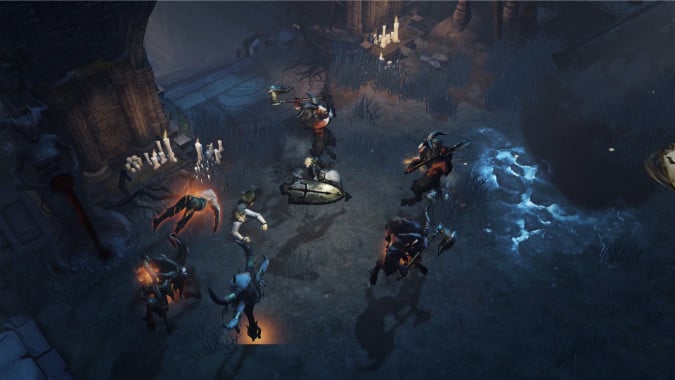 How to set up (most) mobile hardware with a wireless controller

The steps for set-up will be pretty similar across most hardware:

As I said, that should take care of you for most hardware. We’re at an unusual juncture where the current generation of console hardware just began, so even the latest mobile devices don’t have support for accessories from the PlayStation 5 or Xbox Series X. Expect that to change within the year. By the time Diablo Immortal is out, compatibility may not be an issue with the newest Sony and Microsoft controllers.

I’ve focused on PlayStation and Xbox since they’re the heavy hitters of console players. If you’re rocking a Google Stadia controller or a third-party device from Scuf, the process should be the same. Just keep in mind that iOS and Android developers may not have the dev kits to support those devices.

If you’re gaming on an Apple device, here are the wireless controllers currently supported:

There are additional peripherals with the MFi (Made for iOS) protocol that might have support, but compatibility may vary by Apple product and by game.

Android devices are a bit more of a free-for-all in terms of compatibility. Your best bet is to go directly to the manufacturer’s support website to double-check whether your controller of choice will work with your device.

Blizzard Watch is made possible by people like you.
Please consider supporting our Patreon!
Filed Under: Controller, Diablo Immortal, Mobile, Mobile Games
Advertisement