The Queue: One of these things just doesn’t belong 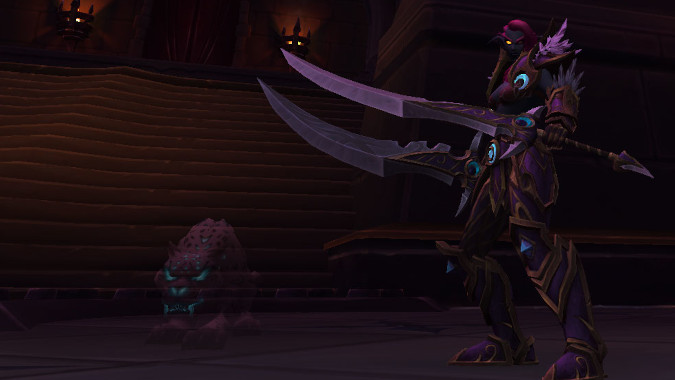 It had to end, and it has, the only way it could.

This is the Queue. Chaddius has left the building.

WELL, RC THE AUTUMN ELADRIN , WE KNOW THEY AREN’T FROM THE FEYWILD BECAUSE THAT’S NOT A WOW THING

Hmm, so devourers are confirmed to exist in at least two of the four Shadowlands zones, coming in via rifts to devour anima. Do we actually know anything specific about these creatures, other than that they exist to feed off anima?

We know that they are rumored to be from the In-Between, that same place we fly through when going to one of the other Shadowlands from Oribos. We do not know why that is or where in that seeming void they would inhabit. Perhaps they’re from the same world as the Brokers, based on how the Brokers seem pretty sanguine about them, and the Brokers are also pretty obsessed with Anima and grinding it up by any means necessary.

Rossi’s article about leveling your alts got me thinking. SL is the first time I didn’t enjoy the initial leveling experience. I didn’t mind Cata being linear until I got to my alts. I’ve never minded leveling slowly and yet SL had me chomping at the bit. So what was the problem?

I think one issue is the artificial time sinks all over the place. I’d much rather be active and do 5 more quests than sit and listen to the npc’s blah blah before I can pick up the next task. Seriously, make me kill 5 more boars instead of just standing here.

I think a second issue is that they really screwed up the pacing relative to the story, in this case you level too fast. It’s ridiculous to get to max level and not even have reached the final zone of the story line. I hated that I got to max level and still had virtually all of Revendreth to do. And at the same time I didn’t feel like I’d gotten to know the earlier zones either because doing side quests would have meant even more story while at max level. Picking Threads of Fate when you hit max completes everything and lets you get on with being a max level. But you will always be skipping the same zone, Revendreth. And starting with Threads of Fate means you don’t get the story.

I would have liked to see the story be broken into chunks (it kind of is), but chunks that you could do in any order. Then, when you have “done” each zone’s story there could be a grand finale story-line that ties them together.

Q4tQ: How do you think they could have solved this problem? Or do you not see it as a problem at all?

I don’t think this particular story works with that kind of ‘choose your chapter’ storytelling, and while I did like it in Legion and Battle for Azeroth, I think for Shadowlands having Revendreth be at the relative end of the leveling experience makes a good amount of sense. It’s the moment where every Covenant realizes just how much things have gone off the rails — it is, in essence, the moment in the story when your heroes think they’re about to gain an ally and help stop the menace only to discover that the menace got there first. It wouldn’t have the same weight if it happened before you went to Bastion or Ardenweald.

I do feel like going to Revendreth when I have less than a level to go to 60 felt really bad. I hit 60 on my first character with almost all of Revendreth to go before I could start my Covenant story, before I could do anything I wanted to do, before I could get serious about the Maw or Torghast or anything of that sort. It wasn’t fun. As much as I liked the actual story of the zone, I definitely felt like I could have done without it. And I did do without it on my next character.

I think part of the problem was that I had enough rested banked up that it exacerbated that issue, however. Perhaps making Revendreth a little shorter and letting the Covenant story take over sooner would have helped, I honestly don’t know, but I don’t think dicing the story up and letting it be choose your own adventure would have worked this time out. There’s never going to be a leveling experience that works for every taste, ultimately.

SOEROAH ILLUSTRATES A REAL PROBLEM WITH GEARING IN SHADOWLANDS

Me before leveling another alt: At least the campaign gear is a good catch up

Me actually trying to do the campaign on a fresh 60 without weeks of incidental gearing: Well crap

This is why, as much as I hate to say it, PVP is probably the best way to get geared up fast enough to do the Covenant Campaign and get that other gear for an alt. You’ll hit 160 ilevel in a weekend and from there you’ll be able to do the first few chapters, which will push you ahead more. It’s not ideal, especially if you hate PVP, but it’s honestly the best, fastest way for an alt to get caught up.

SPENCER MORGAN, YOU REMIND ME OF A SCENE IN MALLRATS

Q4tQ: why are our WoW characters so gross?

We walk around environments like Maldraxxus, the sewers of Tol Dagor, we got all kinds of monster guts on us from so much time spent killing.

I don’t see any indoor plumbing, any toothpaste, mouthwash, razors, soap, deodorant, bath tubs, or even a bottle of purell. If we ran a fingernail across the back of any of our characters, we’d scratch off a rowdy layer of dead skin and dried sweat.

What problem do the cultures of Azeroth have with hot springs, perfume, and hygiene?

Dude, it’s a video game. I mean, does it really need to have realistic hygiene? A wizard cleaned it.

I mean, I can carry two swords longer than my whole ridiculous Night Elf body, which is itself longer than it has any right to be. I can jump twenty feet and land in an explosion and immediately start swinging my crazy self around slashing at everything. I can scream so loud that people die. I once punched a flying dragon or dinosaur thing so hard in the face it became my mount.

It’s not the Sims. Just assume you take a shower and brush your teeth when you log off if it’s that big a deal.

QftQ: Who does a better underground resting place, Venthyr or Dwarves? And, why?

Night Elves. They build undergrown barrow dens that held Illidan for 10,000 years, and he only got out because someone let him out. Dwarves build three underground cities, one’s infested by elementals, one got taken over by dragons, and one’s Ironforge. And the Venthyr ones probably smell… well, not good in a way I can’t describe and keep the site family friendly.

Okay, that’s the Queue for this week. 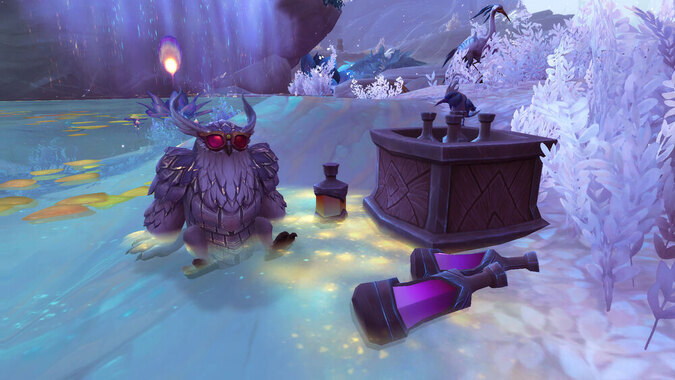 Blizzard Watch is made possible by people like you.
Please consider supporting our Patreon!
Filed Under: Chaddius?, No
Advertisement