How to reset your skill points in Diablo 2: Resurrected 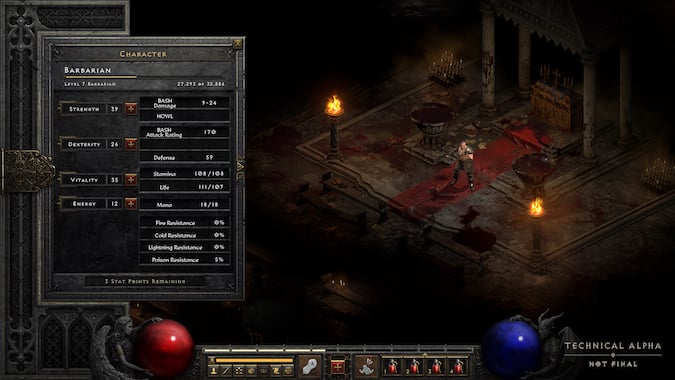 Seasoned Diablo 2 players know this already, but those who started with Diablo 3 may be in for a rude awakening in Diablo 2 Resurrected, because you cannot freely respec your skills and abilities. Instead, you earn one skill reset per difficulty (Normal, Nightmare, and Hell). This does mean you’re a little less likely to experiment with specs than you might be in Diablo 3. When you assign your skill points every level, you’re making a bit of a commitment, because once you’ve used up your three free respecs you’ll need to be prepared to grind if you want to make any more changes.

But fortunately, your initial respecs are very simple to get, which can help you find your feet in D2R. The first option for respecs comes automatically as a quest reward — your first quest reward in-game! Complete Akara’s “Den of Evil” quest at the beginning of Act 1. After you talk to Akara to turn in, a new option shows up on her conversation menu: Reset stat/skill points. Akara’s policy is the classic “everybody gets one.” That said — you only get one per difficulty. Once you use it, it’s gone for good.

But you’re not entirely out of luck if you used all your reward respecs. The second option is a grind, but there’s a caveat — you’ll need to be on Hell difficulty. To be clear, this means 1) you have to finish Normal and Nightmare difficulties and 2) you already used your Act 1 respec on Hell difficulty.

Do you still want to try something new on your current character? Then it’s time to start farming act bosses for their unique random (read: not guaranteed!) drops. Here’s what you’ll need:

Combine all four in the Horadric Cube (obtained in Act 2) to create a Token of Absolution. Use your token (like you use a potion), and voila! You have reset all your skill and ability points (which should be numerous by Hell difficulty). Technically speaking, you can do this as many times as you want. However, “grind” is an accurate term here, because farming these essences is not easy or fast.

Are you at a weird in-between place of having both earned and used your Normal difficulty reset, but you haven’t made a bunch of progress? Then, you may want to consider creating a new character. Playing a new character nets you both a fresh build and a fresh opportunity to earn a respec with Akara by completing the “Den of Evil” quest.

Yes, your respec options are limited. But the replayability of Diablo 2 is not to be denied; 20 years later and people continue to play (and stream) the original title! D2R continues that legacy with its updated 4K graphics and quality-of-life improvements.