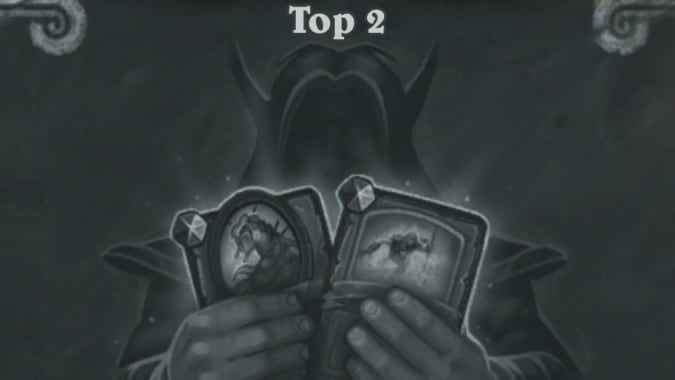 This week’s Hearthstone Top 2 Tavern Brawl challenges you to create the most iconic pairing of cards possible. Some things just go together naturally: Turkey and dressing, R2-D2 and C-3PO, socks and shoes, Mario and Luigi, peanut butter and chocolate, a hammer and a nail, Kermit and Miss Piggy, Phineas and Ferb, Rossi and Ashkandi. Now, its up to you find those kind of perfect mates in Hearthstone for this week’s Tavern Brawl.

This week is another Wild Constructed Brawl. You’re not so much building a deck as you are choosing a pair of cards. These cards combine in a way greater than the sum of their parts to create some incredible plays. As long as you’ve got the two cards you need, the size of your collection shouldn’t hold you back as much as if you were building a full deck. Unlike other Brawls, no cards are off limits. 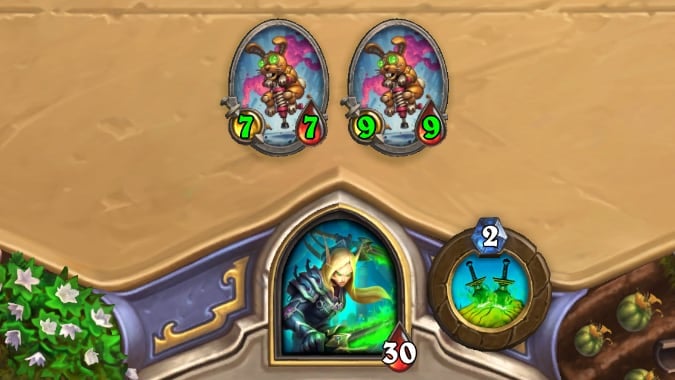 How to win the Top 2 Tavern Brawl

But which two cards should you use? Let’s look at some card combos that will help you win this week’s Brawl.

One of these pairs should see you through. With only two cards, it’s easy enough to copy the pair you’ve played against that may have been particularly effective.  If you find another great pair, share it with us in the comments.

Overall, I personally didn’t find this one enjoyable. You’re basically seeing which one of you prepared the better answer ahead of time, and there’s little to no decision-making to do after the game starts. On the upside, the games can be quick.

When Blizzard repeats this Brawl in the future, I would suggest banning certain cards like Elwynn Boar, Pogo-Hopper, and Patches. Perhaps that would open room for some fun and less predictable pairs to be played.

Narrator’s voice: They did not.

Good luck getting this week’s pack!