Heroes of the Storm PTR patch notes for May 9 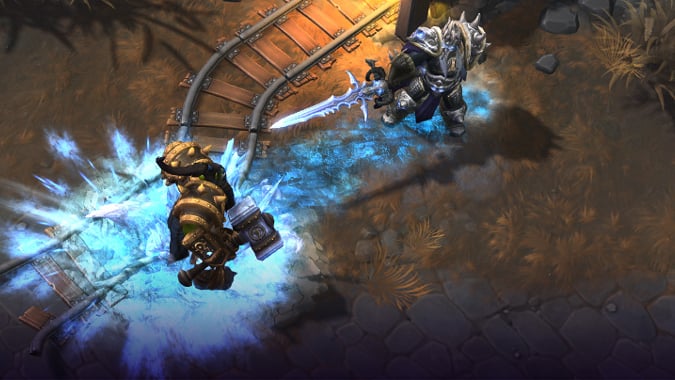 The latest Heroes of the Storm patch has hit the PTR. Not only is Chromie playable on the test realm, but so are a number of other fixes and changes — most notably a rework of Falstad’s talents and an even larger redesign of Arthas and Anub’arak, two Warriors who have sorely needed some love. Additionally, the developers continue to go all-in on the Quest variety of talents, reworking Conjurer’s Pursuit, Executioner, Hardened Focus, and Seasoned Marksman to be Quest talents, reducing their initial bonus but granting a larger one once the Quest is completed.

You can check out these changes and many more in the patch notes below — this patch is shaping up to be a big one!

Chromie, Keeper of Time, has been added to Heroes of the Storm and is now available for play! Read on for a brief overview of her Abilities.

Hero League Matchmaking
The top few hundred players in the world have extremely high matchmaking ratings (MMR), and the MMR gap between these players and the general population can be dramatic. At times, only a few of these extremely talented players are in the queue waiting for a match. In these cases, a highly-skilled player could previously be matched with several of the best available allies in queue, along with one lower-rated player in order to help balance out the team’s average MMR and find a match more quickly.

A new change has been implemented with today’s patch in which the matchmaking system will prefer to create a game that’s a little less even, using the highest-rated players available, rather than create an even game that includes lesser-skilled players.

In the overwhelming majority of the games it creates, the matchmaking system prefers very even matches. However, in cases like those described above, the matchmaking system will prefer to create games where the high-level player has a slight advantage, but all players are closer in skill, rather than set up a match where the high-level player has to work harder to “carry” a lesser-skilled teammate. In essence, today’s change will help to maintain the overall fairness and integrity of the league over the fairness of that specific match. Additionally, this should only occur after a relatively lengthy wait in the Hero League queue.

Developer Comments: We’ve noticed some rather un-fun behavior in the form of sniping Healing Wells over time using very long range Abilities. While we’re okay with players doing this to a degree, we found it was too effective given how little counterplay there was. To help solve this, turned a sizable portion of Healing Well Health into a Shield. This means that if you offer your Healing Well some respite from enemy attacks by chasing opponents away every now and then, it will start to regenerate some of that Shield. Only you can protect Healing Wells from those pesky Arcane Orbs!

Developer Comments: Our intention for Battle Momentum was to create more active gameplay by using your Basic Abilities more often, but we found that a lot of this Talent’s power lied in its ability to reduce your Heroic cooldowns. We wanted to increase the cooldown reduction granted by the Talent, but didn’t want Heroic Ability cooldowns to drop to absurdly low levels. By making it only reduce the cooldowns of Basic Abilities (Q, W, E), it allowed us to increase this cooldown reduction without making it overpowered. We’ve also made Battle Momentum Hero-specific, so that we can tune each one without affecting all the rest, since Attack Speed, melee versus range, and the nature of your Basic Abilities can all drastically change what is balanced.

Developer Comments: We’ve added a completion point to this Talent. Upon completing its quest, players will be provided with some additional power. This allows us to offer spikes of power in-between Talent levels, or even for a single player on a team. Now, simply picking the Talent and only partially completing it is worse, but finishing the quest will return a larger reward. Choosing the right Talents on the right Battleground or with the right team composition has always been an important goal for us, and this change pushes this Talent to closer align with that goal.

Developer Comments: We like the punishing nature of Executioner, but have found over time that its benefit to the player is too narrowly scoped. We’re changing the Talent to be more consistently useful by giving the player a temporary Attack Damage buff that procs when they first hit a crowd controlled target.

Developer Comments: We have been trying our best to support and balance the ‘mage’ versus ‘auto-attack’ builds that Falstad has access to, but continue to teeter-totter as small changes to popular Talents tend to dictate full build-paths. The changes Falstad is receiving may seem massive (and to an extent they are), but we tried our best to keep his current builds intact while opening some new and exciting combinations. Overall, we are not hoping for a huge swing in power in one direction or the other, but to open up more compelling choices at each Talent tier.

Developer Comments: We are hearing your feedback about Kerrigan. Although the changes this patch are very minor, we are full aware of the community’s support and enthusiasm for revitalizing the Queen of Blades. Although we don’t currently have any extensive changes planned for her, she is definitely on our radar and you can expect to see some more tweaks coming soon™.

Developer Comments: After our last round of changes, Li-Ming’s win rate and overall balance has leveled into a great spot. However, we felt that there were a couple of changes to her level 20 Talents that would help them better fit her intended design goals. Both Tal Rasha’s Elements and Disintegrate will now take a bit more planning and finesse to execute to their max potential.

Developer Comments: While one of the core components of Li Li’s design has been that she does not target her Abilities, we were not happy with Herbal Cleanse and its odd usability. In addition to some other minor Talent adjustments, we’ve decided to give Cleanse to Li Li to help her compete with other Supports in this area.

Developer Comments: Stormcaller has been changed so that it offers a little different gameplay than Spiritwalker’s Grace. While they both restore Mana, Stormcaller will offer a higher reward but not have the same guarantee as Spiritwalker’s Grace. Each also has different synergies with other Talents. Earthgrasp Totem’s slow duration was nerfed slightly because we found the duration of such a powerful slow on a short cooldown was pretty frustrating to play against.

Developer Comments: We want Anub’arak to be a Warrior who is good against enemy spell casters, so we gave him some Talents that point him in that direction. We also saw an opportunity to improve his Talent tree, as many of his Talents are outdated. He should feel much better at diving squishy backline Heroes, and his Talent choices should be more compelling.

Developer Comments: As one of the very first heroes that we created, and one who hasn’t had many changes since his release, Arthas has been on our radar for some time as a Hero whose Talents needed some sprucing up. In addition to giving him some powerful new Talents befitting of the Lich King, we also moved around and modified many of his options so that he has multiple build paths with different playstyles.

Developer Comments: Shadow Charge seems like a really simple Ability, but on the backend there were a lot of technical manipulations to make everything work the way they were intended. These were starting to create odd gameplay and bugs, so we’ve simplified the design of the Ability so that Diablo travels right alongside his victim as they are knocked back, instead of walking really fast toward them.

Developer Comments: We originally tuned Iron Skin to hold a large portion of the power in Johanna’s base-kit. The scaling changes we did in November hurt the strength of the Ability, so we are tuning it up in order to help bring back that original feeling.

Developer Comments: The changes to Muradin were done to help balance out his Talent tree. A few Talents were a bit over or under-tuned, and he kindly offered us his hammer in order to forge some better options.