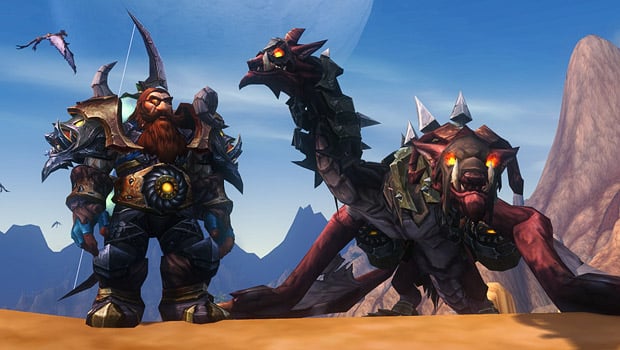 Welcome to Locked and Loaded, Blizzard Watch’s regular column for survival, marksmanship, and beast mastery hunters. This week, your host Adam Koebel (@BendakWoW) will be talking about hunter weapons and stalking rylaks.

Maybe it’s just me, but a hunter tier set without “stalker” affixed to the name doesn’t feel like a true hunter set. Now, after an Unblinking Vigil that lasted over a year, we’re back in true hunter form as Rylakstalkers.

Today we’re going to talk a little bit about the best hunter loot from Blackrock Foundry, touch on stat priorities, and finish things off with a few more questions and answers. While I’m not covering LFR loot specifically, I will mention some of the more notable pieces in each section.

If you frequently swap between specs and don’t want to re-enchant and re-gem every time you do, then multistrike is the recommended path as it’s valued by all hunter specs. 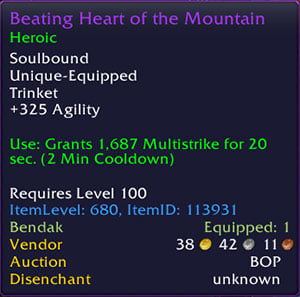 Scales of Doom from The Butcher

While these are technically the best for each spec, all 3 of the Blackrock Foundry trinkets work well for beast mastery and marksmanship. In survival’s case, the Meaty Dragonspine Trophy’s haste proc is mostly wasted, but of course it can still be better than some lower item level trinkets. The trinket from Blackhand is going to be hard to get for most players, but the Scales of Doom from Highmaul is still relevant.

Alternatively, if you have the gold to spend you should look into the Lucky Double-Sided Coin and Stone of Fire trinkets. Both will serve you well as you wait for the bosses to give up their loot, and they are certainly better than any other pre-raid trinkets.

In LFR, the only notable trinket is Blackheart Enforcer’s Medallion from Iron Maidens (wing 3).

Let’s be honest. When it comes to weapons, beggars can’t be choosers. The best-in-slot weapon is only applicable if you have an actual choice between the two of them at the same item level. Otherwise, just get the highest level weapon you can. The Spearlauncher also gets some bonus points for actually shooting spears!

Marksmanship: Mouth of the Fury from Blast Furnace

Tier 17 was a bit of a disappointment in the ranged weapon department, with only 3 possible weapons across 17 bosses. Not only that, but the two best weapons drop from end-wing bosses. Back in Siege of Orgrimmar, we had 5 total ranged weapons across 14 bosses and it was alot easier to get your hands on one. Hopefully tier 18 is less skimpy.

Thankfully, there is Shrediron’s Shredder: the poor hunter’s raiding weapon. It can be upgraded to 670 and is a decent placeholder while you wait for a better one. It also has the added perk of being able to change its stats to suit your spec.

In LFR, you have the Crack-Shot Longrifle from Operator Thogar, but I would still recommend an upgraded Shrediron’s Shredder over this. 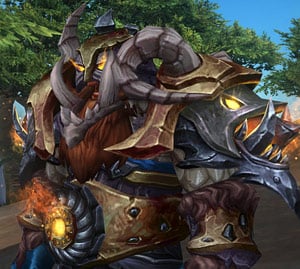 Having 4 pieces of Rylakstalker armor is obviously best-in-slot for all specs. You should complete your set bonuses as fast as you can. That means using lower item level versions if necessary.

The 2-piece bonus uses RPPM so it’s very random. On average, you can expect to be using Bestial Wrath every 40-45 seconds instead of every 1 minute. The 4-piece bonus summons an extra pet similar to a Stampede pet (auto attacks only), but it does twice the DPS of a normal Stampede pet.

The 2-piece bonus means you will have a guaranteed two Lock and Load procs for every Black Arrow. The 4-piece bonus has its duration extended by 3 seconds for each Explosive Shot, meaning it is possible to have nearly full uptime thanks to Lock and Load.

The 2-piece bonus increases your total focus return from Aimed Shot crits to 28. If you’re lucky enough to get a Chimaera Shot or Aimed Shot crit in the last second of your Rapid Fire, it will hit like a truck!

Once you’ve assembled 4 tier pieces, you may want to consider crafted leatherworking armor (or engineering goggles) for your offset piece since you can choose your top two stats. Outside of crafting, some of the recommended offset pieces are Grips of Rekindling (beast mastery), Legguards of the Stampede (survival), and Chestguard of the Siegemaker (marksmanship).

If you only raid LFR, you will want to look into collecting the Ashlink armor set. Not just for the set bonuses, but because the armor itself is higher item level than normal LFR armor. This gear is more than enough to get into normal mode raiding. 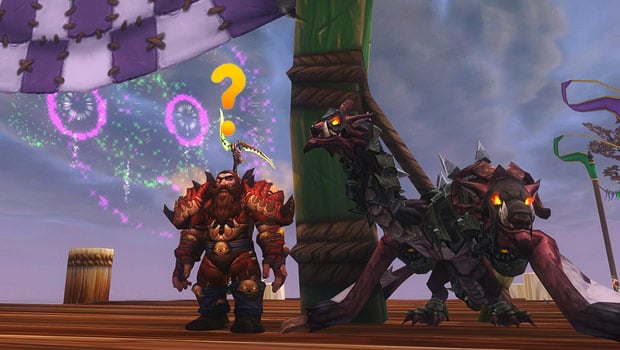 Jorsha asked:
Do you think there would be any chance that we would be able to display our tamed Hunter pets in our garrisons? I’ve got my battle pets wandering around and my favorite mounts hanging out in the stable, so why can’t my hunter pets join the party?

I actively “campaigned” for such a feature during the Warlords alpha/beta, but obviously I was unsuccessful. Our followers are already wandering about, so it doesn’t seem like it would be too big of a deal to pull out some of our stabled pets and have them do the same. I don’t think it’s really a priority though, so I wouldn’t expect it.

Toofdoctor asked:
How does Stampede function with Lone Wolf? If I activate Stampede do I lose my Lone Wolf buff for the 40 sec. it’s active?

Pets summoned by Stampede do not remove the Lone Wolf buff. However, Stampede and Lone Wolf are very buggy right now, especially if you have any exotic pets in your roster. Only your non-exotics will be summoned, and if your last summoned pet was an exotic, Stampede won’t summon any pets at all! Yikes!

In order for Stampede to work properly with Lone Wolf, you need to make sure your 5 active pets are not exotic. The other option is to have at least one non-exotic pet, summon it, then dismiss it (so the game knows it was your last used pet), and then apply the Glyph of Stampede.

Ghostlands_ asked:
I play BM and I’m finding I’m constantly focus starved during LFR, I spend most of my time just spamming cobra shot to keep myself recharged. :( Is anyone else having this issue? Should I wait until my focus is capped before unleashing all my abilities, or should I just do a couple cobra shots and then a couple abilities and swap it around like that?

You should never cap your focus bar for more than a second or so, but there’s no harm in building it up to a high level (say 80-100) before using some of your focus dumps. Doing so will actually help you use Kill Command on cooldown more reliably. In AoE it can be an uphill battle because of the high cost of Multi-Shot. Try to resist the urge of firing back-to-back Multi-Shots as you only need to fire one every 4 seconds for Beast Cleave. Save some focus for an upcoming Kill Command or Barrage, and fill in that downtime with a Cobra Shot instead (unless it will focus cap you). Try being a little more calculating, and a little less spammy with your focus dumps. The exception to this is during Bestial Wrath — go into it with high focus and spam away! Just remember to never sit and wait, always be casting something.