Arcane Sanctum: Getting around Draenor as a Mage 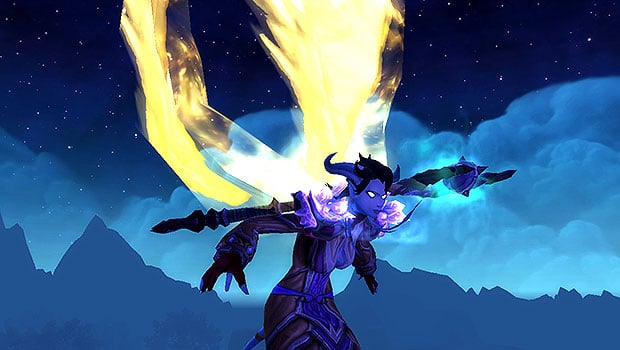 There are many strong opinions about the future of flight in World of Warcraft. Personally, much of what Matthew Rossi said in his piece resonates with me. Erstwhile Frost Mage theorycrafter Lhivera even spoke up about it and I agree with much of what he had to say, too.

We’re not here to get into a debate about that, though. Instead, we’re going to consider how to best muddle along with the current status quo while still getting where we need to go. Mages have many options only available to us when it comes to plodding along on the ground. We’ll start off with transportation aids that aren’t class specific and then move on to the good, Mage only stuff.

There are two garrison buildings that you can construct to make getting around Draenor a bit easier. The first and most obvious one is the Mage Tower/Spirit Lodge. A level three Mage Tower will allow you to choose three zones in Draenor to build a portal to. Once you’ve chosen and constructed these portals, you’ll have an easy way to teleport around Draenor. It also allows the collection of Ogre Waystones which can be used for Mage Tower work orders. These produce Apexis Crystals and occasionally a Mission Completion Order that completes any mission instantly. The Mage Tower occupies a Large building slot.

The second garrison building that can help you get around is the Stables. You might want to consider building it if you’re often out in the world. In addition to the mounts you can obtain by doing the dailies, at level one the Stables allows you to remain mounted while interacting with objects in outdoor Draenor zones. Level two prevents you from being dazed while mounted in outdoor Draenor zones, and level three increases your mount speed in Draenor by 20%.

Of course, we still have our baseline teleport to get to Stormshield/Warspear. If you use the minor Glyph of Rapid Teleportation, it gives you a major 70% speed boost no matter where you’ve teleported for a whole minute. This can really help speed up your errands and in some cases you don’t even have to mount up because you can run around instead.

Would you be surprised if I told you that you have yet another instant Draenor teleport that you’re probably not making use of? Yes, it’s your Hearthstone! Pick an Innkeeper from any zone and set your hearth there. It shouldn’t be Stormshield/Warspear because we can already teleport there anyway. Now you have an easy way to hop to at least one other zone almost instantly. 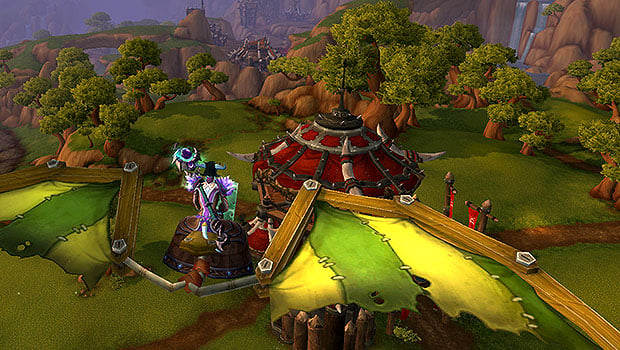 There are actually ways to fly across at least part of a zone in Draenor, none of them class-specific. The first is Aviana’s Feather – obtained from the quest Aviana’s Request (requires having the Inn built in your garrison), this item allows you to activate it and catapults you straight up into the air. When you reach maximum height, ethereal wings unfurl that function much like a glider. Just point yourself in any direction and you’ll head there, gradually losing altitude as you go. There’s also the “Skyterror” Personal Delivery System from the Gnomish Gearworks/Goblin Workshop that functions similarly, and you can obtain it if you’ve constructed this Large building in your garrison.

Goblin Glider Kits work a little differently, you can use them to glide a short distance but it’s dependent on the height you started from. They don’t launch you upwards. So you’ll have to find a high place or an incline before launching your glider. With all of these devices, any collision from above or below (being underneath a tree upon launch, or being hit from below by the rock runes in Blackrock Foundry) will cancel the effect. You don’t need to be an engineer to use the Goblin Glider Kit, either, so you can always have some on hand.

Invisibility and Greater Invisibility, of course, can help you slip past any enemies you don’t want to see you. Note that in Nagrand if you built the Corral and have the Telaari Talbuk or Frostwolf War Wolf ability, Invisibility can be cast while mounted so you won’t even be slowed down as you run past.

Of course you already own Bipsi’s Bobbing Berg. But if you don’t, you can buy it from Nat Pagle in Krasarang Wilds if you’re at least Revered with the Anglers. I love this item. It’s Mage-only, and functions the same as the Anglers Fishing Raft except that it’s an iceberg. When you find yourself needing to cross a body of water and if you don’t have the Azure Water Strider mount (or you want to employ some Mage panache) use your ‘berg! Also, if you have the Nagrand Corral perk and you use the Berg, this happens: 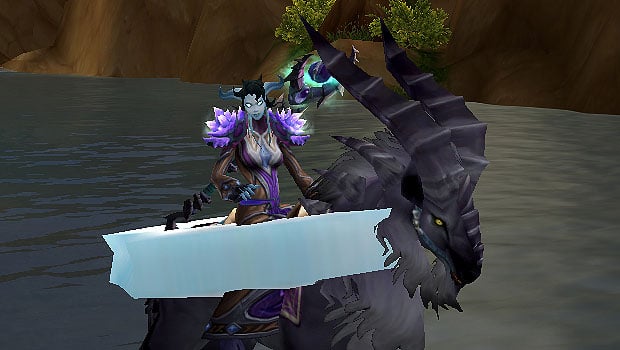 If that’s not the greatest thing you’ve seen today, then you lead a more exciting life than mine. Apart from the hilarity of your own iceberg waist decoration, the ‘berg is very helpful for getting around. You can even use it inside Blackrock Foundry near Iron Maidens. It will disappear if you’re attacked by anything, though, so be careful.

Now we’re getting into the real meat of possibilities available to mages when it comes to traveling across the landscape. Using Slow Fall for more than just “Oh no, I’m falling and I don’t want to die” is a bit of an art. If it’s a dusty, forgotten button on your bars you may need to play around with it a bit before you get the hang of it. It can be used in a number of ways.

One of these is just to get somewhere faster. Suppose your Aviana’s Feather is on cooldown. Find the highest point of a zone, Slow Fall yourself and then get back on your mount, and jump off being sure to face the direction that you wanted to go. You can also use Slow Fall for jumping puzzles, particularly in Nagrand. The thing to keep in mind is that once you’ve jumped and you’re slowfalling, you’ll still maintain your momentum even as you lose altitude. So if you get a running start, you’ll travel a bit further than if you just dribble off the edge of a cliff. This can also work against you, because you may overshoot where you want to land. Never fear, though — if you cancel your Slow Fall, you can land with a fair bit of precision as you’ll fall straight down. This is where Ice Block comes in, if you need it. Remember, mages should never die to falling deaths. Even better than Ice Block is a well-timed Blink. If you Blink while you’re falling and you’re close enough to the ground, you’ll be transported instantly to solid earth. So you really have no excuse when it comes to avoiding sudden stops!

Blink can also be used to avoid falling off the edge of cliffs, of course, or just to get somewhere faster while you are questing or fighting on foot. It’s worth noting that all of these abilities can also be combined with some of the things that were mentioned before.

So, for example, you can cast Slow Fall on yourself while you’re currently using either Aviana’s Feather or a Goblin Glider. At any point if you’d like to change your trajectory, you can always Slow Fall and then cancel the Feather or Glider buff. Then cancel Slow Fall or Blink to make yourself fall straight down onto your intended target.

All of this might take a bit of practice, but it’s an important aspect of a Mage’s arsenal. You may have not had to employ many of these tricks in awhile (I have fond memories of leaping and gliding across Dragonblight, myself) but remembering that they exist can help somewhat as we remain flightless in Draenor for now.

Blizzard Watch is made possible by people like you.
Please consider supporting our Patreon!
Filed Under: Arcane Sanctum, Flight, Flying In Draenor, Mages, No Flying In Warlords Of Draenor
Advertisement