Spiritual Guidance: Training your Withered as a healing Priest 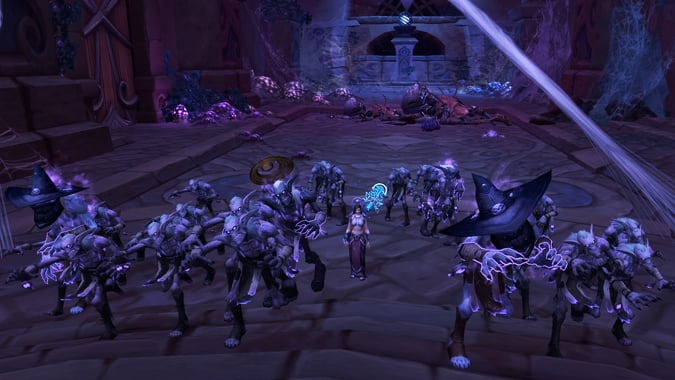 Doing Withered Training as a healer appears impossible, but it’s not actually hard. The secret is crowd control and letting your army do the work. Holy surprisingly has great crowd control via Chastise + Censure, making training a breeze once you figure out the intricacies. 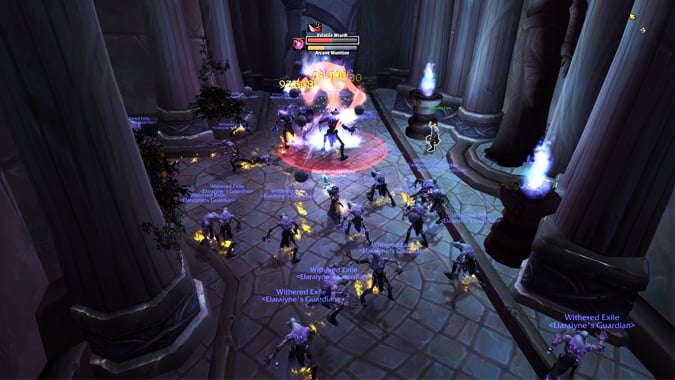 If you’re just starting out and have no clue what to do, you have two main goals: get chests and get the highest score possible. Every trash mob you kill increases your score and the higher the score, the better rewards you’ll get. You’ll always get a main chest at the end of the scenario, but you can collect other one-time chests that contain specific, permanent items that increase your Withereds’ survivability.

You need 400 Ancient Mana to start the scenario, though more mana can bring more Withered. When you’re starting out, you’ll be going in with 8 just because of the mana cap until you raise it through questing. But when you get higher, taking in the max amount of Withered possible really does make it easier. It’s very easy to farm mana if you’re low, there’s a lot in the Vineyard and around Suramar city. You can also grab the Manaseeker shoulder enchant at Honored from Thalyssra, which contains mana and potions. 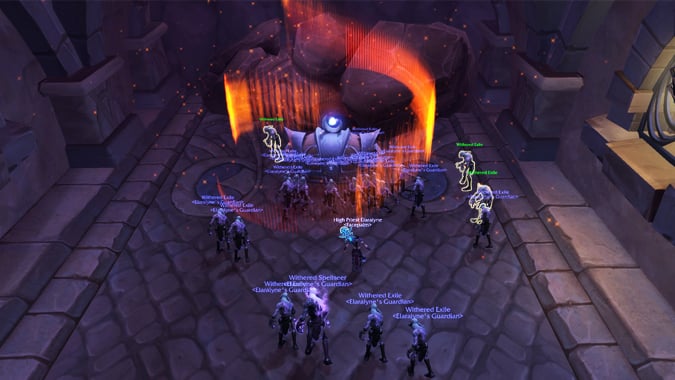 The first couple times you go in, concentrate on grabbing a chest each time and then going as far into the tunnels as you can to increase your score. By collecting at least one chest, you get one of the power items and increase your army’s power for the next time you go in. Each subsequent trip in becomes easier and eventually you can run around with your hobo army annihilating everything in sight.

You can progress into the tunnels until you feel it’s too dangerous, then turning back and sacrificing Withered to bring a chest back to Thalyssra. Or you can exchange your Withered the first time you come upon a chest and progress as far as you can with fewer Withered. I always played it safe and turned in chests as soon as possible, since I never knew when Dro would sneak up on me and ruin my day.

Once you start getting upgrades from chests, you can focus on increasing your score. If you’re trying to build Nightfallen rep, try to get to 400 each time, since this will give you the max amount of rep tokens from the main chest (425 rep). 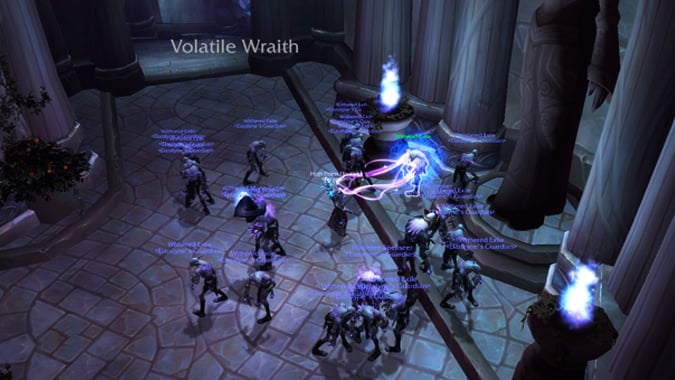 As your army gets stronger through upgrades, you’ll lose fewer Withered to mobs and bosses. There are plenty of additional Withered Exiles scattered throughout the tunnels, both in plain sight and hidden in webs. For this reason you’ll always want to kill the Webbed Victims in case there’s a friendly Withered waiting for you. If it’s hostile, then it just adds to your score when you kill it. At your strongest, you’ll probably have around 55 Withered following you like puppies.

Your Withered have two stances: Mayhem!, which increases their DPS but lowers their focus, and Follow Me!, which makes them focus your target. Mayhem is great for bosses but be careful if you haven’t cleared an area, since they’ll attack everything in sight. The most dangerous mobs are the Volatile Wraiths. These have explosive attacks and a final explosion that will damage a lot of your Withered. You’ll want to save your stun for these attacks. 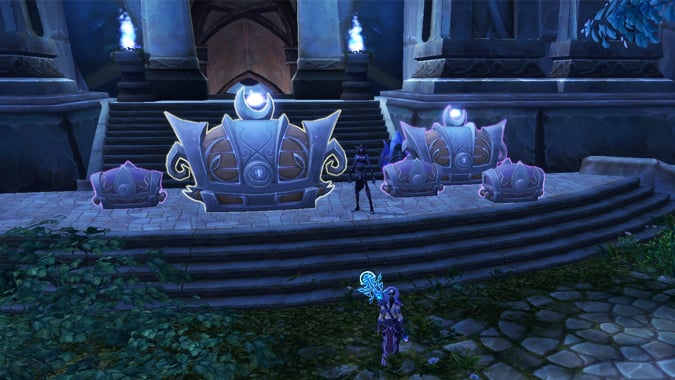 There are small chests scattered all throughout the tunnels, and they can even appear in an area you’ve already cleared. They contain gold, mana, and sometimes Blood of Sargeras. Then there are the larger chests that contain upgrades at the end. To pick them up, you have to exchange 5 or 10 Withered to take it back to Thalyssra, where you can loot it when you die or finish the scenario. Ideally you’ll pick up a chest each time and then maximize your score, so that you can always get an upgrade as well as items from the main chest. If you want to see the locations of the chests and bosses, Wowhead has some great maps.

Glimmering Chests: cost 10 Withered and have items that turn your Withered into powerful units that do more damage, knock back, and taunt.

Some of these chests are supposed to be hidden until you get the Lenses, but Wowhead says that it is currently bugged and you can see them without it. 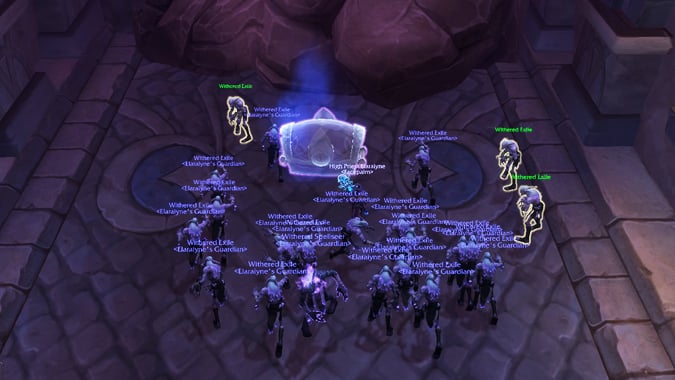 Treasure Chests: cost 5 Withered and have items that permanently buff your army, plus toys and fun things.

The regular chest you always get contains rep items, gear, order resources, artifact power, and has a small chance for toys or Torn Invitation for Volpin. 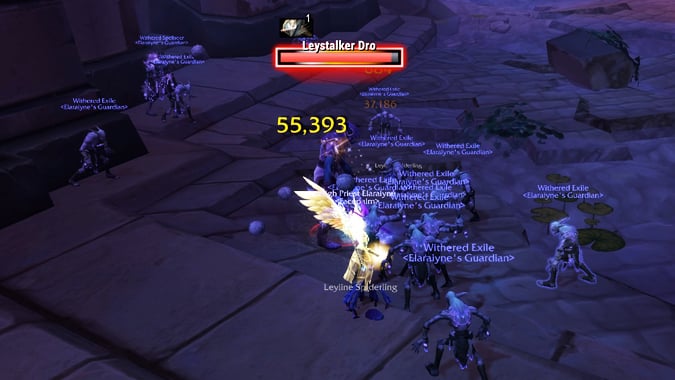 There are bosses scattered in the big rooms, usually guarding chests or Withered Exiles. Some doors are gated by the amount of Withered you have. The two main challenges are Dro and Furog, and your adventures will likely end at either of these two until you get stronger. 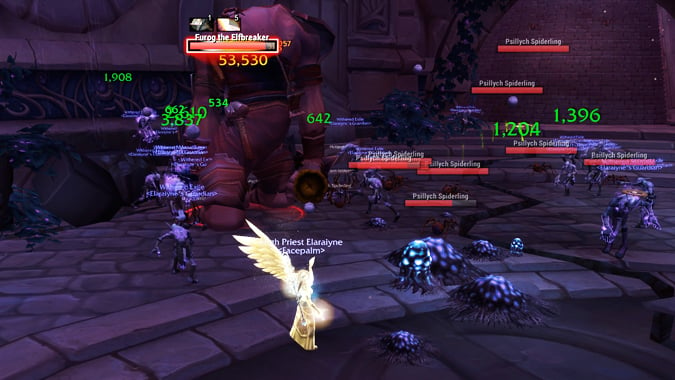 The secret as a healer

You’ve probably heard that tank specs have the easiest time of this, which is true, precisely because they are able to control so much of the scenario. However, the main thing is crowd control, which is the secret to success as a healer. I strongly suggest going Holy for Withered Training. I know it doesn’t seem like the strong choice, but trust me, it’s surprising with its utility.

Holy’s stun via Chastise and Censure is invaluable, especially combined with Apotheosis. You can nearly handle Dro (and Furog later) just with this combination alone. The trick is to let your Withered do the bulk of the DPS while you DPS with Smite, healing yourself with Surge of Light procs or Serenity when he starts to hit hard. Your Serendipity lowers the CD on Chastise, and Apotheosis lowers it even more, allowing you to Chastise after every couple of Smites. You’ll be able to Chastise every dash if you time it right, keeping him from killing your Withered. I recommend this talent setup for Holy.

For everything else, take it slow and let your Withered do the DPS while you handle the aggro and interrupts. Your job as a healer is to manage the army. 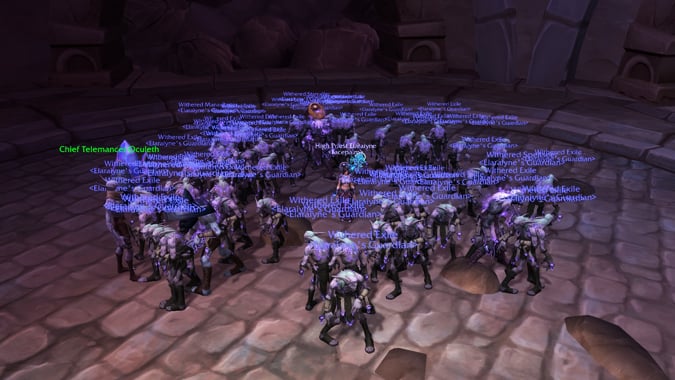 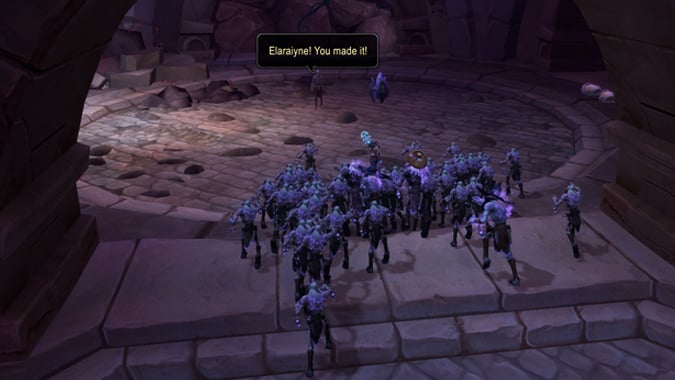