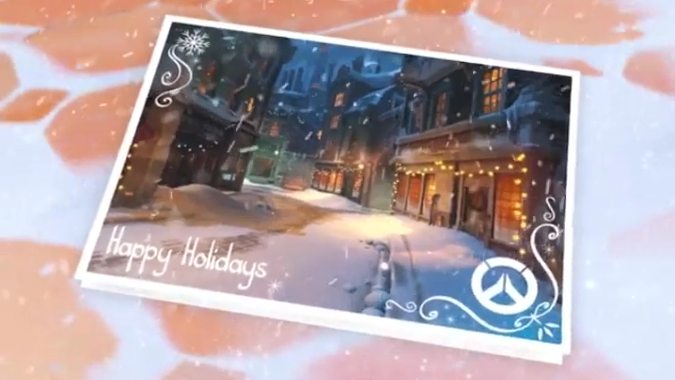 Overwatch has begun teasing a new holiday event set to begin December 13. An invitation was sent to everyone via Twitter:

The card in the short video features a snowy King’s Row, but observant fans notice the tiles on the ground beneath the card are not from King’s Row, but likely Nepal. The rumor mill is already abuzz with what might be included in this event, spurred on by datamining from a user on the Facepunch forums.

There are 4 new map files, so,

2) There will be at least 1 Christmas/Holiday-themed map. There might be up to three. (Possibly celebrating different holidays?)

3) Everyone will be getting a spray, a voice-line, and a victory pose, just like in Halloween.

4) The following people will also get either a costume, an emote, or a highlight intro:

5) The following people will have two of the following: a costume, an emote, and a highlight intro:

And then there’s Torbjörn… Who is getting an emote, a costume AND a highlight intro. (Santabjörn confirmed?)

While the accuracy of this datamining remains to be seen, fans of Blizzard Entertainment’s games have become particularly adept at scraping every last detail out of the game files. Santabjorn, at least, isn’t far-fetched given this tweet from 2014:

Blizzard Watch is made possible by people like you.
Please consider supporting our Patreon!
Filed Under: Holiday Event
Advertisement