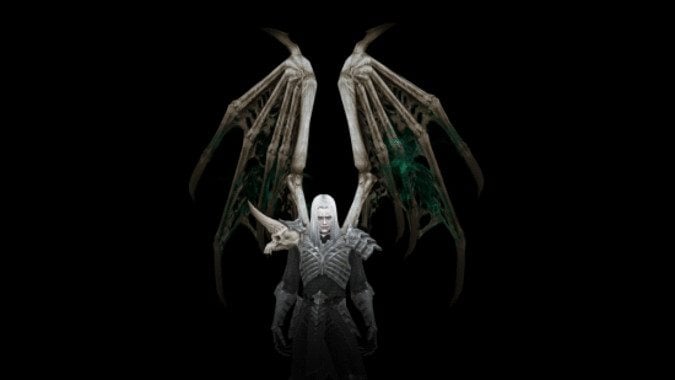 If you’re planning on picking up Rise of the Necromancer in Diablo 3 because, well, you want to play a Necromancer (the main selling point of the pack) there will be more than just the new class when you can finally pick it up. A host of other items will be vouchsafed you upon your first grasp of the power of the Necromancer.

For starters, you get the Half-Formed Golem pet, which is admittedly as disturbing as you might expect (it’s not pretty). Next up you’ll get the Wings of the Crypt Guardian, which are as you might expect giant skeletal wings and look real darn creepy. It’s sort of the Necromancer aesthetic, after all. There’s also a banner shape, banner sigil, a Necromancer portrait and a Blood Master pennant as part of the pack.

We still don’t know exactly when the pack will be released or how much it will cost, but with the Necromancer currently on the PTR and Season 10 likely to wrap up soon, we hope this info is just around the corner. But for now we do know you can have a half-made corpse monster following you around while your bone wings unfurl in the chill air of the tomb when you finally get it. Yay!

Blizzard Watch is made possible by people like you.
Please consider supporting our Patreon!
Filed Under: Bonus Items, Rise Of The Necromancer
Advertisement