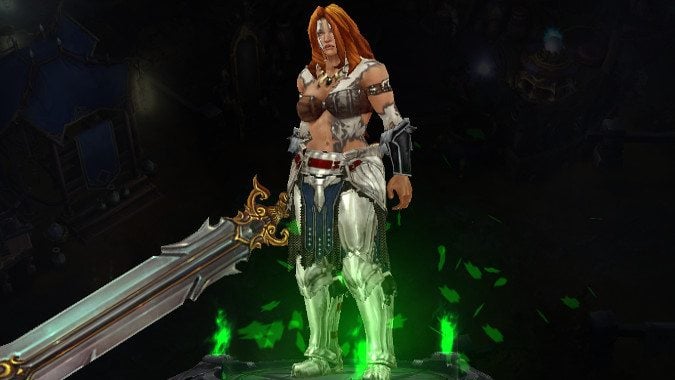 My Season 11 Barbarian has 3 levels to go to hit 70 and I just killed Malthael, so it’s Adventure Mode for now. I’m still using the Seismic Slam build — I know it’s not the best GR clearing build, but I’m not likely to do Greater Rifts any time soon, so I’m just plugging away at my own pace.

Question for the Queue: If I unlock the PvP artifact skin on my hunter will my other hunters be able to use it?

No. Your Artifact appearances, even ones based on stuff like PvP or “do 200 world quests with hidden artifact appearance” don’t transfer to alts of the same class. Trust me, I know what I’m talking about here. All my Warriors are at a different stage of Artifact Appearances.

Q4 Rossi, after listening to this week’s podcast, why don’t you like Mitch’s humor?

I’m a lot older than he is, and our life experiences/frames of reference are substantially different. It’s not a major deal. I don’t share Alex’s sense of humor either, nobody ever made a big deal out of that.

Q4tQ: What do you think we’ll abbreviate the 7.3 raid as, Ant, ABT, or something else?

So fun fact: You can get the rare Suramar fox mount quest on an alt even if you’ve completed it on your main and have the mount. I’m at the last stage. It’s BoP so I can’t sell it. Any suggestions on how to deal with the quest? Finish it and just vendor sell? Or is there another option?

Find Lotharfox’s character. Open trade with him. Put the fox mount in the window, if it will let you. Make sure you are already mounted on the Fox mount you already have. Cackle, if you have a good evil one ready to go.

Q4tQ: This question has been asked in various forms for a few months now, but we’re now officially and likely one month away from the next great crossroads in WoW, meaning at Gamescom, we begin on one of three new roads:

1) Blizzard announces the next WoW expansion at Gamescom
2) They hold it off until Blizzcon
3) Some weird 3rd fork that few have considered, like Legion effectively lasting for years and WoW adopting some kind of modular “just more and more patches with new landmasses but same max level” or some other oddity… announced either at Gamescom or Blizzcon.

Which is it going to be? Speculation question, obviously.

My money and my hopes are on option one purely because I think 7.3 is too close to hold off on a dead PTR until Blizzcon (as I’d expect 7.3.5 to have a twist toward the next expansion).

I’ll go even further though and say that the *next* expansion will potentially be leaning us toward option three. Some elements of the PTR’s offerings are, in my opinion, paving the way for modular “you disembark here” presentation… and if boats and the high seas (or perhaps other worlds) are involved with the next expansion… well, that’s quite perfect.

Blizzard will keep releasing WoW expansions as long as there’s profit in doing so, and considering that both Warlords and Legion sold about three million units their first month, I expect there will be a new expansion at some point. Will it be at Gamescom? I don’t know. Unlike when they announced Legion, this time there’s no pressure to announce a new expansion — we don’t even have 7.3 live yet. So while I do think there will be an expansion announced, and I think it will likely be this year, I have no idea if it will be at Gamescom or BlizzCon.

If I were gambling? I’d go with BlizzCon. Blizzard is a multiple game company now and Overwatch/Hearthstone will likely be featured at Gamescom, so I’m expecting WoW to wait until BlizzCon this year.

My heart wants to go with the ZGMF-X10A Freedom from Gundam Seed, but I feel you have to respect the classic and go with Voltron.

In WoW it’s XT. I have no idea why, but I love that creepy child robot.

Otherwise it’s Gaiking. I watched the original series as part of the Force Five block back in the early 80’s and I’ve always liked the idea of a giant robot that’s the head of an even bigger giant dragon robot.

I also think Void Reaver and The Big O are pretty cool.

Blizzard Watch is made possible by people like you.
Please consider supporting our Patreon!
Filed Under: Big Robots, Diablo-3, Season 11
Advertisement