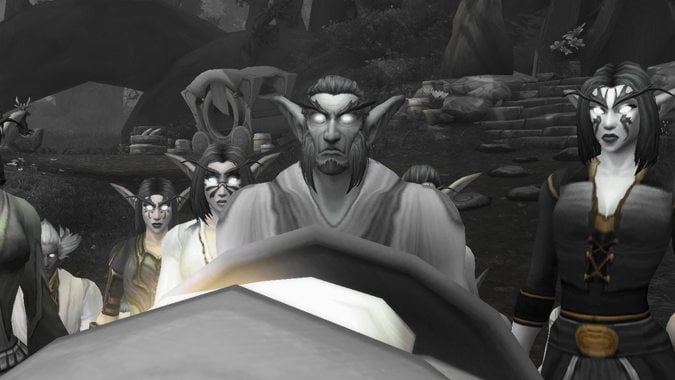 So is carting babies out to the town square and givin’ ’em a good look just a normal part of Kaldorei society? I mean, does this happen with every kid? If Tyrande and Malfurion ever actually produced an offspring, would they prop it up mid-Darnassus somewhere so people could just take a solid gander at the thing? Or are births so few and far between that the Night Elves feel it necessary to put them on display just to, you know, remind people what babies look like?

Okay that last thought is a little sad, in hindsight. Let’s answer your questions instead.

QftQ: Can someone kindly explain the 7.3 fishing stuff to me simply? I have a vague idea of what’s going on but Wowhead’s charts and lists and endless lists of items are confusing and overcomplicated.

Patch 7.3 introduced six new NPCs around the Broken Isles. They work similarly to the NPCs out in Halfhill, or Conjurer Margoss. Essentially, you fish up items that they like, and hand it over to earn some reputation with each. Once you’re a high enough reputation, you can purchase items from each of them. Most of these items are fishing bobbers, but there’s also lures, a toy to increase your fishing skill, a pet, and a shirt.

If you max out your reputation with all six new NPCs, you get an achievement and a new appearance for the Underlight Angler. It’s not too complicated, it’s just time consuming — which, if we’re going to be honest here, is pretty much what fishing is all about in WoW.

Q4tQ: with all of the to-do about the Brothers Stormrage in this expansion, up to and including the earliest moments of their lives, why do we never hear about Ma and Pa Stormrage? Are they mentioned anywhere, or even named? I get the impression that the boys were fished out of the water, or hatched from eggs. I know they both have wings, but still.

We don’t actually know anything at all about their parents. I’d had a little hope that maybe we’d at least see them in Xera’s Illidan-centric flashbacks, but no dice. I mean, you’d think that mom and pops would be around for the traditional “let’s get together and look at some babies” the Kaldorei appear to be keen on, but apparently they were no-shows.

If it’s any consolation, we also have no idea who Tyrande’s parents were. I think we can safely assume that all of these people were likely killed before or during the War of the Ancients — sure, they weren’t mentioned in the novels or short stories, but it’s as likely as anything else.

Q4tQ: What is a good way to not have your alts become under geared from just lvling them up in the invasions? Example is my Shaman, she is in WoD blues because I lvled her to 100 and stopped back then, but she is 105 and is getting squishy. I’d also rather not buy all the Heirlooms for all the armor sets when I don’t have alts of every class. (I only have a sham, DK and maybe a DH that I want to lvl up still).

If you’re playing an alt, presumably you have a main with a bankroll. Go grab some cheap greens off the Auction House for the easiest way to get a quick boost. Alternatively, do a few quests in a zone that you don’t mind questing in.

I usually start with Val’Sharah, just because I like the scenery. The last alt I leveled got all the way through Val’Sharah, through the main quest in Azuna, and…that’s about it to hit 110. The rest was done via invasions.

I know, that sort of defeats the purpose of leveling just via invasions, but really — you aren’t going to get a full set of gear from doing those things. Might as well either pony up the cash to get some greens, or suck it up and do a few quests here and there for some quick upgrades. At least with the quests, you get additional XP on top of gear, you know?

So after Legion what will be the greatest unsolved mystery of World of Warcraft?

Well, we’ve still got plenty of unraveling to do as far as the Old Gods are concerned. And I’m still wondering where the heck Wrathion’s wandered off to. Also, Jaina’s whereabout are still a big question mark. And there’s the matter of Zandalar — did the island sink? Where is Zul? Also, are we ever going to see what happened to Undermine? Is the place still okay, or did it get destroyed in the aftermath of Deathwing doing a number on Kezan?

There’s still a lot of mysteries out there to be solved. WoW’s got a lot of tales left to tell — Sargeras and the Burning Legion form a big chunk of that story, but they definitely aren’t the only story in the Warcraft cosmos.

Is there any way to get order hall followers if you have leveled without questing? Ice done 3 toons with missions & invasions. only have 4

It depends on the class, but I think every class has at least a couple of followers that can only be obtained by doing quests. Look around your Order Hall and do the campaign, you should run across the quests to obtain your followers while doing it. At bare minimum, doing the Order Hall campaign should bump that total up to 6, I believe. Doing the Broken Shore campaign will net you another follower, and open access to your class mount quest as well. It’s a lot easier to do the Broken Shore stuff now — you don’t have to wait forever in between parts.

@CADGUYDVK ASKED VIA TWITTER:
Any idea what Blizz is going to do for Hearthstone at Blizzcon? The world championships are in January so they need an event for Blizzcon.

They actually do have an event planned! BlizzCon 2017 will be the site of the Hearthstone Inn-vitational. It’s a team-based competition between three player groups of Hearthstone personalities and pros. We don’t have the exact specifics of how that’s going to play out just yet, but if you keep an eye on the BlizzCon website, they should update with more information as it becomes available. Either way, it should be fun to watch!