The Queue: Vampires or werewolves? 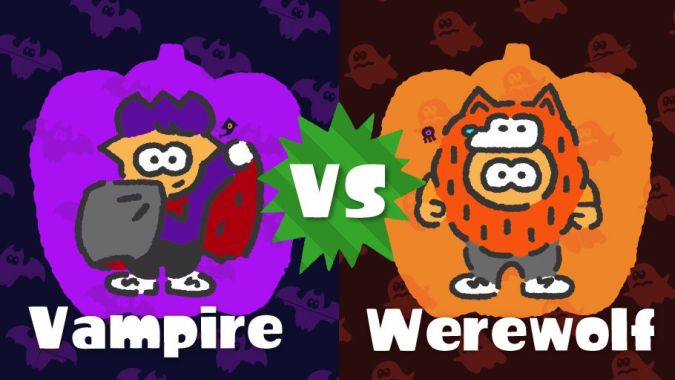 I told you guys Adam wouldn’t be here this week. Who’s ready for some back-to-back Mitch?!

Also, this weekend was yet another Splatfest, with the two choices in North America being vampires and werewolves. I went Team Vampire, which won all three categories (nbd). Apparently they had Team Front Roll vs. Team Back Roll over in Europe last week, but really, anyone who puts the toilet paper on the loop backwards is a monster. And not the good kind, like vampires or werewolves.

SEVERAL OF YOU CELEBRATED NOT GETTING EATEN BY A DINOSAUR:

Guess what? You’ve all been eaten. I declare it. NOW YOU CAN CELEBRATE TOGETHER IN THE BOWELS OF A DINOSAUR!!!

When they reveal Zandalar as the new continent at Blizzcon, what kind of new dinosaurs do we need?

Okay, yes, this is definitely a Rossi question, but I’m gonna take a stab at it anyhow. We’ve never seen sauropod-like dinosaurs, have we? Those could make for some cool scenery, especially if they reached for leaves on tall trees when we weren’t attacking (and before you say anything, we’ve had giraffe-like enemies who attack by swinging their necks, so it’s possible). Parasaurolophi have some pretty cool features on their heads, so let’s toss those in. Oh, and Pachycephalosauri would be fun to watch butt heads in the wild — we haven’t seen them, right?

If we want to really get something unique, I’d actually encourage Blizzard to take some creative liberties and make new dinosaurs, inspired by some of the “weirder”-looking ones out there. Oh, and give me underwater dinos.

Q4tQ: Do you think:
1) Blizzard has a defined story arc for Warcraft (at least internally),
2) everytime they’re set to begin designing a new expansion they have to pull something out their rear?
or
3) They have a greater arc that we’re moving though, but sometimes get side tracked by other ideas.

While I don’t mind a long story, one that’s a never ending soap opera really grates on me since it usually devolves into a series of contrivances and its prone to end without any proper resolution.

{PB}I think it’s a mix of 1 and 3. In terms of big-picture stuff — Vol’jin becoming Warchief (lolRIP), Garrosh going bad, Varian dying, and so forth — Blizzard is absolutely working several years/expansions in advance. In terms of how we get to those major story beats is more open-ended. For example, Warlords of Draenor was, at some point, going to be about Garrosh gathering the “mongrel” races of Azeroth together, rather than the, well, warlords of Draenor.

But then the smaller stories that tie into new zones — looking at you, Runas — are done more on the fly. Basically, they take my approach to planning a vacation: There are a few “big” places I want to hit while I’m away, but I don’t make an itinerary for every hour of every day, because then when something goes off (which it will), everything gets thrown out of whack.

REMORSE WANTS TO RETURN TO THE GOOD OL’ DAYS:

QftQ: Do you think by trying to push people to play the current WoW expansion as soon as possible they removed the appreciation (love or hate) of lower levels that you simply fly by now? Maybe it’s the nostalgia speaking, but I loved my slow leveling experience back in the day.

I think it depends on what you like to focus on. A lot of people who are coming into the game right now probably aren’t concerned with the earlier stuff, and a lot of the people who have been around for a while probably also understand that feeling of appreciation you mentioned. If you happen to be outside of both those spheres — new to the game, but interested in the story — you won’t have heirlooms, so it’ll be a bit slower. But it’ll still be pretty quick, which leaves it on you to stick around and play for the stories.

Really, you get out from the game what you put in. Unless you’re specifically referring to difficulty of leveling — which can still be artificially made more difficult by eschewing gear — then if you want to appreciate the story, you can always go back and appreciate the story.

TKC HAS ANOTHER QUESTION THAT’S PROBABLY BETTER FOR ROSSI:

Now that Alleria+Turalyon have showed up, what WC lore figure has spent the longest out of the spotlight?

Are we talking in-game time or real-life time? Because in-game time, we haven’t seen N’Zoth (who was technically around during the Black Empire) in veeeeeery long. In real-life time, I don’t actually know. The first two Warcraft games focused a lot on Orc and Human figures, and I think we’ve gone through most, if not all, of them.

FEROCITAS HAS A GREAT TIE-IN TO THE ABOVE:

Q4tQ: I’ve always maintained that Blizzard would never release a Warcraft 4 RTS; they’ll be no way for recapture the depth and impact of the previous titles without adversely effecting the story progressing in WoW.

But from the moment we arrived on Argus, I’ve realised just how much story remains untold on this once beautiful planet. Would anyone else love to see Warcraft 4 set on Argus, after the resolution of our current campaign. With the backdrop of ancient Eredar culture, Titan ruins and Legion strongholds, we could help the Krokuun reclaim their planet, follow the Army of the Light’s future battles, or even explore a Man’ari redemption arc.

I’ve said it before, but I would love to see an RTS that explores the history of the Old Gods during the Black Empire. Maybe have the story be about its formation and rise to its height of power, maybe have it be about the downfall of it all — or do both! You could play as any of the existing races tied to the Old Gods (Aqir, elementals, Zoidbergs) or Blizzard could come up with some new races that fit right in with the Old God enemies we know and praise today.

Q4tQ: Do you think Arthas ever raised his mother into the Scourge?

No, but mostly because Blizzard has this weird thing about Warcraft figures where mothers don’t seem to exist. I think it’s always possible that she could still be raised, however. That might be an interesting storyline if done well.

CUTHBERT GOODALL WANTS TO KNOW IF THE GAME STILL HAS CLASS:

Is there room for another non-magical class?

Absolutely! Every time someone asks about a new class, my go-to is a ranged mail user. Sure, Hunters fill that niche a bit, but they’re pretty lonely there. A ranged mail-wearing class would give us our first ranged DPS added to the game and would help expand the pool of mail-using classes.

Let the class be a tinkerer or something. Throw bombs at enemies, zap creatures with electric gadgets, and do whatever else you might imagine that sort of class to do. Alternatively, introduce a class that can dual-wield pistols (and give Hunters the option of main-handing them so there’s some overlap). Whatever the case, I think there’s room for a non-magical class.

ENO GETS WHAT’S COMING TO HIM:

I’m glad I wasn’t in this Queue.

WELL YOU WON’T BE IN THIS ONE EITHER! HAHAHAHAHAwait…

That’s it for today! I’m back again tomorrow, so don’t troll the comments. If you do, you’ll get eaten by another dinosaur. So sayeth Mitch!