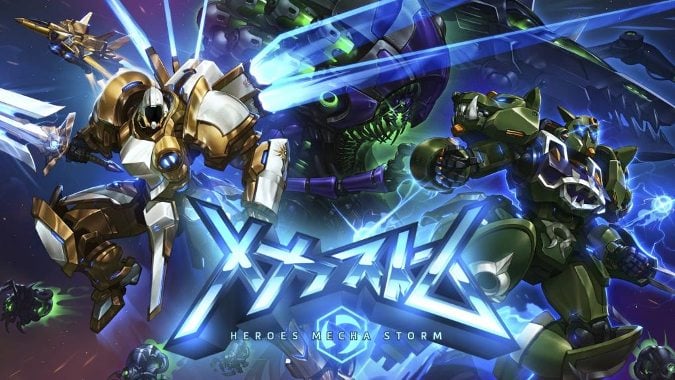 Though the Heroes of the Storm developers have been teasing a Tyrael rework for a while now, none of us quite expected it to arrive out of the blue today. Many of his passive and generic talents have been removed, including the talents that used to augment his trait, in favor of a more active playstyle. His passive Spell Armor has also been removed in favor of slightly higher health and health regen.

But the bigger story here is probably going to be the anime-style teaser trailer that came with the patch. Blizzard didn’t hold back with this one, pitting Mecha Tyrael and Mecha Rehgar against the evil Xenotech Abathur. But enough talking, I’ll just let you see it for yourself:


As for the rest of that Tyrael rework, his mana costs have been marginally reduced, which was a much needed change for the mana-hungry hero, but it might not prove to be too significant a buff: Many of Tyrael’s new talents increase the frequency at which he can use his abilities. The new talent Law and Order, for example, reduces the cooldown on Righteousness for every hero hit by Smite. The new Tyrael might be able to squeeze out more abilities in a shorter period of time, but it’ll very likely leave him with no mana, just like the old Tyrael.

This rework also appears to have focused heavily upon El’druin’s Might as his defining ability. Many of his new talents augment El’druin’s Might — such as enabling double teleports — or give him a variety of power bonuses when El’druin is on the field. With some of these talents, it will be advantageous to keep El’duin on the ground as often as possible for as long as possible, rather than tossing it out the very moment you want to teleport.

Check out the full rework notes below:

This patch also includes the new Mecha skins, one of which belongs to Tyrael himself. Considering the teasers relating to that Tyrael skin, maybe we shouldn’t have been surprised by the timing of this rework at all.

Blizzard Watch is made possible by people like you.
Please consider supporting our Patreon!
Filed Under: Patch Notes, Rework, Tyrael, Tyrael Rework
Advertisement