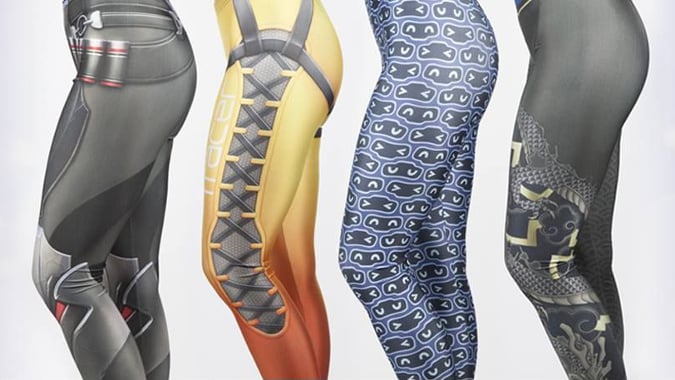 Some of the coolest World of Warcraft fashion came in the form of Wild Bangarang’s leggings, letting ladies get one step closer to their Sylvanas or Demon Hunter power fantasies. Overwatch fans, get hyped, because Wild Bangarang has just released its line of Overwatch leggings, too. There are eight in all, and they all look pretty great.

However, as much as I love cool leggings, I’m a hefty 6’3″ and one shaven head away from looking like a baby-faced biker-gang reject. While I could wear these leggings, it wouldn’t be pleasant for anyone, including myself. That won’t stop me from commenting on which ones I think are the coolest, though.

For the most part, I think the leggings that are a direct adaptation of the in-game designs are the coolest, such as this Widowmaker set:

Wearing something that vaguely resembles the character’s armor is a big part of the appeal, I think. That being said, some of the more abstract designs are still pretty amazing, such as this Sombra-inspired set:

Again, as much as I’d like to be able to wear these things, they’re not really for me. For those of you that can get away with wearing things like this, Wild Bangarang’s first Overwatch collection includes:

Those of you who can actually pull off a pair of leggings, I beg you: Do what I cannot and look rad as hell on my behalf.

Blizzard Watch is made possible by people like you.
Please consider supporting our Patreon!
Filed Under: Fashion, Leggings, Merchandise, Wild Bangarang
Advertisement