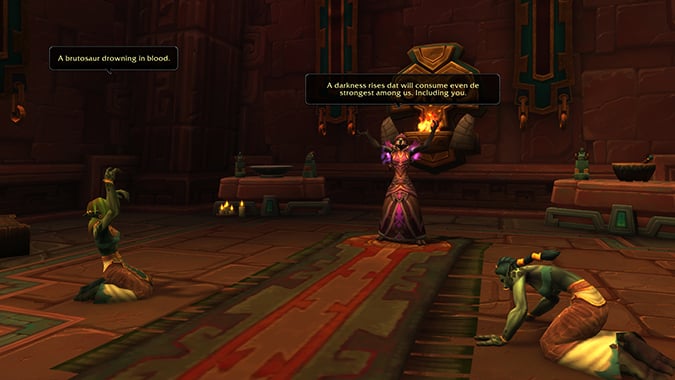 If you haven’t stopped by Madam Konawla’s in the Zocalo, it might be worth a visit — she’ll tell you your fortune. Depending on the results you can get either a lucky or unlucky debuff, both of which appear to do…well, absolutely nothing. The legitimacy of Konawla’s establishment isn’t the only thing that raises questions around here, however, so why don’t we get around to answering the ones you guys have?

Well, technically speaking there’s not exactly a ton of information out there about the Vulpera. They’re nomads, the ones we’ve seen have mostly been a mixture of rogues, warriors, and gunners. They don’t really seem to have any religion to speak of, nor do they appear to be interested in following the Light. Honestly, they appear to be far more invested in simply staying alive and staying out of the clutches of the Sethrak.

Based on what little we know, it appears to be at best highly unlikely.  But given our relative lack of information going in, it’s entirely possible the little guys could surprise us at some point in the future.

If you decapitated a Death Knight, would it kill them or would they become a talking head?

QftQ: Why aren’t we seeing Know Your Lore very often any more? It seems the last one was Feb 4.

I’ve seen this pop up a couple of times so I figured you know, I’ll throw out an answer. Rossi and I are both going through some pretty serious stuff at the moment. While I’m not going to speak for Rossi here, I can speak for myself. However, it’s the kind of intensely personal stuff that I’m not exactly comfortable talking about with a wider audience.

Suffice it to say I am doing okay-ish, but just throwing myself back into the swing of writing has proven far more difficult than I’d really like. I’m seeing someone about this, but there’s not a magical switch I can throw that just makes the writing flow. Needless to say as someone who usually writes a lot, this is really frustrating.

I’d ask that you be patient with the both of us in the meantime, and if you’re jonesing for lore material, we are still putting out Lore Watch every other week for people. It’s a lot easier to focus when I’ve got a couple of people to talk to and we’re all bouncing ideas and theories off of each other.

So the hunter I am idly leveling Horde side is Engineer/Jewelcrafter. They both kind of use a lot of the same mats. Which should I level first?

My Rogue is an Engineer/Jewelcrafter, and I’d say I get far more use right now out of Jewelcrafting than I do Engineering. It’s also been a lot easier to level. But that really depends on what level your Horde character happens to be. If you’re max level already, just focus on Jewelcrafting for the gems.

If you’re still leveling however, I’d say get your Engineering up because there’s a lot of useful trinkets you can make. Heck, just the Flexweave Underlay/Goblin Glider tinker has been tremendously useful to me in every expansion. Any new cloak I get is immediately outfitted with it.

Q4tQ: What relationship in WoW do you wish was explored more? I always wanted to know what kind of relationship Varian and Arthas would have had since Varian turned up in their kingdom as a refugee. Did they have a brotherly relationship? Was he horrified to hear what happened?
I’ll never know now, since they’re both dead, but I’ve always wanted a glimpse into their lives as children.

Honestly I’d really like to see Vereesa’s kids at some point. She has twin sons, Giramar and Galadin, but we’ve never really seen or interacted with them at any point. I mean, I get that she’d want to keep them out of harm’s way, but I’m interested in who they turned out to be. And I’m really interested in how they feel about the whole staying out of sight thing — are they cool with this? Do they want to get out in the world and do something? How are they doing, after their father’s death?

They’re just a couple of characters that are essentially blank slates at this point, but given their bloodline, you’d think they’d be destined for doing some pretty cool things at some point, right?

At Blizzcon I thought the Lucio-O’s cereal was just some kind of One-off novelty thing. Lately though, I’ve been hearing of Lucio’s sightings in Target, and Walmart stores. Are Lucio-O’s actually a real commercial product?

Ohhhh yes, yes they are — and they’re really good. I don’t think they’re going to stick around forever, but I just picked up a box at the local Walmart the other day. I have yet to see them in a “real” grocery store, however. Neither my local Safeway or Kroger stores have them in stock, and I haven’t seen them at the local Target either. You can find boxes for sale on eBay, but they’re all ridiculously marked up, fair warning.

I think they’re just a limited run, but I really hope they stick around. They’re very tasty! I’ve also heard they make excellent cereal bars like Rice Krispie Treats, but I’m sticking with the traditional bowl and milk combo myself.