The Queue: An old half-blind Canadian answers your questions 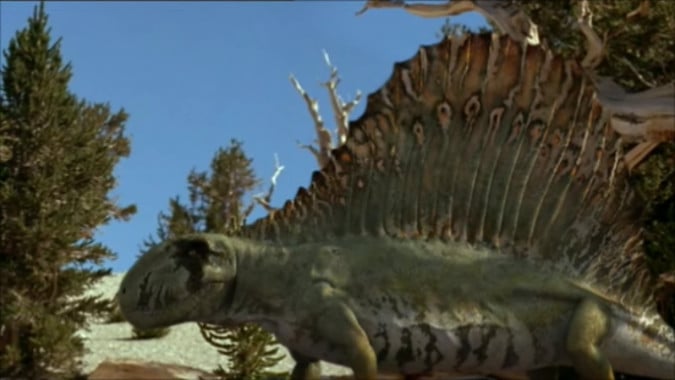 I am absolutely Matthew Rossi and not a talking sword or a striped equid. I’m absolutely not an ancient synapsid fin-backed evolutionary cousin to mammals either. Nope. Don’t ask. I won’t respond.

KALCHEUS HAS NO SCALES AND LACKS A FIN

Foolish human, you are so far from first as to be practically insignificant — for millions upon millions of years life has evolved on this world, struggling to adapt to an ever changing environment and pass its traits on to its offspring. You sincerely think you, a primate that evolved fully only in the last 300,000 years, are first at anything? You’re not even the first hominid tool users!

RJAGODA HAS A VARIETY OF TEETH IN THEIR RATHER FLIMSY SKULL

Q4tQ: What brought you to WI/BW, and when did it happen?

For me, it was sometime in early BC. I was searching for information on warlocks and came across a class article. Been here ever since (off and on, as most everyone knows).

Ahem. I “was talking to my wife please help me a crazy talking pre-mammalian synapsid reptile came through a time portal and grabbed me when she suggested I apply for a job at the site, which was having an open call at the time.”

I do not reread paragraphs, which seems perfectly fine.  I have an extremely limited sense of sight and track mainly by smell, like all humans.

CYPHER IS FILLED WITH DELICIOUS INNARDS AND EASY TO CRUSH BONES

Alright, QftQ: I’ve got a bunch of Transmog auctions dating back to patterns from Mists. They haven’t sold. This includes massively undercutting prices even when no one’s offering the same thing.

I also have some of the rare crafted transmog (including that insane Gyro Hunter Gun) that no one seems to be biting for. At this point should I just considering it money and materials lost and sell to vendor? Should I get rid of the armor stuff but keep Engineer and rare-rare crafted and keep trying?

Keep in mind I’ve been trying to get rid of this stuff since WoD. So….wash my hands of it? Or keep tossing it on the AH?

Like most of your kind, descended from a nocturnal arboreal species that endured the 180 million year tyranny of the swivel-hips, you have forgotten the true power and glory of your synapsid roots. I have come to remind you that long before the rabbit-lizards took their first two legged steps, our kind ruled this world and you are our survivors — it is our legacy that you must carry forward into the future. So forget this hesitancy and clamp your jaws tightly onto your goal and bear down with all the power of your shearing jawline. Guided by the bands of muscle gripping your temporal fenestra, you will not fail.

I mean, as a human, I am aware that our temporal fenestra have technically closed up and ossified, but we still bear the signs of the trait in our skulls. I’m not confused because my skull still has the fenestra because I am not a time traveling synapsid sailback predator from the Permian. Keep trying to do whatever it was you said about your pretend clothes.

I think that Blizzard badly underestimated the affect of making the Horde the really, really bad guy burning down Teldrassil. In one blow Blizzard managed to severely damage both Horde and Alliance morale.

I have nothing but respect for the power of rabbits to utterly destabilize an unprepared ecosystem. You are a powerful animal.

As for the burning down of the fictional tree, I assume the people who crafted the tale assumed that those who chose the Horde as their ‘faction’ (whatever that is) would be all-in for the destruction of Teldrassil, as it was populated by Night Elves and Night Elves are the enemy? I think? I really don’t… can we talk more about rabbits? Of all our inheritors I find them the most astonishing.

No? Sigh. Hold on, I must go into this storage room and absolutely not beat an answer out of anyone I have captive in there while I pretend to be them.

“I personally am a bit confused about why people are surprised that the Horde would burn down Teldrassil, or view it as in any way an unusual or out of character action on their part. Sylvanas used the plague to drive the Gilneans out of their homeland, she’s shown repeatedly a mania for the preservation of her people and a willingness to engage in what could be considered atrocities. I’m not telling you or anyone how to feel dear God help me his breath reeks of carrion and he lacks the teeth to shear meat so he just rips hunks off and swallows it bones and all but it just doesn’t seem that out of character for the Horde to me. If Blizzard made any mistake, it may be that they didn’t understand how the unfinished story would feel to players since they had the benefit of knowing how it all ends.”

RED IS THE COLOR OF YOUR OXYGENATED BLOOD

Q4TQ: are we getting more character slots per server in 8.1.5? The devs mentioned that they wanted to just remove the limit (and allow 50 per server, I assume), but we never got confirmation.

Has anyone tested this on the PTR?

Yes, you will be able to have all 50 of your characters on the same server in patch 8.1.5.

I know this because I am a human.

Goodbye, fellow humans. I will not be found devoured in a few days time, long after the time portal has closed.

Blizzard Watch is made possible by people like you.
Please consider supporting our Patreon!
Filed Under: I Am A Human, Not A Dimetrodon
Advertisement