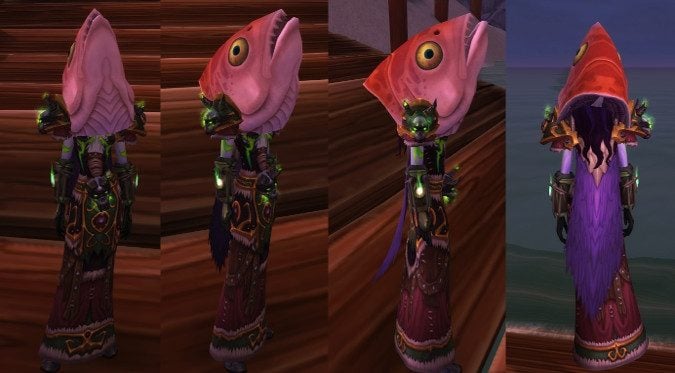 What’s the title, you ask? Well, while in the midst of a discussion about which Disney film should be made live-action, I suggested The Little Mermaid… but with Ariel having the top half of her body as a fish. That led us down a rabbit hole (fish… hole?) of different Disney movies wherein we replaced characters’ top halves with fish bodies. It’s not weird.

But anyway, while you think about which Disney film would be most entertaining with the main characters top-half fish’d — I’d like to see a bunch of Dalmatian-puppy-fish abominations, personally — let’s Queue.

COLD RUN HAS A QUESTION ABOUT OLDER SERVERS:

Q4tQ: If WoW Classic goes reasonably well, do you foresee it just sitting in the final pre-BC incarnation medium-long term (say, 4-5 years out)? Or do you expect people would want a BC-capped server eventually with the option to transfer their characters from classic to BC?

What would you want?

This is something I’ve thought about quite a bit. Not because I have any interest in expansion-locked servers, but because it’s something Blizzard is going to eventually — inevitably — have to confront. The way I see it, the servers can sit where they are or Blizz can wipe them every now and then and start the cycle all over — I really, really do not expect we’ll get different expansion-locked servers/games. Will people want them? I’m sure they will (heck, a lot already do). But I don’t think we’ll get them.

So I guess that answers your question, huh?

The other thing I could maybe see Blizz doing is starting the cycle over, but on a new game server. But that’s a pretty small chance since — at least with current tech — they’d need a new client, rather than just a specific server. Oh, and for the record, I’m fine if Blizz leaves Classic at its final update for all eternity. It would be amusing to play server-specific expansions for a bit, but at a certain point, you need to draw the line. I’ll settle for Classic and current versions of the game just fine.

ENO HAS A BIG-SCALE QUESTION AND A SMALL-SCALE ONE:

Was Xalatath unimpressed with N’zoth in Legion? I don’t remember her saying anything about N’zoth. Seemed like in the cinematic before Crucible that she thought of N’zoth as a a “dear friend”

Besides, N’zoth seems more many-eyed than two eyeballs to me. We probably haven’t seen “all” of it, just like we only saw a little part of Yogg back in the day.

QftQ: Why did Blizzard decide to go with ‘maces’ and not ‘hammers’ as the blanket word for those weapons? I expect a 1000 page essay in the morning

Xal’atath definitely had some voice lines about N’Zoth in Legion. The one I specifically remember is the one about N’Zoth being the weakest of the Old Gods but surviving the longest.

Because then what would Blacksmiths use? Blacksmith… maces?! No way. Hammers are tools. Maces are weapons.

What we really need more of, however, are flails.

I can’t think of any good WoW questions today, so here is a Switch one instead.

Q4tQ: Any hopes / predictions on the next 4 characters to be added to Smash Bros Ultimate?

I’ll be happy with whatever they add as long as it’s not Waluigi because lolololol. Who would I like to see? Banjo-Kazooie, Geno (Mario RPG), Mipha (Breath of the Wild), and Sora (Kingdom Hearts). Will they happen? Who knows! We got a Persona character, so I wouldn’t be surprised by anything at this point.

RED HAS A QUESTION I CAN ONLY ASSUME COMES FROM SOMETHING LOTHARFOX SAID:

Q4TQ: what are cows made out of… on Azeroth?

This is why it is dangerous (for me) to have kids. Sometimes I answer questions simply when it requires a longer answer…and my answer is wrong.
In the following conversation, my ten-year-old son asked all the questions, the answers all came from me:

They’re made of monochromatic sadness. Why do we kill them? For what purpose? None. And they know it. They want to be nothing but digital ones and zeros, but they can’t help but know their fate. They wander, but will inevitably meet the blade or the spell of a random passerby. Before they can retaliate, it’ll be retali-too-late.

And that’s their existence ad infinitum.

Well I did it, I exercised every day for a whole week. Now to keep it up for the rest of my life until I die xD

I don’t have much to add here except that that’s super awesome and you deserve a huge high five! Granted, every day is aiming incredibly high. But still, that much consistency at any point is awesome. You rock!

SPENCER MORGAN CONTINUES TO BE A LOYAL FOLLOWER:

Q4tQ: what first brought you to the church of Mitch?

The promise of everlasting darkness. Knowing what’s coming, even if it’s the Void, is comforting.

My boss just left. Do I A) continue working until 5:15 like I had planned, or B) leave now?

Are you being paid hourly? If so, just work until you’re done with your task and/or your brain can’t take working anymore. You don’t need to be there, but you don’t need to leave because of some other thing that happened.

OF COURSE WE HAVE SOME BOSSES:

Gul’dan, because he really is incredibly powerful.

That’s all for today! Have fun with your fishy comments. And remember: Tomorrow is the first of May. I think you all know what that means.