The Queue: Something Dusty this way cometh 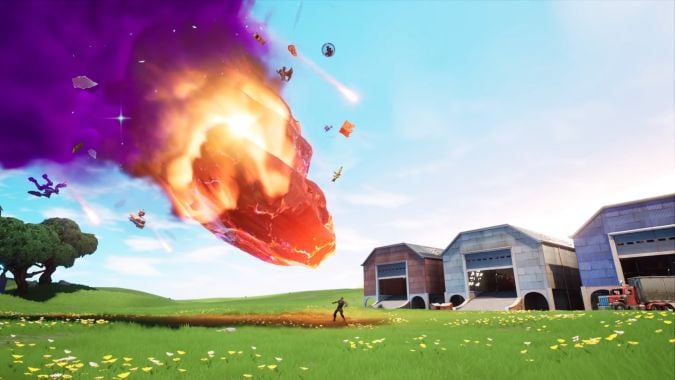 I know it’s been a little while since I’ve chatted about Fortnite, but the game is, in fact, still chugging along. In fact, Season 10 starts today (well, not today as of this writing, but today as of you reading this). This season looks to be taking things back to before the big meteor event that seems to have started Fortnite’s “big event” moments and hype trains. For me — someone who started shortly after the meteor hit — this means I will likely get to check out Dusty Depot, the site destroyed by the meteor. I may not play as much as I used to, but it’s still fun to watch this unfold.

Also, there was a giant mech vs. giant monster fight across the map recently and that’s pretty dope.

DOMEHAMMER IS TIRED. SO VERY TIRED.

Question for the Queue
Are you tired of artifacts? I’m tired of artifacts. A expansion long grind has gotten old fast. In Legion the AP gain was buffed to such ludicrous levels you could at least max out your artifact weapon on alts. I’ve just given up any hope of leveling heart of azeroth on alts as AP is so difficult to get.

I’ve said this before, but I think one of BFA’s biggest issues with endgame content is that Legion did it too well. In theory, there wasn’t reason enough to change something that was working pretty well. But in reality, when players have done WQs, AP grinding, etc. for all of one expansion and then have to do basically the same thing for the next, it wears out its welcome a lot faster.

That said, the issue of AP grinding on alts would still be an issue if this were the first time we had to do the grind. It would be nice if AP were an account-wide thing, especially since we’re not even powering up different Artifacts like we were in Legion. It’s the same item. Just pretend we’re handing it off to our alts.

RJAGODA IS WRONG, BUT WE STILL ACCEPT THEM:

Q4tQ: what’s the worst spec you ever played, in any expansion?

For me I think it was Shadow priest in Legion. Everything felt clunky and not right.

This is a tough question, and not just because of your objectively false follow-up statement. More so, I don’t play a whole lot of alts ever, and the ones I do play rarely ever change what spec they are. I have specs I like, and I stick with those specs.

That said, I’ve never really found Feral Druids to be my thing. Ditto Demonology Warlocks (except during Burning Crusade because lolFelGuard). I guess if I had to pick, it would be those.

MYTHRIAK IS WRONG, BUT WE DO NOT ACCEPT THEM:

Awwww… Liz reminded of my question from last week!!! <3

SILVERKEG WANTS US TO ORGANIZE:

Why not remove “World” First and replacing it with North American, European , Asian First?

Why? Simply put, it’s a completely player-made construct. The World First race is not anything sponsored by Blizzard in any way. In fact, this is the first time Blizzard’s ever even tweeted about the race ahead of time — they even made an official post on how to watch! But they still have nothing to do with the race itself, and players came up with the “World First” moniker. After all, why not go for the biggest and best title if you have control over that?

Given the viewership, it may not be long before Blizzard tries to actually have the WF race be an official thing, but that would change the way lockouts work, among numerous other issues. It’ll be interesting to see the future of the WF race though.

SPENCER MORGAN HAS A QUESTION ABOUT MY FAVORITE TOPIC:

Q4tMitch: how many lesser Mitches have you consumed in your quest to become the One True Mitch?

Q4tMitch: why is society at large so eager to persecute your followers?

Countless. And also none. For once consumed, they are me. They were only ever me. They didn’t exist in any other form.

LEFTY HAS A QUESTION FOR NOT-ME:

Q4SPencer Morgan : what is your fascination with mitch?

Allow me to answer.

When I was younger, I found a car on the side of the road during a snow storm. The driver didn’t know the kitty litter trick to getting out of the snow, so they were stuck. After all, how many Texans would know that trick? There was a 4-year-old in the back, and it had a fever of 102.

At the time, the ambulances were busy with all the snowy accidents that they couldn’t come help the child or its mother.

Knowing the situation, I approached from out of the snow. I told the mother I would push the car while she accelerated and not to stop once she started moving, or else it would get stuck again. They escaped the snow, and the child made it to a doctor, likely saving its life. That child was SPencer Morgan.

Q4TQ: what do you think Sylvanas will do with Xal’atath?

I don’t know. It’s a boring answer, but it’s true. Sylvanas could be aiming to use Knaifu in her bargain with Helya. Maybe the bargain is to claim souls for her, maybe the bargain is something else. Maybe Sylvanas’s plans will backfire and she’ll get trapped in Knaifu without us ever knowing what she had intended.

Whatever happens, I hope we find out before 9.0… but I don’t think that’s likely. Especially if the Void is more prominent next expansion, it would be a good tool for storytelling. Only time will tell.

ENO, DID I ANSWER ONE OF YOUR QUESTIONS ALREADY? NO? OKAY.

Have had a chance to do Heroic Battle for Stromgarde warfront again for i430-i445 rewards on Horde and I like warfronts much better on this difficulty for sure. Helps that the rewards are totally worth it too.

QftQ: For a possible mythic version of warfront do you think they should add a timer, the faster you beat a warfront the better the rewards?
May be something Blizzard is already planning to do though.

As someone who… well, Warfronts were okay the first couple times I did them, but they sort of lost their appeal pretty quickly… anyway, as someone with that view on them, I’m not sure what they could do to make them more interesting or if it would be worth making a Mythic version. Would timers help? Or would they then lose the appeal of “anyone can do what they want to contribute” and boil down to a science of what’s the most optimal route to take?

Really, what I want is Warcraft 4. If not that, then gimme an alternate version in WoW. Just let me solo command things.

QUEEN DILLENE DOESN’T HAVE A QUESTION, BUT I DO HAVE AN ANSWER:

Apparently I was on vacation too long- I’ve forgotten one of the (multiple) passwords I need to log in to one of my systems. It’s so frustrating; we have to change passwords every 60 days and we can never repeat any.

I started using LastPass for work a while back, and my life has changed as a result. You don’t need to remember passwords, and you don’t need to come up with anything on your own. It auto-generates passwords whose length and type of characters you can control. It’s seriously amazing, and the Chrome plugin means I can use it across different devices.

Not to sound like an ad, but I really do love how much easier it’s made all things password related.

Hey, guess what? That’s The Queue for today. I’m kind of amazed it’s already Thursday, but I won’t look a gift Horde in the Helmouth. Or something.

Blizzard Watch is made possible by people like you.
Please consider supporting our Patreon!
Filed Under: Dusty Depot, Fortnite, Fortnite Season 10
Advertisement