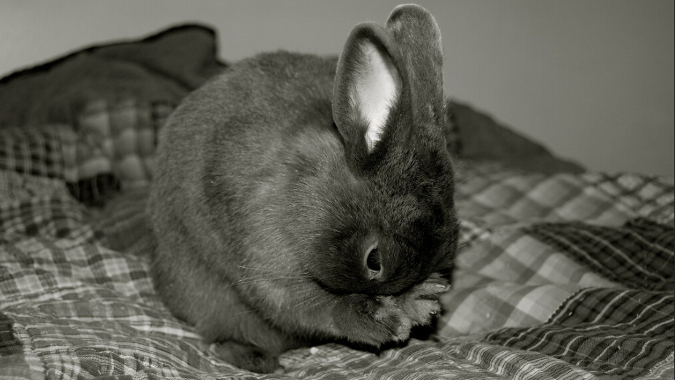 The header image for this Queue is my rabbit Grimalkin. She was a very good rabbit. She died a few years ago — she got sick and ultimately the vet didn’t think she could be saved. But before that, for about seven years, she was my rabbit and I loved her very much. She was a part of our family, and she would often come over and lick my eyes — I half suspect she knew there was something wrong with them before anyone else did and was trying to help.

I miss her every day. She was small, and gray, and brave. She would charge the cats and grind her teeth, and one time, she did a backflip in order to drop kick one of the cats who was trying to get into her enclosure. I can’t really tell you just how much her loss changed me, how much I miss her binkies and her loafing next to me while I played Mass Effect or Dragon Age. She made my life better and I know there’s a hole in me now where I will never see her again. Lodur once drew me a picture of a rabbit wearing Warrior Tier 2, and I know that was Grimalkin in her heart of hearts, the Warrior Bunny.

Five years, little girl. We haven’t forgotten you. We never will. I hope to see you again, doing binkies wherever good little rabbits go. Every time my eyes act up I remember.

Q4Q: If Blizzard does announce a WoW expansion, what’t the soonest it could be live…. next summer?

It could go live at BlizzCon, if it was finished. A lot depends on when patch 8.3 drops — it doesn’t go live until say January of next year, I wouldn’t expect patch 9.0 until October at the earliest and I wouldn’t expect the next expansion before next Christmas.

RED WANTS TO KNOW JUST HOW VAIN I AM

I use the Zulian Tiger for this reason. I also use Mimiron’s Head although I don’t think it looks dated. But it was fairly special to me.

GLOWING METEOR CARROT IS HOW CAPTAIN CARROT GOT HIS POWERS

Out of all of the faction leaders, which one would you say is the happiest? Probably Gallywix right?

Obviously it’s Tyrande, since she got her revenge and all.

Everyone turns and stares at Blizzard.

QftQ:
I think the possible future of the faction divide is often discussed as an all or nothing proposition. In the sense that either we maintain the status quo or the factions go away entirely.

But I think there may be a middle ground here. Players will be able to communicate, group, and guild cross-faction. However they would still be members of the Alliance or Horde, and that would still impact what quests or cities they have access to. War Mode could still be a thing, but would now have a mercenary mode. The upcoming party sync feature could then resolve questions like “what version of the Battle of Dazar’alor do cross-faction groups get”.

Falrinn, your suggestion is reasonable and you articulated it well and I see no way on thsi green Earth that it will happen. It would be great — I’d personally love it if they just made it so we could group with whoever we wanted. I wish this is what they would do, and to be honest, I have no idea what they are going to do.

But when I personally talk about the faction divide and cross-faction play, I make a significant effort to manage my expectations. I don’t say that I think they’ll do anything that makes this kind of sense because I don’t want to be disappointed and I don’t want any of you to read what I wrote, think Awesome, they’re going to get rid of factions and then come to me in a year saying I got excited because of what you wrote and then it didn’t happen. So for myself, I’m assuming that Status Quo will Rule at the end of this expansion, until I see differently.

FUZZYBUNNY MADE A BOLD STATEMENT

Tomorrow I shall be the center of the universe.

Well, I hope you have a good time. When Lotharfox asked me to feature bunnies on the Queue, I of course thought of my Grimalkin. I hope your day is as good a day as she was a rabbit. Of course that’s not really possible, because she was the best rabbit ever. But I still hope it happens. May this day give you many reasons to binky.

OMEDON WANTS TO TALK ABOUT BLIZZCON

Q4tQ: If the “8.3 and 9.0” info dump at Blizzcon confirms faction mechanical change (like “dwarves and trolls in the same dungeon groups” kinda change) … what does the audience sound like? Cheers or boos?

We all have our own opinion but let’s send our objective feelers out into what we’ve observed. Is this a wise card to flip over in front of a live audience? Forget Garrosh 2.0, is “Diablo Immortal 2.0” a legit fear here?

There is literally nothing Blizzard can possibly do that will please everyone. I believe they’re at peace with this, and they try and do what they think will be best for the game as a whole and the most people possible. I absolutely think a vocal part of the player base will be utterly furious if Blizzard outright abolishes the faction conflict, and I think at least a sizable minority would be upset even by Falrinn’s suggestion.

I mean, WoW Classic is currently super popular and it’s even more faction restrictive than live is. So who knows? Perhaps the majority of players want that there.

GOLD RUN WANTS TO KNOW SOMETHING ABOUT LIFE AFTER WOW CLASSIC

Q4TQ: If Blizzard’s classic plans end up terminating – whether with just classic, or down the line with WotLK – what would you think of being able to transfer our characters to live to continue that journey, along with whatever skills, rep, and achievements we picked in our time in classic?

I would hate that idea with the fury and intensity of a thousand suns.

ARTHONOS BRAGS ABOUT HAVING FRIENDS

I always find it amusing when I find and recommend something new to my friends, have them ignore my suggestion, and then several months later they come up to me raving about said thing proclaiming they discovered it and how great it is.

Recommend my books to them. That way, they’ll end up liking them months from now, which is better than them not knowing the books exist.

Sorry, Pidia, I tried to answer the questions you had for Liz, even though I’m not Liz, but the Queue ate them and I had to delete your entire question just to get it to show up again. Hopefully you’ll remember to ask Liz when she gets back.

Have a great bunny day, everyone. Remember, bunnies really don’t like being touched by people they don’t know, and its best to let the rabbits come to you instead of going to them. You’ll know a bunny likes you when it’s comfortable enough to binky around you.

I’ll be here remembering my little Grim girl stealing the carrot out of my hand and running away with it like I was going to try and take it back. She always did that. Never stopped. She was such a good rabbit.

Blizzard Watch is made possible by people like you.
Please consider supporting our Patreon!
Filed Under: Grimalkin
Advertisement