Pirate Day walks the plank into World of Warcraft today, but only for 24 hours! 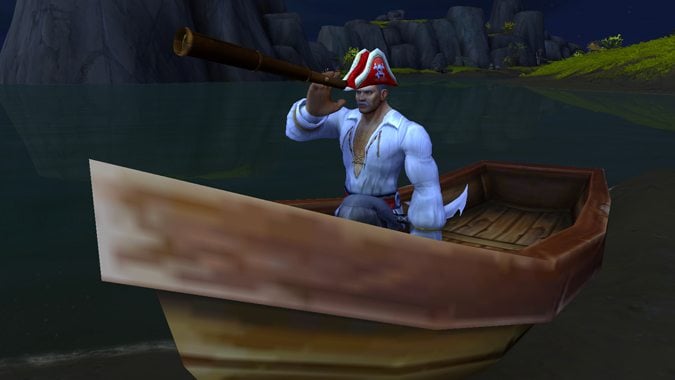 Yaar, as inexorable as the tides, as surprising as a fully armed galleon blasting a broadside into yer flanks, it’s again September 19, also known by you landlubbin’ bootlicks as Talk like a Pirate Day. Now, if you want how actual pirates spoke, there was probably a lot more swearing in there.

Well, also, the word Pirate basically refers to anyone who, you know, commits acts of piracy and not just a specific shallow caricature based around movies set during the Age of Exploration, so we could have Vikings or even ancient pirates of the Mediterranean — both ancient Greece and Rome, for example, had pirates — Julius Caesar was kidnapped as a young man by pirates, and not only was he so incensed at how little they were ransoming him for that he made them ask for a lot more money, but after he got free he hunted down the pirates and killed them. So don’t be a pirate, kids.

Anyway! World of Warcraft has once again decided to baffle me with this holiday and not mention Julius Caesar in any way. They do, however, have a sale — the Cracker battle pet and Pirate Ship mount are both now on sale on the Battle.net shop, if that’s something you’re interested in.

Looking over the Wowhead post, it doesn’t look like Blizzard added anything new to the holiday for this year.  You can still go to Booty Bay and talk to Dread Captain DeMeza and you can buy the Big Bag of Booty from our chatty pirate. You can go kill a giant shark named Ol’Eary which is weird, because sharks don’t have ears, and he might drop a Slightly-Chewed Insult Book, allowing you the power to insult people in a more piratical manner. But sadly, no new pirate themes transmog items or anything like that this year. Maybe next year.

International Talk Like A Pirate Day is today, September 19. And then it ends. So if you want a chewed up book or to be turned into a pirate, head to Booty Bay as soon as you can, because after today you’ll have to wait an entire year for your chance to say yaar a lot more than usual.