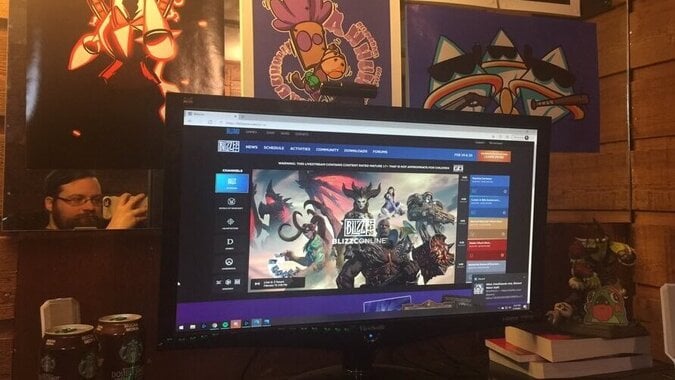 Whew, what a day!

We’re halfway through BlizzConline right now, and boy are my fingers tired! Three cheers to all of the other writers, we made some good words happen yesterday! Seventeen cheers for our editors though — Liz, Dan, Anna, and Mitch have done an absolutely stellar job of wrangling all of us crazy cats into formation.

Since I’m not even supposed to be here today, let’s jump right into — The Queue.

Q4tQ: why are dwarves just the WORST in WoW?

They smell. The Alliance in general smell, but somehow Dwarves manage to smell worse than even the persistent wet dog smell that Worgen have. Plus, I’ve heard they all wear fake beards.

ON KALCHEUS FIGHTS FOR THE RIGHT, YES, BUT WHO’S TO SAY?

Man, working BlizzCon is tough … and this was a light year, panelwise. I’m not looking forward to the return of the live event.

I also missed so much. I watched the first half of the Opening Ceremony, took a lot of screenshots during the TBC deep dive, and then only had one eye on the Shadowlands update while I put the gallery together. Time to watch a ton of videos.

Oh Kalcheus, I uh didn’t see you there. Listen, don’t read the above answer, it’s uh, not for you. Congrats on your first Queue though! They’re always special. Your first Queue and your first (working) BlizzCon on the same day! What are the odds!

This was my third and they already feel way easier to handle. We show up and run around like we’re chickens with their heads cut off, and then it’s over. Somehow in the intervening time, a bunch of words get written. Science still isn’t sure how that happens, but it does.

Who knows what the world will look like in 9 months, maybe they’ll run another BlizzCon and you’ll get to work on your second one!

Not so much a question, but I just wanted to say that I loved this as a rallying cry for the Venthyr. It totally fits the bored aristocrat nature of the Venthyr. My Bear is definitely in the right Covenant.

AMBULANCE ROBOTS FOR WHOM THE BELL TOLLS

I adore this tree mount even more now that I’ve seen the animations. It’s going on so many of my characters’ bars, I just can’t handle it.

The Wandering Ancient is gorgeous. They clearly put a bunch of work into it and it shows. I especially love the touch of it changing with the seasons. The Blossoming Ancient store pet did the same thing and it’s such a fun little bit of flair.

I still say that the Jellycat mount was the right choice though. As good as the Tree looks, I’m just imagining all of the doors that it won’t fit through.

Q4tQ Does Year of the Gryphon in Hearthstone guarantee we’ll get a Wildhammer expansion?

Maybe an expansion built around aerial combat between the Horde and Alliance. Which would heavily favor Dwarven Gryphon riders and Gnomish Flying Machines vs. Orc Windriders and Troll Bat riders. I’m not sure how the whole Hearthstone stable of classes will fit in, but I guess they’ve already done a Dragon expansion so how hard can it be?

The Hearthstone designers are fantastic at what they do, and they always bring the thunder.

Q4tQ: with the Rogue revealed, what’s your bet for the next Diablo IV class?

All the Diablo games so far have had someone running around in heavy armor, and Diablo IV has no “holy warrior” type yet, so my bet is something like the crusader or paladin. Monk is also a possibility, but those two seem most likely.

Templar makes more sense to me than a Monk does. But I hope that they go with Crusader over Templar. I really liked their design in Diablo three, they just feel grungier than the other wielders of the holy side of things. Which feels more like the vibe they’re going for in Diablo 4.

I’m sad that they haven’t really brought any of the non-Barbarian classes back from Diablo 3. I get that they only have a limited stable to design for, especially with how intricate each of the classes has been. But I still am going to miss my Monk and Witch Doctors. They were tons of fun and I’m going to miss throwing miscellaneous vermin at my enemies, before summoning a Pirahnado beneath their feet — or summoning a giant Divine Bell that I punch to destroy demons with holy reveberations.

TAKE A LOOK TO THE LEFTY JUST BEFORE YOU DIE

How many items are in your WoW screenshots folder? (1,754 for me)

So many. I’ve also got three or four different screenshot folders on the go. One from an old version of Warcraft left over when I uninstalled and reinstalled, one from each of the betas I’ve been in while using this computer, a PTR folder, some BlizzCon folders. They’re so spread out, and I really should consolidate — but that’s a problem for future Cory to deal with.

Today’s whoever (me?) Earworm™: For Whom the Bell Tolls

It’s almost time for day two of BlizzConline, have fun watching and reading along with us everyone! I don’t know if there’ll be another Queue on Sunday, or if the next one will be me again on Monday — either way, keep leaving lots of questions!