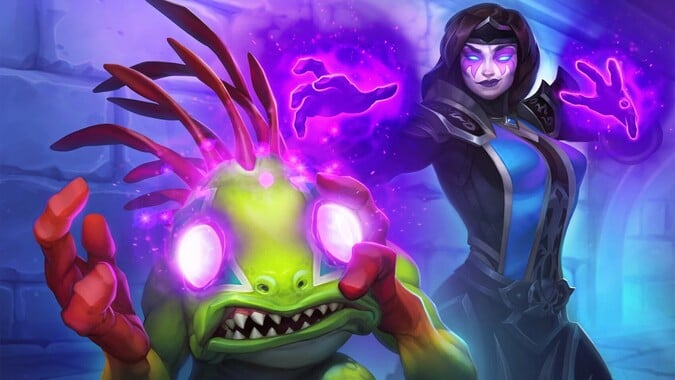 Anna was right, I didn’t even have to click the link to get it stuck in my head.

While I try desperately to get it out, it’s time for — the Queue.

QftQ: if you could pick one non-combat pet to come live with you which one would it be?

Baa’l probably, sure he may destroy the world, but look into all of those eyes and tell me that he isn’t just the cutest demonic goat around.

I KNEW I WOULDN’T FORGET MOVEWOW

Q4tQ: What are the things you like to do to prepare for an expansion release?

That’s a pretty close list to what I do. I will be absolutely ruthless when it comes to my bags and bank when I’m moving into a new expansion. Finally a chance to get rid of all of those things that I might’ve been hanging on to “just in case.”

Trinkets are usually the biggest offender there; “sure I haven’t really swapped my trinkets for the entire raid tier, but you never know I might find the niche where that other one might become useful…” are things that I’ve definitely thought multiple times.

Food-wise, I’ll make a giant pot of pasta so that I have nice tasty leftovers for the next few days. But I’m not above a good(bad) microwave burrito either.

SO I WENT AND LET ELAINE DE SHALOTT BLOW MY MIND

2BE (2 Boats Enter) Seamoth vs SeaTruck

Alternately:
Which is cuter Highland Calves or Alpaca Cria?

I’ve only looked at pictures of the Seamoth and SeaTruck, but I like how the SeaTruck can have additional modules added on to make it longer. Also, moths are usually fluffy so I imagine they don’t perform as well when they get waterlogged.

It’s the Highland calves, by a country mile. Baby alpaca are pretty cute — but not as cute as those fluffy cows.

It’s looking like a mostly complete patch on the PTR. There are a few things left that haven’t gotten highlighted in the builds — like the Mythic+ Affix and scoring system, and the raid gems. Beyond that Korthia is populated pretty well with quests, and the raid has been put through a bunch of its paces. I’d expect a release candidate by no later than the end of June. Barring any unforeseen major explosions in the Maw that is.

At least that’s what I hope — anything to get me away from having to do Blood Council progression.

AIN’T THAT MR. MUSEDMOOSE ON THE RADIO, STEREO

What’s your prediction for how fast BCC raid bosses get taken down?

Are they not down already? It’s been a few hours since the Dark Portal opened — has someone cleared Karazhan yet?

I think that we’ve already seen that Classic raids are pushovers for the kinds of people who will tackle them asap. So even the most complicated fights like Kael’thas and Illidan are probably a four-hour kind of affair. Sunwell might prove more of a challenge, just due to how hard pre-nerf M’uru and Kil’jaeden were, but we’ll probably still see them fall quickly.

9.2 definitely, but I really hope we get a 9.3. It might be coming up on longer odds of that happening though. Four big raids in an expansion really feels like the best possible amount to me. This is me being greedy because I love to raid, but it’s been that way for a while. Even Warlords of Draenor had four raids, although Highmaul was a little smaller and considered part of the same tier as Blackrock Foundry.

Warlords was the last time that they abbreviated an expansion (that we know about) and I don’t think we’re in the same boat here. Even with any delays from the pandemic, I hope that we still get the full Shadowlands experience because it deserves its chance to tell the full story that it meant to tell. More than anything I still hope that we get a chance to see a fifth Covenant and full new area (two would be even better) in the Shadowlands.

Q4TQ: Who is the better guest on the BlizzardWatch Podcast: you or Red?

Red did great! He certainly would be the better guest to talk about Hearthstone on the podcast. Full marks there. But he wasn’t me, so I gotta go with me as the better podcast guest.

It was a close race, but in the end, I was able to make a generous donation to my stomach and that may have swayed the judge’s favor.

Happy Pride everyone! Leave Mitch lots of questions for tomorrow, and have a great weekend!

Blizzard Watch is made possible by people like you.
Please consider supporting our Patreon!
Filed Under: This Is All Your Fault Mitch
Advertisement