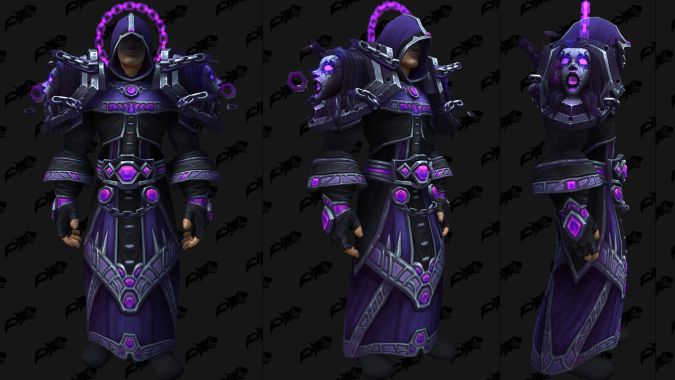 First of all, happy Thursday and I hope everyone is having a great week so far! Second, thank to everyone who tagged or thought of me as soon as the above Tier lookalike was datamined. Y’all know me so well 💜

With that in mind, I think it’s a good time for us to have a Queue.

RED STARTS US OFF WITH THE OBLIGATORY:

I love them, and the face on the shoulders reminds me of Sylvanas with this color scheme. And if they happen to be related to a new incarnation of the Mage Tower, I’ll be even happier. I admit, I’m that curmudgeon who doesn’t want the Legion Artifact appearances to return*, so this is a great compromise for those who want the challenge back and those who want the old rewards to remain exclusive.

I will note, I’d still love to see the black/silver Tier 6 look that Soulbinder Nyami is using.

*I may not want them to return, but I also won’t fault anyone who does want them to return. We all play how we play, and if Blizzard said they’re bringing those looks back tomorrow, I wouldn’t rally against it. (I might be silently grumpy though.)

ELAINE DE SHALOTT HAS A CHOICE TO MAKE:

Hmm. Pixies, Dorfs and Snek people. Who else should I visit today?

I have enough allowances for one of the following:

Ummm… either of the fishy folk. No particular reason why, but they get my vote.

i love the idea that NPCs call us “champion” because they momentarily had a brain fart and forgot our name. can we do that to them? what do we call them? “champion” is taken, so how about “leader” or “questgiver”?

I’ll be honest, I don’t envy the writers who need to come up with ways for NPCs to agnostically address players of all types. I mean, yeah, it’s one word. But wouldn’t it be cool if NPCs could be more dynamic in how they address us?

For now, though, I’ll stick with your headcanon because it’s funny.

I was wandering around on the shop floor today and a Q4tQ popped into my head.

What’s your favorite Weird Al song? Is it a parody or an original work? For me, I really love “The Check’s in the Mail.” AFAIK it’s not a parody, but I can’t be bothered to look it up and find out. For parodies, I’d call it a tie between Jurassic Park and Amish Paradise.

I don’t actually know a ton of Weird Al songs, but there are a couple that really stick out to me:

I do wish I knew more of his work, but I also don’t think I’ve ever disliked a song of his when I’ve heard it.

SPENCER MORGAN GETS DEEP ABOUT MONSTERS AND HUMANITY:

Q4tMitch: Is it possible that my cynical view of broader humanity is the reason I root for the monsters in movies? Either the monster wins, and humanity had it’s chance anyway. Or, the monster loses, but the devastation of major population centers has eased the burden of the human population on planet Earth.

Is it possible? Absolutely! And, in both the past and present, horror has been used to express larger concerns about society. Granted, rooting for a monster in a film and a monster in real life are two very different things. But I definitely understand the urge to want a fresh start for humanity, and monster/horror movies sometimes offer that in ways real life doesn’t.

BRUIN’S QUESTION HAS A DEFINITIVE ANSWER:

Well, I have good news and bad news: The good news is that we know for certain we’re getting new travel forms — in patch 9.1.5, in fact! The bad news is that there’s no sign of new Shaman Ghost Wolf forms, which is a shame. We’re in the land of the dead and it has “ghost” in the name. But I get that there are only so many devs and only so much time to make things.

Does anyone else find hunters that don’t name pets odd? I always find it weird how rare it is to see a hunter with a named pet.

For me, I think it would depend on if the Hunter were a main or alt. I’m certainly prone to not naming pets on my alt Hunter(s), but it’s not because I don’t want to. I usually just don’t have a name in mind at the time and then get distracted by other things before I can come up with one.

If I could name my Priest’s Shadowfiend, though, I totally would, because I have a stronger connection to that character and that ability.

That’s the Mitch Queue for this week! May your days be lovely and your nights full of whispers.