How to identify items in Diablo 2 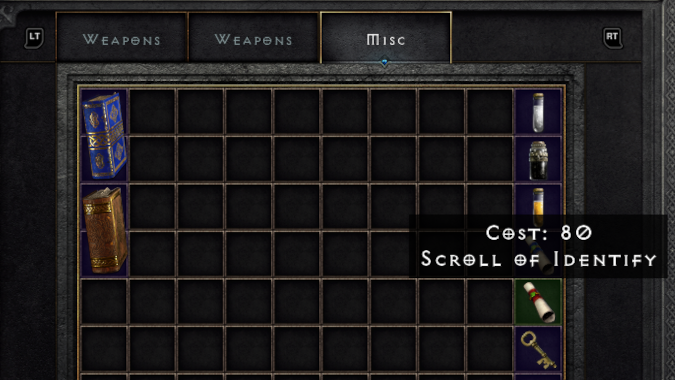 First off, if you’re coming to Diablo 2: Resurrected from Diablo 3, you may be a little confused about the Identify mechanic. Unlike it’s sequel, D2R doesn’t let you simply identify any item by clicking on it. Instead, the Scroll of Identify is used, an item you can usually purchase in town and which also sometimes drops from monsters as you kill them. The scroll is a one-use item — clicking on the scroll, you can use it to identify a singular item. Doing so consumes the scroll, so you only get one use per one scroll to identify one item.

However, you can pick up a Tome of Identify that will hold up to 20 scrolls, which is a good investment as it means the scrolls are using up only one inventory slot instead of 20 of them. That’s right, the scrolls don’t stack, but to be fair almost nothing stacks in Diablo 2 so it’s not like scrolls were going to. But buying a Tome of Identify means you can place all your current Scrolls of Identify in it, and better still, once you have a Tome in your inventory it will automatically add any Scrolls of Identify you purchase or pick up in the world to it until it’s full.

In Act 1, you can purchase Scrolls of Identify as well as Tomes of Identify from Akara, the leader of the camp and High Priestess of the Sisterhood of the Sightless Eye who also gives you quests. But keep in mind, it costs 80 gold per scroll and 200 gold for a Tome to put them in, and there is a way to save yourself some gold here — namely by doing a quest to find and rescue Deckard Cain.

This quest, the Search for Cain, is only available to you after you cleanse the Sister’s Burial Ground. Kill Blood Raven and return to the camp, where Akara will offer you this quest. Absolutely do not finish Act 1 without completing this quest, because if you do, Deckard Cain will be found by the Sisterhood of the Sightless Eye instead of by you personally, and then Cain will charge 100g to identify magical items for you. That’s even more expensive than the Scrolls! But if you make sure to complete the quest and free Cain personally, you can return to Cain in every Act, and he’ll identify your items for free out of gratitude.

It’s still worth keeping a Tome of Identify on you for when you’re out in the world and want to see if an item is worth immediately equipping, especially when bag space is tight. But being able to just have Cain identify all of your items will save you a lot of gold in the long run, so do not skip The Search for Cain if you know what’s good for you.

So that’s how to identify magical items in Diablo 2: Resurrected. Buy scrolls until you can free Cain, then use him to do it because it’s much cheaper.

Blizzard Watch is made possible by people like you.
Please consider supporting our Patreon!
Filed Under: Deckard Cain, Scroll Of Identify, Tome Of Identify
Advertisement