The Queue: Just under a week to go! 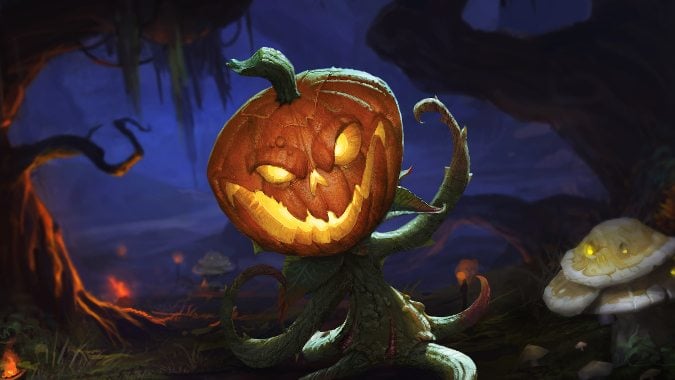 Can you believe that it’s almost Halloween? By this time next week, all of the candy will be on sale and Jack-o-lanterns will be extinguished. We better make the most of it, before that other holiday rears its head and you can’t go into a store without hearing carols.

While I go put up some spooky decorations, it’s time for — The Queue.

YOU HEAR MAGECOOKIES HOWLING AROUND YOUR KITCHEN DOOR

Does anyone still do the Headless Horseman because it is a fun fight? I’ve got everything from him but still like to do it a few times on my main for old times sake.

I’ll do him once a year, just to pay my respects. I’ve had the mount he drops for many years now, but I still want to make sure to go in there and see him in all of his Headless glory.

It is also a really neat fight, although the group I wound up with this year was amazingly overgeared so it only took about 15 seconds to get through. Maybe next year he’ll be tuned a bit higher so that his Pumpkin Soldiers have a chance to bring victory at last to that fallen knight.

YOU BETTER NOT LET RETPALLYJIL IN

Q4tQ: There was a lot of talk about a time skip before the expansion, but what if –

The portals out of the Shadowlands were 100% gameplay and not capital-L Lore; onlookers saw all the NPCs and our characters jump into this black cloud of death and fall over, deader than disco.

We come back to find out everyone’s pretty much written us off, threw our probably dead but maybe potentially alive carcasses into a fancy tomb, and stuck statues up in appropriate places.

I don’t have anything to add here. That sounds like it’d be a pretty funny way to come back to the land of the living. I hope that they made a nice statue of me.

Our characters just falling over and people freaking out however does remind me of this short video about time travel.

Where do you sit in terms of gameplay vs. story? Asking because I recently tried to play a game I was interested in because of its story, but I could tell after about an hour and a half that the gameplay was going to cause me no end of frustration, so I stopped. >_<

I have to really really really want to experience a story if I’m not digging the gameplay. I can’t think of anything that I struggled through that I wasn’t feeling, so I guess I’ve never run into a situation like that yet. I’ve just recently gotten the Xbox Game Pass, and I’ve really liked having the ability to get my hands on a game that looks interesting and then find out that yeah, it’s not for me.

Games can be such a big investment compared to other media, it’s not like being checked out and getting through a filler episode or two of a tv show. If the endgame is where the game really starts to get good, and it takes 20+ hours to get there — I hope you’re really enjoying yourselves, but there’s almost no way I’ll join you.

Counter-question: how do you feel about watching Let’s Plays? Feels like that could solve a bunch of your issues.

I don’t generally watch other people play narrative games for long stretches. If they’re shorter indie things, maybe. Like I used to tune into Anna’s streams back when she was still able to set time aside to do those. Thanks to that I’ve seen all of What Remains of Edith Finch, and a bunch of Annapurna interactive games. But that’s because I really liked watching Anna stream, not that I was experiencing any overwhelming desire to watch someone else play those.

I’ll watch friends stream Warcraft, or things like Phasmophobia, and Heroes of the Storm all day — but when there’s a story involved, they don’t make the decisions I would make and that drives me batty.

As for your other question, coriander is a fine spice. I don’t use it very much, but I don’t have any strong feelings about it, unlike cilantro. Which I don’t have the gene that makes it taste like soap, but I feel that cilantro just overpowers whatever its in and winds up being the only thing I can taste.

If you had to pick a finger to lose which one would it be?

Left pinky finger. My typing would suffer and I’d have to get one of those extra-grippy things for the back of my phone so I could hold it properly, but I don’t think my day-to-day would take that much of a hit.

You’re in a pumpkin patch – Which color of pumpkin do you choose and if you plan to carve it what would you carve?

I want the standard orange pumpkin, and I’m a sucker for the classic pumpkin face. Mainly because actually carving complicated things is super hard.

How was the lobster and shrimp risotto?

Heckin’ delicious! The picture I put up on Twitter was leftovers from my parents taking me out for a birthday dinner. I had a nice bottle of Argentinian wine, some delicious calamari, and far too much risotto to eat in one sitting.

Will 9.1.5 noticeably change your day to day or week to week in-game behaviour or will it just make some things faster?

I don’t think it will. The quality of life changes will be nice, but I already wasn’t swapping my characters around Covenants all willy nilly. I’ve firmly been in the Venthyr camp from day one, and aside from a quick tour to pick up mounts and transmogs from the other Covenants, I plan on being a Venthyr when I leave the Shadowlands.

I am really looking forward to being done with school and having some time to go hard on Legion timewalking keys and the Mage Tower though.

Give me a pep talk. I’m 3/6 for Flawless Torghast runs, but I’m failing on the other three. My gear is 227, so not terrible, and I’m using an addon to help me track duplicate powers. I’m just not getting through the floors fast enough.

You can do it! The hard part is getting the first one! Now you’ve got proof of concept, and you know for sure that it’s possible. All you’re looking for now is those perfect runs for the other three wings. The runs where you get your best powers, the density is perfect, and just the right song came on the jukebox as you started.

Think of it like raiding, sure you may wipe over and over again to a boss like Mythic Ner’zhul and feel like you spent your night hitting the same brick wall time after time — but you’ve already beaten three other Mythic Ner’zhuls who were wearing different hats! Plus this one said your transmog was wack! Are you going to let him get away with that?

Have a wonderfully spooky week everyone! Don’t get lost in any deep dark woods before I can see you again…