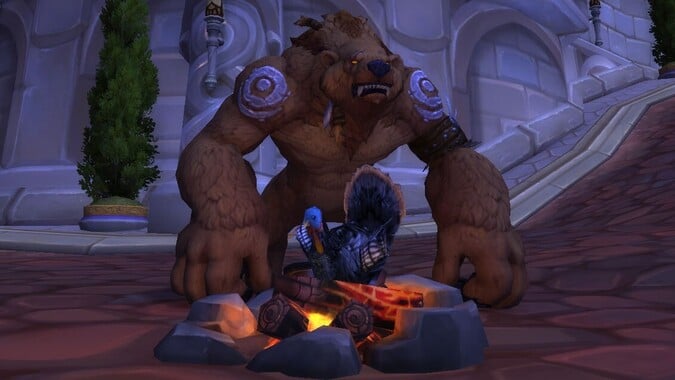 Hey, it’s Canadian Thanksgiving! So if you’re Canadian — Happy Thanksgiving! If you’re not, just know that I’m eating and drinking very well this weekend and you should be jealous.

While I get another glass of wine, it’s time for — The Queue.

WITH JUST A LOOK, XERIANNE SHOOK

Now that we’re almost out of Shadowlands what’s your favorite storyline from each zone/covenant?

Revendreth — All of it. I loved working as a Vampire tax collector, and then as a rebel freedom fighter working against the evil Sire Denathrius. Theotar’s tea parties in the Ember Court are also a big stand out.

Bastion — Working to bring the Forsworn back into the fold and help the rest of the Kyrian to accept that not everything is black and white.

Maldraxxus — I love a good “curse your sudden, yet inevitable, betrayal. So getting to be front row for that was a treat.

AND HEAVENS BOWED BEFORE RETPALLYJIL

Gnomish Paladins who use focused Light (aka lasers) for their spells. Good idea or great idea?

I have always enjoyed the Holy Prism spell for Paladins. So extending that into the rest of the spells and making laser Paladins sounds like a great idea. Of course, then there’d have to be a second Warcraft soundtrack that takes over the main one that’s entirely 80s-style synths to go along with something so rad as Laserdins.

Why stop there, why not just slap an 80s filter on all of the classes and get us all tricked out in neon armor that would make the Burning Crusade clown-suits jealous. I want neon accents and clashing geometry that can be seen from space!

What’s your crazy but theoretically possible prediction for where we’ll end up in patch 10.3? My guess is the moon.

I want us to be shrunk down to fight off an infection inside of a dragon. Think of being on Maldraxxus, only way goopier.

Work alongside factions of healers to defeat plague elementals and dragon blood cells who see us as the invaders that need to be excised from the body. The raid would be an all-out assault on the virus forces around the heart and lungs and brain of the dragon.

All of the weapons and armor that you got from it could be made from body parts inside of the dragon, lots of bone, goopy, and fleshy bits.

THE STARS THAT PIERCE THE SKY SJHAWK LEFT THEM ALL BEHIND

The WoW devs like to iterate on systems from expansion to expansion, as well as leave things by the wayside.

Well, the left-behind thing is definitely Garrisons and the concept of player housing. I know that it’s gotten some iteration with Class Halls and Covenant Halls, but I miss being in control of the area. It was nice to be able to set up my holiday decorations and choose which buffs and powers I wanted to take advantage of while questing.

As for things that should be put aside, that’s a tougher one. I love Mythic keystones and always having something to do to build character power. On the other hand, it has made raiding less lucrative in getting new shiny gear. It’s a problem with no easy solution, and I wish that I could figure it out.

Warcraft developers did recently share a post talking about the future of Mythic+ and how they’re making the rewards scale up to keystone level 20 now instead of capping at 15. Which has me feeling a little leery, because I’ve only completed a handful of level 20s in my Warcraft career, and now in order to get the best loot possible I’ll need to be making that more of a focus in Dragonflight.

As we are getting a huge number of class + race combinations added in DF what combo are you most looking forward too?

There need to be more wacky combos to really get me to be super excited. I wanna see Vulpera Demon Hunters!

Orc Priests are nice too I guess.

DREAMS OF HIS CRASH WON’T PASS, OH, HOW THEY ALL ADORED ENO

What should Blizzard prioritize in Dragonflight for providing fun to all its players?

As always I think it’s just a matter of listening to community feedback and giving players what they want. As long as they can implement that in the proper framework to ensure that it’s not a matter of players getting too much cake and having a tummy ache.

I’m not a fan of the “fun detected” meme since usually changes are put in place to either save players from themselves and grinding things that shouldn’t be marathoned — or exploits to stop one class or spec from being able to do silly things that wind up with lots of material or gold or advantages.

Note I say usually, I’m not going to stand up here and say that all changes are defendable, because there have been a few that have felt like they could’ve been left alone, but I’m also not in charge of balancing a live service game for millions of players.

I’m not actually sure. I’ve always assumed it’s because of the earlier harvest to beat the frost. Although there’s no frost here to beat right now. We’ve had a very nice October so far.

I’m glad that we do have an early one, it gives some more breathing room between Halloween and Christmas to not have to worry about holidays and planning things and such.

Have a great holiday Monday! Make sure that you leave Anna with lots of fun questions to answer tomorrow!