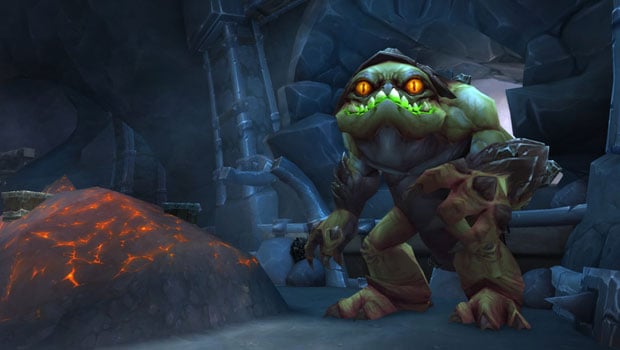 Lead Game Designer Ion Hazzikostas took to the forums to better explain Blizzard’s philosophy on Blackrock Foundry’s difficulty tuning. If you’ve been raiding it this week, you probably noticed it’s a little harder to progress than Highmaul was at the beginning. According to Watcher, Blackrock Foundry is not meant to make Highmaul immediately obsolete. They still expect you to fully progress through Highmaul before you can realistically tackle Blackrock Foundry. Normal mode Highmaul had an expectation of players coming in with heroic dungeon gear, but Blackrock Foundry is tuned for players in full raid gear (including the first few “easy” bosses). Later bosses are tuned with even more player item level in mind.

Blackrock Foundry is composed of three wings of three bosses followed by Blackhand, but you shouldn’t expect your progression to occur one wing at a time. The final bosses of each wing are intended to be more difficult than the preceding ones. So after you kill Gruul and Oregorger, you probably don’t want to hit the Blast Furnace next. They do agree that some bosses (particularly Blackhand) may still need some adjustments and those will continue to come in the form of hotfixes. The main takeaway from all this is Blackrock Foundry is meant to be harder. If your group is hitting a wall, maybe you need to revisit Highmaul for a few raid nights.

At this point, the terms “overtuned” and “undertuned” are mainstays on the forums in the days and weeks following the release of each new raid zone. My best definition for “overtuned” is “harder than it should be”; inversely, “undertuned” means “easier than it should be.” But of course everyone has a different idea of should — of what the tuning target is for a given boss. Some are voicing their own opinion as players, while others are guessing at the developers’ intent based on our past history and comments. Unsurprisingly, this lack of context and common ground all too often leads to people talking past each other, accusations of trolling, and other fun forum interactions. To help ground the conversation, I’d like to share a few thoughts and goals about how we approach the difficulty and complexity of our raid bosses.

Tuning in general is a very interesting topic, and one that sees a huge amount of discussion around the office, whether in formal planning meetings early in the design process, or yesterday morning when a coworker stopped by our office to offer a stern glare and some choice words about Oregorger.

As background, Blackrock Foundry itself is a bit of an experiment with a significant split-release initial raid tier. In Cataclysm, the initial 4.0 patch had three raid zones that opened immediately, with a total of 13 bosses (14 on Heroic), and the amount of content felt overwhelming to many. In response, in Mists we partitioned 16 bosses into two separate releases, with Mogu’shan Vaults opening the second week of the expansion, and Heart of Fear and Terrace following a month later. While this helped somewhat, many players still felt rushed, with new bosses unlocking far faster than they could keep up.

And so for Warlords, we added a more significant two-month gap between Highmaul and Foundry, allowing a significant portion of the playerbase to make real headway in Highmaul before we unveiled the remainder of the initial raid content. But that larger gap, while offering what we consider improved pacing, also made Foundry feel like a whole separate tier, which changed expectations slightly. If you quickly cleared half of Normal Highmaul the week of release, would you be able to clear half of Foundry just as quickly? If you had finished working your way through Normal Highmaul and had moved on to Heroic Highmaul when Foundry opened, would Normal Foundry be comparatively easy since you’ve now been raiding Heroic content?

In several ways, we intended Foundry to complement, rather than supplant, Highmaul. If we had wanted Foundry to be a fresh start and a clean slate, we would have had it completely obsolete all Highmaul gear, the way Normal Jin’rokh dropped items that were 13 item levels better than loot from Heroic Sha of Fear. But Highmaul remains relevant, and Foundry exists as a direct continuation of that progression. While Normal Highmaul was designed with the expectation that players would arrive with dungeon items, Normal Foundry expects players who are mostly Highmaul geared. Thus the numerical targets, in terms of healing and damage throughput, for even an early boss like Gruul or Beastlord Darmac, are comparable to what Ko’ragh demands in Highmaul. So just because you now find Kargath to be simple, does not mean that Oregorger will be equally easy prey. But players who had success in Highmaul should all be able to continue into Foundry, stake a foothold there, and continue to progress in their difficulty of choice. And those who are still working their way through Highmaul will continue to find invaluable items there, which will help them eventually delve deeper into the Foundry.

As for the structure of the zone, Foundry is a winged instance, in the style of Naxxramas or Icecrown Citadel in the past, and we intend for bosses to become more challenging the deeper into a given wing you go, but for the different wings to be largely equal in overall difficulty. Groups who jumped right into the Blast Furnace encounter after downing Gruul and Oregorger likely found themselves in over their heads, but that doesn’t necessarily mean that the Furnace encounter is “overtuned” — rather, in essence, you were skipping from bosses 1-3 all the way to bosses 7-9. The early bosses of other wings will offer a more suitable challenge, and will offer valuable item upgrades to help prepare you for the end bosses of each wing, and of course for Blackhand himself.

Our expectations regarding item progression through a zone also may not be obvious, and may contribute to perceptions of “overtuned” encounters. We generally assume that our target audience for a given piece of content is starting out largely (but not entirely) geared with items from the prior difficulty and/or zone. So Normal Foundry was designed to feel appropriately challenging for a group that enters the zone with a fair amount of Normal Highmaul gear. Heroic Foundry expects some amount of either or both Heroic Highmaul or Normal Foundry items. But that’s just for the start of the zone. Guilds that are squarely in the target audience for a given difficulty aren’t the ones who blaze a trail to the end of a zone: they progress steadily and surely through it, downing a boss or two each week and accumulating a significant amount of loot along the way. Thus, the deeper into the zone you get, the higher the item level we imagine you are likely to have. This, too, often causes guilds to feel that some bosses are “overtuned.”

For example, imagine a guild that had fully cleared Heroic Highmaul and had 2 Mythic bosses down, coming straight into Heroic Foundry with an average item level of 672. This guild, being both skilled and somewhat overgeared (compared to the 665ish item level we might imagine for a typical guild entering Heroic Foundry), might steamroll through the first portions of Foundry. They’re getting some item level 680 upgrades along the way, but one partial clear’s worth of loot isn’t enough to drastically change their overall power. But then, before they know it, they’re face to face with wing bosses or even Blackhand, which were designed with the expectation that raids would have acquired a significant amount of ilvl 680 Foundry loot, perhaps with some tier set bonuses in play. And so those encounters might be unexpectedly challenging. But the seemingly sudden jump in difficulty isn’t due to a tuning error, but rather because this group of trailblazers cleared so quickly that they went from being overgeared for early bosses to actually undergeared for the later ones!

All of the above said, that doesn’t mean that we feel every boss in Foundry is perfectly tuned according to our goals. Blackhand is almost certainly a bit too demanding (though not drastically so – he’s supposed to be hard!) and will likely see some adjustments going into the new raid lockout next week. And we’re keeping a very close eye on raid-size scaling issues that may make certain fights excessively difficult with too few or too many players, and have adjusted a few such mechanics already. But in general, we’re satisfied with how things are shaping up so far.

Thanks for reading through all this, and feel free to return to the tuning debates. It wouldn’t be the Raids & Dungeons forum without them. But hopefully this shed some light on how we approach the topic on our end.

Blizzard Watch is made possible by people like you.
Please consider supporting our Patreon!
Filed Under: Blackrock-foundry, Raiding, Watcher
Advertisement