Locked and Loaded: Hunter Weak Auras to improve your gameplay 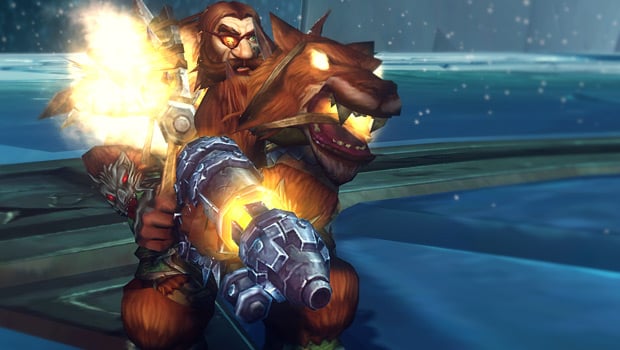 Welcome to Locked and Loaded, Blizzard Watch’s regular column for survival, marksmanship, and beast mastery hunters. This week, your host Adam Koebel (@BendakWoW) will be helping you make your hunter life a bit easier.

If I was only allowed to use one addon, Weak Auras 2 would be the one. It’s an incredibly powerful addon that will let you create alerts and track almost anything in the game. Today I’m going to share a bunch of hunter-specific Weak Auras with you that will improve your gameplay and increase awareness. If you aren’t currently using the addon, hopefully I will convince you to give it a shot. If you are using it, maybe you’ll find some helpful new Weak Auras in this post.

First things first, you need to download Weak Auras 2 and install it. Once it’s loaded in the game, open up the interface with the /weakauras command.

To use the custom Weak Auras which follow, you need to click “New” and then select the “Import” option. This will bring up a text box where you need to copy and paste the import code (yes, all of that gibberish). Make sure you copy the entire code (triple click to select all).

You will find your newly imported Weak Aura listed on the left column. By clicking on it you can preview what it looks like and customize its position and appearance on your screen. Simply drag it where you want it to display. Then check out color, font, and scaling options in the “Display” tab to customize its appearance if you desire.

Follow the same process for each weakaura you want to add. If you don’t want to keep them, they can be deleted by right clicking them from the list. If you want to temporarily disable one, or change when it displays (for example, only inside a raid instance), you can find those options in the “Load” tab. 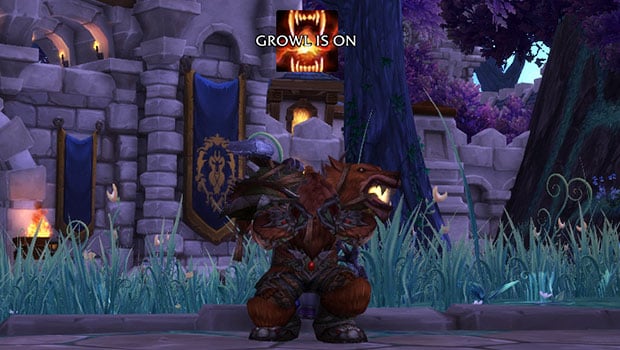 We’ve all done it…

Get the pet management import code

Let’s be honest, our pets can be prone to derping from time to time. They get stuck, they randomly decide to disable or enable autocasts (maybe that’s just me misclicking, but I’m still going to blame my pet), and they do other things that prevent them from clawing and biting your enemy. Sometimes we even make mistakes, like forgetting to turn off Growl inside a dungeon.

Don’t worry, I have the answer! This awesome group of Weak Auras includes the following:

Note: If you are using this on a hunter below level 100, you should use this version as these Weak Auras normally depend on level 100 talent selections to account for Lone Wolf. Once you ding 100, you can delete this whole group and import the original.

Get the Focus bar import code

I believe it’s important to have a secondary Focus bar that is more visible than the standard one on your unit frame. It should be placed near your action bars, or wherever you display your cooldowns, so both can be viewed at a glance. There are other addons which will give you a secondary Focus bar, but you can create one with this Weak Aura as well.

Move and re-size the bar to your taste. Reference it when you’re deciding what to cast. For example, let’s say Kill Command has 2 seconds left on its cooldown and you’re sitting at 40 Focus. Some hunters might blindly cast an Arcane Shot in this scenario simply because it’s the highest priority shot available, but that would be the wrong call. Use a Cobra Shot to fill in the time and ensure Kill Command can be used when it’s available. Having a Focus bar within view at all times helps you make these decisions.

This Weak Aura group was created by hunter Azortharion and advises you when to use your Focus Fire ability. In the past, Focus Fire was simply something used at 5 stacks of Frenzy and that was it. This is not the case anymore thanks to the Improved Focus Fire perk. The goal is to stack it with cooldowns like Bestial Wrath and Stampede whenever possible. These are the alerts it gives you:

This one may not be to everyone’s taste, but I like to know when Beast Cleave is active on my pet. I have the bar placed below my main action bars and out of the gameplay space, and I made it large so I can see it with my peripheral vision. You may want to adjust it.

Counts down to Bestial Wrath expiring. Place this somewhere that you can quickly reference. 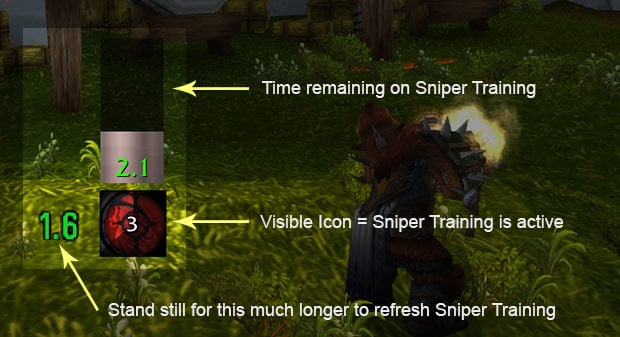 This is a handy Sniper Training tracker with a few functions. It will display a Sniper Training icon when the buff is active, and when you start moving it will show a vertical cast bar for when it will expire. There is another countdown timer that activates when you begin standing still, counting down to when Sniper Training will refresh. Original source.

Alerts you when your Trap Launcher is toggled off (happens when you change glyphs). Don’t use this if you actively toggle it on and off for some reason.

A simple expiring cast bar to let you know how much time is left on Steady Focus. Again, I have it fairly large so I can see it with my peripheral vision. You may want to resize it or change it into a horizontal bar.

A rather large icon to show you the time left on Deterrence, which is helpful for those times when you need to use it twice in a row. It doubles as a reminder to cancel Deterrence once you’re finished soaking a boss mechanic. You can do this with a macro: /cancelaura Deterrence

Aspect of the Pack import code

Alerts you when you have Aspect of the Pack turned on in combat. 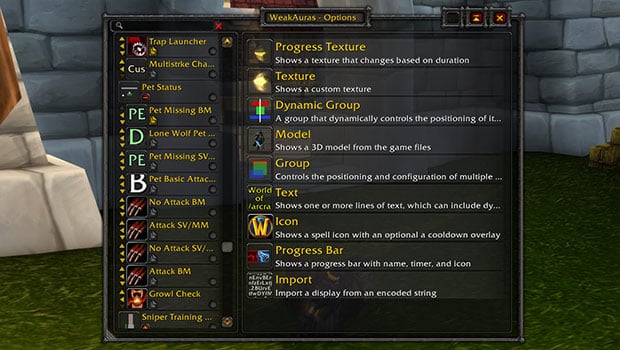 Weak Auras has a bit of a learning curve, but by viewing the settings of these existing ones you will learn how they work. It’s very simple to create your own Weak Auras to track other things. For example, let’s say you have an on-use trinket like the Lucky Double-Sided Coin and you want an alert to tell you when it’s ready. Here is how you’d make a simple alert that displays an icon on the screen:

After that you can customize things in the Display, Load, and Animation tabs, but that is the basic process of creating a new Weak Aura. If you were doing this for a spell or buff, you would obviously make different choices in the trigger setup.

spoilofthelamb asked:
Are there any skins for existing pet types you really want to see made tameable?

More raid bosses! There are several good ones from Mists of Pandaria raids like Thok (devilsaur) and Tortos (turtle). I also want more bear pets, maybe the Amani bear mounts? Bears are one of the only creatures in WoW that haven’t received some sort of visual upgrade over the years. I think we’re due.

ninjatwitt asked:
Ok, might be a silly question, but it’s been forever since I played my hunter. When Lock and Load procs, do you still want to weave in an Arcane Shot in between Explosive Shots, or hit Explosive Shot back to back?

You do not need to weave anything between the Explosive Shots. You won’t lose any damage, and in most cases you should use those Lock and Load charges immediately. It’s been like this for years, but the past behavior is still ingrained in many people’s minds.

spoilofthelamb asked:
Anyone have any really tough taming stories?

The tame that took me the longest was King Krush. It took me about 5 years to finally find him alive. I looked for him on and off all those years, seeing him dead several times. One night I logged off in Sholazar Basin near one of his spawn points. When I logged in the next morning, he was patrolling 15 yards in front of me.