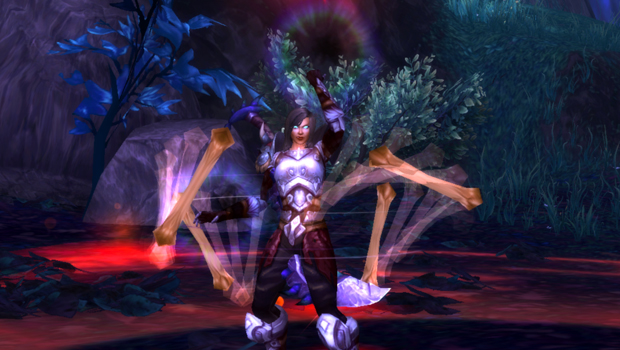 Even as I begin today’s column, I am cognizant of the fact that it picks at a topic that has been discussed to death (no pun intended) within our community. Nonetheless, it is one that I believe should be addressed given that many misconceptions about it exist. When wrapping up my previous entry in Plaguebearer, I noted that I planned for a future post to address the reasons behind my belief that the Rune Regeneration tier of talents feels lackluster and unsuitable for Death Knights, particularly in light of the way our resource system is structured. Over the past week, I’ve come to the realization that properly making my cause requires tackling multiple issues — far more than a single article could hope to handle.

Thus, today’s entry focuses on what I consider to be a single yet significant problem within this talent tier — why one particular talent is far more powerful than the majority of the Death Knight community realizes, placing it above and beyond its competitors. Additionally, I’ll address the innate flaw behind the ability of community tools to properly assess the value of this talent.

A step above all others

I am, of course, referring to Blood Tap. What is it about this talent that makes it so appealing? Why would I claim that it is more powerful than either Runic Empowerment or Runic Corruption when it’s been mathematically shown to grant the same average amount of regeneration? Simply put, Blood Tap confers two advantages that its counterparts do not.

First, it refunds Death Runes. While this is admittedly the lesser of the two reasons for its superiority, it does means that it offers a degree of flexibility that neither of its competitors can offer. Not only can Death Runes act as any resource type, but they can also be paired with any other type of rune for multiple-rune cost abilities. Unlike Runic Empowerment, there is never the risk of an “incorrect” type of rune being refunded, nor is there a risk that an entire third of your returned runes on the spot will be useless for the specific function you desire (as can be the case with Runic Corruption).

The effectiveness of immediate Death Rune return is particularly realized during periods of AoE: Not only can these runes immediately be used on Blood Boil or Howling Blast, but proper gaming of Blood Tap can see additional rune types that would not normally serve any function in instances of AoE converted to Death Runes. Blood Death Knights will also be able to attest to the value of Death Rune return allowing for greater flexibility in between weaving in Death Strikes amidst Blood Boils.

The true power of Blood Tap, however, is only fully realized by its secondary and most understated advantage: Control. In a world where RNG defines the course of multiple class and encounter mechanics, Blood Tap offers Death Knights complete control over what is arguably their most important mechanic. After all, the majority of Death Knight play revolves around mastering our unique resource system. Why then, is there so much ambiguity amongst players about whether this boon actually averages out to be a sizable gain?

The easiest spec to get out of the way here is Blood. Given that Blood’s entire Active Mitigation system revolves around reactive Death Strike timing and resource pooling, the power of a talent that allows up to 2.5 Runes (i.e. maximum of 12 Blood Charges) to be banked and used at will cannot be understated. This talent is also always consistent, and never fails in delivering its payload when called upon — there is no chance of “unlucky streaks” or of missing an Active Mitigation ability at a crucial time when playing with Blood Tap. While spike-damage intake and the relative importance of Death Strike timing have diminished in Warlords, the base concept still remains true.

But what about Frost and Unholy? What about cases where it’s possible to simply sim out the average gain of Blood Tap based on preset combat actions where the sim optimizes its use? Let’s examine some simulated results of Level 60 talent performance relative to one another.

Next we see a comparison of Unholy’s average performance when utilizing Necrotic Plague and Unholy Blight on a cleave-heavy fight:

All three talents seem to be performing within a reasonable degree of one another, right? In fact, you’ve probably read forum posts claiming that Blood Tap results are usually “perfectly simulated”, and that any errors on the player’s end will result in lower average DPS.

Unfortunately, this line of thinking continues to miss the greatest flaw and reason behind why Blood Tap is so undervalued: The “optimum profile” still uses preset conditions about when and where to use Blood Charges. This means that it fails to account for how a player might adapt to encounter mechanics or raid strategies, and still attempts to present a rough average for what it thinks a player’s average level of rune regeneration should be. In doing so, the true ability of a player to control and correctly pool resources is almost entirely glossed over. This itself is symptomatic of a much larger issue present within Simcraft in relation to how it models the Death Knight resource system. We recently had a discussion about this in #Acherus, when I made my assertion about Blood Tap’s optimum profile within the sim masking its true potency. Simcraft developer Navv had some very pertinent points to add.

<Navv>: I’d extend what Magdalena said with “Simulating the rune system in general and how it interacts with many game mechanics is, in general, a futile exercise.” The sim cannot express all the situations you come across with the rune system with sufficient… Let’s call it clarity… For basically anyone to model correctly in the APL.

The important takeaway point from Navv’s comment is that it is technically impossible for the sim to truly measure how great that gain actually is from optimizing Blood Tap. Given that Simcraft’s default profiles only handpick a few conditions (“Patchwerk”, “Helter-Skelter” and “Hectic add cleave” to name a few) to model fights after and given the rigid nature of Action Priority Lists, proper Blood Tap usage would require accounting for nearly every variable present within a given encounter.

As such, the sim is ill-equipped to properly do the job and only ends up providing a rough average for what it thinks should pass as optimal rune regeneration. This type of modelling is likely to be much more accurate for both Runic Corruption and Runic Empowerment, given that they truly are passive in nature and can thus be averaged out (I’ll discuss Runic Empowerment’s own flaws and the reason behind why it is a trap talent in another column).

Cognitive Dissonance and the way forward

Part of the reason that I believe players tend to go by the sim’s logic is because they mistake levels of average rune regeneration with the talent’s effectiveness. Worse still, many forum posters claim that the true gain from mastering Blood Tap (as informed by the sim) is so minimal that players are best off macroing it into a Runic Power dump, and treating it passively. This misconception is understandable, but no less damaging in the effect that it has: It leads to a vicious cycle of relying on the sim to provide “mathematical proof” of an assertion that does not consider whether the entire equation itself might be flawed in its premise. It also points to a greater need within the community to critically reflect on proper utilization of the tools that we use. For the sake of efficiency, here are three points I’d like everyone to take away from this:

By the way, in case any of you haven’t put two and two together: Yes, the current state of Reaping and Blood Rites that I referenced in my previous column further incentivises the use of Blood Tap. I’ve only chosen to mention it here because it’s a relatively minor bonus compared to the benefits of the talent that I’ve extolled above. Ultimately, my main goal with today’s column has been more of a critique of the way with which the community processes sim data, rather than comment on the talent tier itself. There is a great deal more analysis to be done on that particular topic, but it will have to wait for another time.

Blizzard Watch is made possible by people like you.
Please consider supporting our Patreon!
Filed Under: Blood, Blood Tap, Frost, Plaguebearer, Unholy
Advertisement