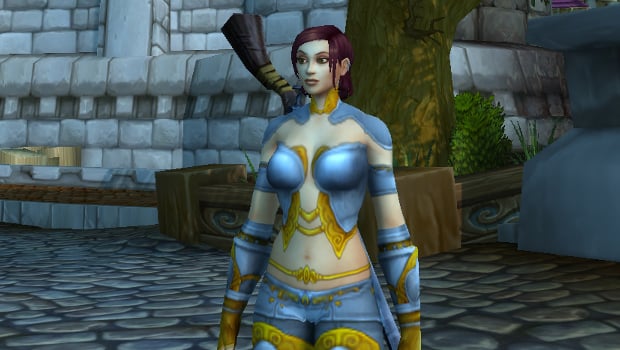 All my toons will eventually get a Salvage Yard once their garrison is upgraded to Level 3.  The BOE greens I get……auction, DE (on my priest), or vendor?  This is to maximize gold output since I don’t have time anymore to farm the mats for craftable mounts, so just gonna buy them.

This depends on a.) your server and b.) the amount of time you want to invest into the activity. That latter part is an issue for me, so I tend to vendor everything except level 100 epics and crafting materials. I don’t disenchant anything — low level enchanting materials are next to worthless and Warlords of Draenor enchanting materials aren’t worth as much as the greens they come from. Let’s say, for example, you have a green 2-handed weapon that vendors for around 40 gold. If you’re really lucky, maybe you’ll get 7 Draenic Dust from that item. If each Draenic Dust is only selling on the auction house for 4 gold each, you’ll get 28 gold out of that 40 gold item. The values shift if you’re then converting Draenic Dust into Temporal Crystals, but I still find vendoring the greens is worth more.

If you really want to sink time into salvage, you’ll want to learn which greens sell well as transmog gear and which ones are better off in the trash. As you might expect, the “sexy” gear is worth the most. Pieces of the Ornate set, which is the level 50ish mail armor pictured in today’s header image, will sell for 500-1000g per piece. The items might not sell immediately upon listing them, but they will eventually sell. My significant other used to have a bank alt with a full guild bank dedicated specifically to wheeling and dealing in the transmog market. She made a killing. This depends, of course, on whether or not your server/server cluster has a strong transmog market. It might not. Investigate!

Even if you vendor absolutely everything, the salvage yard is extra profit on every single mission you run.

OK, so I know the basic story behind the mana-bomb in Theramore. I hear people refer to it all the time, especially when discussing lore, etc. However, I have somehow missed the actual event, even though I have been leveling some alts. I know this is A Major Event, and I skipped most of Cata and Pandaria when they were current. So where do I go to see this happen? I feel like I’ve missed so much by not experiencing it, and I don’t know what quest line to do, or even what area to look in to see this part of the story.

If you’re hoping to see it in-game, you’re out of luck. The bombing itself is not in-game, but in the novel Tides of War. There’s a scenario in-game that relates to the aftermath of the event, but when you get into the scenario, it has already happened.

There is little to no explanation about it within the game itself. That was a huge criticism at the time — the scenario explained nothing. It’s all external.

When do the Queue authors tend to pull the questions they are planning to answer?  What time of day does this happen, generally?  Do you pull them well in advance of composing your answers, so that you have time to contemplate them, or is the pulling done right when you sit down to tackle your Queue for the day?  A few of us were discussing this earlier today, it would be interesting to discover what timing each of you follow.

For me, I find it simplest to wait until early morning the day it’s to be published before doing anything with The Queue. Otherwise, you spend all day long staring at the comments, hoping someone asks another question. Life is easier if I let them build up before worrying about it. As I answer this question, it’s 5:15 a.m. Central time. Before I conclude today’s edition of The Queue, or turn to Twitter for questions, I’ll scroll to the very bottom of the comments section — that is, the oldest comment on yesterday’s post. I have no idea if I’ll go to Twitter for questions today or not! I haven’t gotten that far yet.

How do Diablo 3 seasons work?

It isn’t really a big deal, just a “see what you can do within X amount of time” for-funsies thing. People seem to make a much bigger deal out of it than it really is.

Does anyone visit their garrison outposts after max level? I haven’t been to mine in months and even forget they are there. Is there a reason to stop in from time to time?

If you’ve completed the zone they’re in, then no. No reason to go back. Absolutely zero.

Is Tanaan open on the PTR? I still have heard nothing about the content there.

Tanaan is open, but it seems largely barren of content so far. There are buildings, there’s scenery, there’s mobs. What you actually do there is so far a big question mark. Bits and pieces have showed up in every PTR build, but there isn’t any playable meat. Only bones.