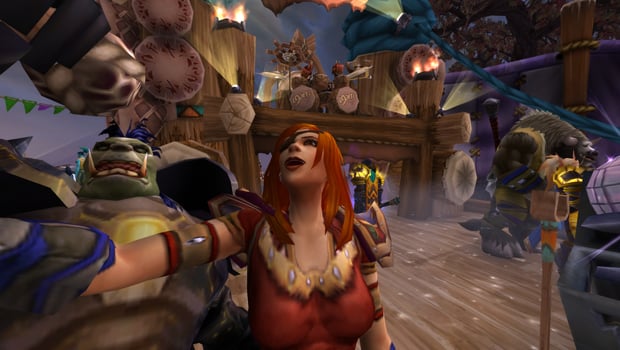 Welcome to The Queue, the Q&A column for all things Blizzard related. If you have a question for the Queue, leave a comment and you may see it answered tomorrow!

I did not actually notice until opening my selfies from this week’s leveling stream that ETC didn’t get the same model upgrades that everyone else received in Warlords of Draenor. Of course they’re still called L90ETC on the banner too, so I’m just going to chalk it off to the band still foolishly trying to cling to the good old days. That’s definitely it.

How hard is it to get savage blood?  I have a level 2 barn that I could upgrade to level 3 but that is not my problem.  My problem is that the alt that has this barn doesn’t have good gear and probably won’t get any.  Is it difficult to trap the elite beasts with single poorly geared alt (enhancement shammy)?

I wouldn’t try it solo, but there are always usually trapping groups available in the Group Finder — it’s much, much easier to do that way.

Q4TQ: Just finished reading “Day of the Dragon” by Knaak. Ignoring the canonical problems with the work (which I don’t consider the author’s fault since it was literally the first Warcraft novel), how the heck do the quest designers get away with Lady “Prestor”. I mean, seriously, did they ignore the book entirely, or was Krasus a jerk who happened not to mention to anybody that she shared a human name with Deathwing?

There were only two people that knew for a fact that Lord Prestor was Deathwing — Krasus, and Rhonin. Keep in mind that Day of the Dragon happened after the Second War was done and over with. Also keep in mind that both Krasus and Rhonin were firmly entrenched up north in Lordaeron — they weren’t anywhere near Stormwind, and definitely nowhere near it once things started going down with Katrana.

Once the Third War started up, Krasus was kept busy up north — he was directly involved with what happened immediately after the Sunwell’s destruction, as detailed in The Sunwell Trilogy manga. He was pretty much the reason Anveena existed in the first place. And at some point after all that went down, both Krasus and Rhonin were sent back in time, pre-Sundering, as detailed in the War of the Ancients trilogy.

And once they got back from that, Antonidas was gone, Rhonin was subsequently made leader of the Kirin Tor, and I suspect both were far more invested in what was was left of Dalaran and the Kirin Tor to really take notice of anything going on in Stormwind. It wasn’t really an area of the world that either were involved or concerned with.

Q4tQ: Considering what we have seen so far in the PTR newd about Timewalking Dungeons, do you think it will remain for TBC/Wrath dungeons only or extended for every dungeon/scenario ingame?

I like to think that this is a test that is cleverly disguised as being a feature. I’m hoping that maybe, if the whole Timewalking dungeon thing proves to be popular, that they’ll go ahead and throw open the rest of the dungeons when the next expansion comes out. It’d be neat to have the entire gamut of WoW dungeons available as options, rather than just however many happened to be released on a per expansion basis, wouldn’t it?

Q4tQ: do you have a favorite ridiculously misnamed item?  Something that, for one reason or another, has a name that just plain doesn’t fit it.

I’d have to say it’s Stickney’s Grey-Shade Hood, which is neither grey nor a hood, instead a gold and blue collar/faceplate type … thing. However, the reason why it’s my favorite should be blatantly obvious!

QftQ – not sure if this has been asked and answered, but has there been any progress in finding a priest columnist?

That is a search that is currently in progress — we’re going through the applications we received and sorting them out. We’ll have a columnist soon, hopefully!

Hearthstone Q4tQ: I have 1600 dust and wanting to craft a class legendary.  I’ve narrowed it down to Antonidas, Tirion, Jaraxxus, Mal’ganis, and Gromm.  Any thoughts?

Decks I have and like: Mech Mage, Muster Pally, Zoo Lock, and Patron Warrior.  I’ve been wanting to make a Handlock deck, but I feel I’m missing a few more cards (Alexsraza and whichever warlock legendary I don’t make.).

I went ahead and consulted with Matticus, our resident Hearthstone expert on this one, and he had the following to say:

“Tirion will be an auto-include in any paladin deck. Zoo warlock decks benefit immensely from Mal’ganis (but he’s useful in demon warlock variants as well). Grom would be also be fun to have in Patron Warrior. Antonidas can be found in both Mech mage, Freeze mage, and Tempo mage variations. There is no wrong answer with any of your selections but it largely depends on what class you want to play. Statistically speaking, Patron Warrior is the strongest and most consistent deck on the competitive ladder today. Liquid Hearth’s expert panel has unanimously voted Patron Warrior is the top deck of the current meta. While you don’t need Grom in your deck, he certainly won’t hurt and he functions as a component of the Control warrior variant.”

Hopefully that helps you out a little with the decision-making!

That’s it for today’s edition of the Queue — be sure to leave plenty of questions for tomorrow!