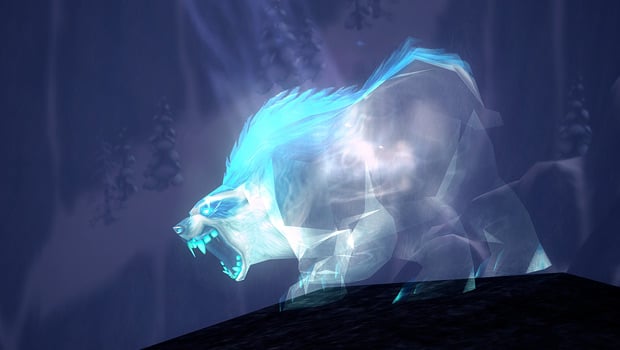 Welcome to Locked and Loaded, Blizzard Watch’s regular column for survival, marksmanship, and beast mastery hunters. This week, your host Adam Koebel (@BendakWoW) will be talking about rare hunter pets.

Ask most hunters what their most desired pet is, and chances are it’s something from Northrend — a pet like Loque’nahak, Arcturis, or King Krush. Admittedly these are cool looking pets, but the real reason people covet these pets is their rarity. Even though a lot of hunters have tamed them over the years, they still hold prestige that hasn’t been matched since.

There were only a handful of rare pets with unique skins in classic WoW, and many of them were cats, such as Rak’shiri and Humar the Pridelord (today these two specific looks are no longer unique). However, the most coveted of all rare pets was Broken Tooth (yes, another cat). This one didn’t have a unique skin but it had a 1.0 attack speed, compared to the standard 2.0 attack speed. There were other pets with non-standard attack speeds or bonus defensive stats, but ultimately Blizzard decided against this and all pets were normalized by patch 2.0.

The Burning Crusade wasn’t a very memorable expansion when it came to hunter pets. There were some new families to tame, but no standout rare pets. I suppose Burning Crusade’s claim to fame is the introduction of the vicious sporebat. 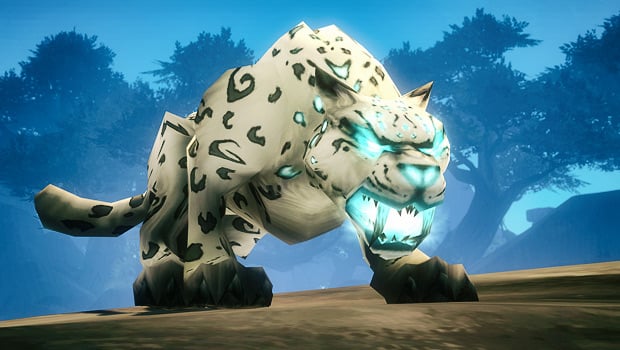 Loque’nahak – A hunter rite of passage

The age of the spirit beasts

Everything changed with the introduction of Loque’nahak. It was the first spirit beast and the first rare hunter pet with a truly unique look. Loque’nahak was exceedingly rare, spawning only once every 1-2 days in a busy zone (these spawn times were reduced when CRZ was introduced). I was lucky enough to tame mine early on, before the massive influx of leveling players entered Sholazar Basin for the first time. I had crowds of people following me around to gawk at my pet in Dalaran. Even years later it would still get attention because of its rarity. Not every Loque’nahak spawn was tamed by a hunter either since killing him is a required step of the Frostbitten achievement, making him even rarer.

With each Wrath patch, Blizzard added another spirit beast that proved to be just as popular as Loque’nahak. Wrath also introduced the entire concept of exotic pets, not just spirit beasts. 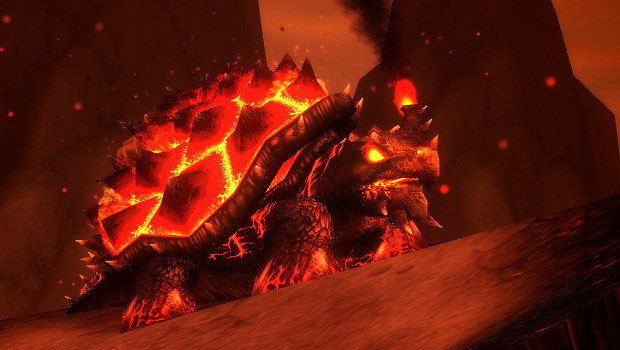 Cataclysm also had its share of coveted rare pets (Karoma, Sambas, and Ghostcrawler to name a few), but its lasting legacy is the introduction of challenge tames.

Some examples include Ban’thalos, the spirit beast which flew high in the sky, requiring you to aggro it, survive the fall, and begin taming before it lost interest. Two new spirit beast cats in the same area required you to remove all of your armor so they wouldn’t one-shot you. This particular mechanic had the added benefit of preventing non-hunters from killing them. The Molten Front also had some memorable challenge tames. 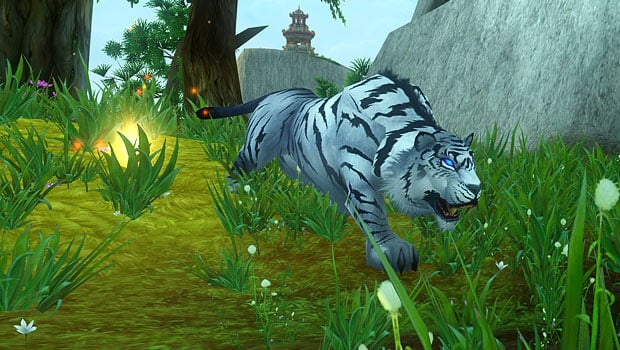 Revealing rare cat, Savage, with a flare in Jade Forest

Putting our tracking skills to use

Instead of having extremely long spawn times, Mists of Pandaria rare pets could only be revealed by hunters. They left footprints on the ground and hunters had to use their Flare spell to reveal them. It was less about waiting for the spawn (which was only about an hour) and more about finding the footprints and hunting them down. It was an interesting take on rare pets (especially since it almost completely prevented non-hunters from killing them), but the idea was never revisited.

In patch 5.1, Blizzard added a ton of new rare pets throughout the old world — a whopping 149 new rare spawn beasts (37 of those were previously untameable skins). While these are classified as rare, they aren’t rare on the same level as Northrend pets. Aside from another hunter camping a spawn point, you could reasonably expect to get one of these within 4 hours of dedicated camping.

Patch 5.2 finally added some new spirit beasts. These pocupines were challenge tames that required you to perform a mechanic like interrupting a heal and bringing its health below 30% before you could tame. These were the first spirit beasts that were not rare spawns, and it’s probably good that they exist. Without them, hunters who want this particular pet family would have no choice but to camp for one of the rares.

Despite there being no new rares (aside from a couple hydras in the old world), hunter pets in Warlords were very much a fan service. We received several new families that we’ve been nagging the developers about for years, mostly notably hydras. One of those hydras was Chimaeron, a raid boss from Blackwing Descent which requires you to DPS it below 20% before you can tame. Other pets like Teroclaw Chicks were added specifically because players asked for them in beta (unfortunately not many use them because of their lack of a useful buff).

The true highlight of hunter pets in Warlords is Gara. If you’re still unaware, taming Gara is essentially a mini class quest for beast mastery hunters. You should visit her in Shadowmoon Valley (while specced into beast mastery) if you haven’t yet. If you want a real challenge you can discover how to tame her on your own, but if you want a guide I wrote one here.

One could argue that the developer time put into Gara left no room for other unique tames in Warlords. 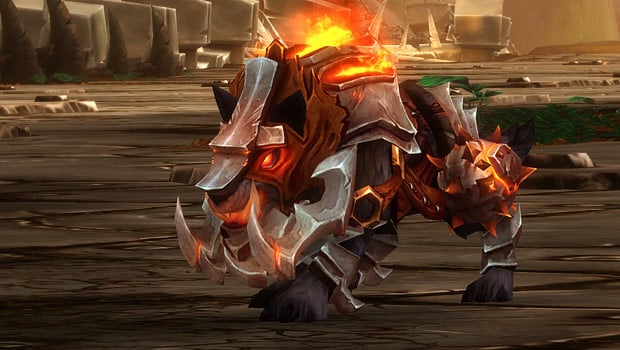 I miss hunting for new rare pets, but I’ll accept that the game and its players have changed to the point where 24-48 hour respawn pets probably can’t work anymore. Players are more informed nowadays, so the competition would likely result in the pet dying more than it was tamed. Then again, maybe it’s OK to have one or two “impossible” pets. Loque’nahak, which was once seemingly impossible, eventually became easier as we moved onto new expansions. It makes finally taming such a pet that much more fun.

If you ask me, something as cool as the Iron Warwolf (coming in patch 6.2) should have been a rare spawn or challenge tame. I’m glad we’re getting another cool pet (seriously, it might be the coolest wolf yet), but it definitely loses some of its lustre when anyone can walk up and tame it with no effort. I also think it’s a missed opportunity to not have a rare fel wolf (like Gara but green instead of purple) somewhere in Tanaan.

I thought the track hunting rares in Mists were a pretty good compromise. While they weren’t very rare, it at least took a small amount of effort to tame them. I’d also love to see more challenge tames, maybe even combining that with the track hunting.

My hope is that the next expansion has a better balance of rare to common hunter pets, so that those of us who enjoy the hunt will be given the opportunity to stand out.

Which expansion do you think handled hunter pets the best? Do you like the ultra rare pets of Northrend, no rares like in Draenor, or something in between?

Did this post get you in the mood to hunt for some rares? The best place to browse them is over at Petopia!

RyanMcKee asked:
Can you please do a blurb on when and where to use Focus Fire?

In short, you want to stack it with your cooldowns like Bestial Wrath and Stampede — even if it’s not at 5 stacks. It’s also ideal to use it on the pull as soon as you get a single stack. Also use it if any number of Frenzy stacks are about to expire. I strongly recommend using this WeakAuras group for Focus Fire.

lovelywaz asked:
With 2p Tier 17 set bonus for beast mastery hunters and the Talisman of the Master Tracker, you will most likely have your pet angry ALL the time. And if it also affects the extra pet summoned by T17 4-piece set bonus…then it’s even better!!
I fear there might be a nerf or some adjustment for beast mastery hunters, or it may end up being very powerful with 2-piece Tier 17 set bonus?

Keep in mind the talisman drops off Archimonde. Sure, there’s a chance you will still be using tier 17 bonuses by the time you kill him, but you’ll be moving onto tier 18 gear pretty quickly if you’re killing Archimonde. Also, in order to keep that 2-piece bonus you wouldn’t be able to use the T18 4-piece. I’m fairly confident the increased stats from item level and new set bonuses will be better, but in the off chance they weren’t it would be nerfed.

I’ll be talking more about T18 set bonuses soon (still waiting for some bugs to be fixed on the PTR).