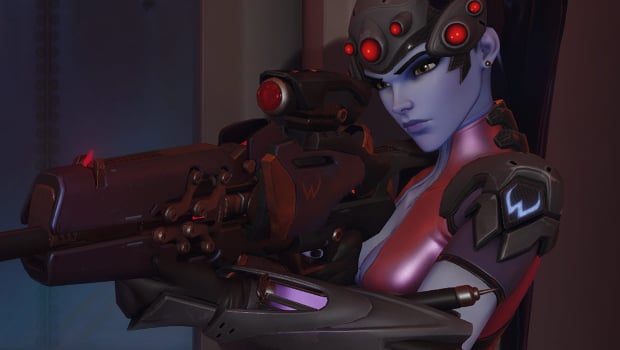 Overwatch‘s Widowmaker is the subject of the latest gameplay preview. I daresay Widowmaker is one of the more highly anticipated Overwatch characters alongside the mascot Tracer. The first half of today’s video doesn’t make her look like much — but she pulls it together for the second half, and given her match ends in defeat, that might have been too little, too little.

In the early stages of the match, Widowmaker seems a little too greedy for sniper kills — while she starts out utilizing vantage points and high ground, she too often lets herself become embroiled in close-quarters combat. Though you would expect a character like Widowmaker to retreat from such engagements, she stands there and soaks damage, still attempting to use her scope. Considering Widowmaker has access to her grappling hook as a method of escape and an assault rifle fire mode for close engagements, attempting to snipe such close targets was foolish at best — and often ended in her demise. She spent such engagements almost completely blind.

When Widowmaker finally pulls it together, she does so in a big way. She not only makes better use of the environment (its vantage points and its pathways) but seems to remember she doesn’t need to use her sniper rifle at all times, scoring a few kills with her assault rifle. If nothing else, this video serves as a cautionary tale to anyone hoping to play Widowmaker when Overwatch is in players’ hands: don’t live in your scope. Especially not when Tracer and McCree are circling you like a pair of hungry sharks. It isn’t good for your health.

As far as team play, remember that Widowmaker’s thermal vision doesn’t apply only to her field of view. When she activates the ability, her entire team receives the buff. If you watched any of the previous Overwatch videos, it’s likely you’ve seen this in action — characters such as Pharah who can lead their shots benefit immensely from the ability to see their enemies coming before they arrive.

Blizzard Watch is made possible by people like you.
Please consider supporting our Patreon!
Filed Under: Overwatch-gameplay-trailer, Widowmaker, Widowmaker-preview
Advertisement