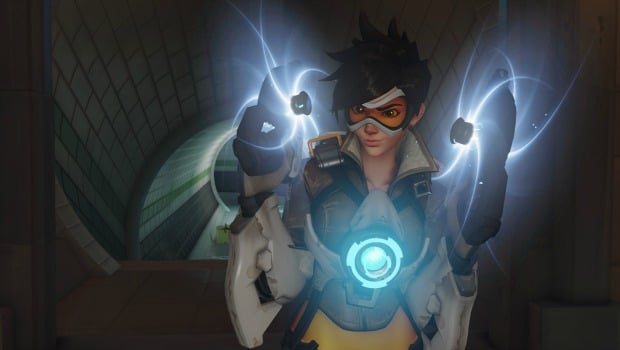 One of the more popular and flashy champions in Blizzard’s upcoming first person shooter Overwatch is the time-bending Tracer. With her two burst pistols, her massively-destructive Pulse Bomb, plus her ability to blink several yards ahead of her position, she is the ultimate hit-and-run assassin for the title. The new gameplay video below shows her use all of her talents to full effect in a match to finish with the most kills and no deaths.

The video also spotlights one of her more interesting talents, Recall, which transports her back to where she was physically a few seconds previously, including restoring her health and ammo to what it was at that time. As you can see in the footage, she uses that ability to not only to escape sticky situations, but as a way to heal herself after taking a sudden hit of burst damage.

Like what you see? Check out the previously released gameplay footage for other Overwatch champions including Hanzo, McCree, Mercy and Zenyatta. Overwatch is expected to go into closed beta in the Fall. You can sign up now for it.

Blizzard Watch is made possible by people like you.
Please consider supporting our Patreon!
Filed Under: Overwatch-alpha-footage, Tracer, Tracer-gameplay, Tracer-video-footage
Advertisement