The Queue: Should we tell them? 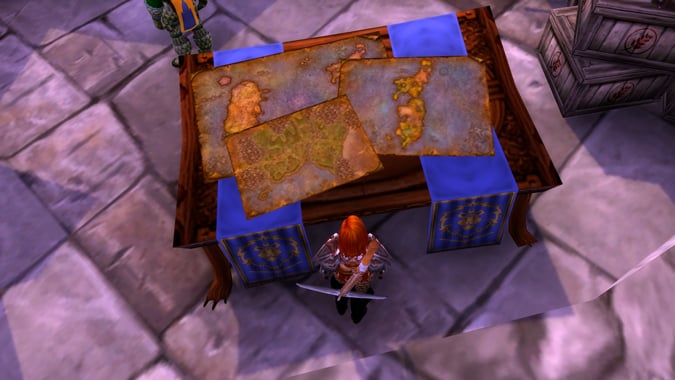 For some reason, the forces stationed in Outland are studying maps of Southshore. Or at least it really looks like Southshore. Uh … so do we tell them about that whole cataclysm thing, or do we just let them be, at this point? Also, why are they interested in Southshore at all? I mean, it wasn’t exactly a tactical powerhouse or anything before it was … you know, goo central.

Will there be any way to stream the new expansion announcement next week?

Yes! Blizzard will be streaming the event live at 9 a.m. PDT on August 6. We don’t have the exact details just yet, but any new information regarding the stream will be made available on Blizzard’s official Gamescom page.

If you had to choose between doing loremaster on only horde or only alliance which would you pick?

That is an incredibly difficult question to answer! Both sides have some amazing quest zones, particularly after the Cataclysm revamp. I think I’d have to lean Alliance, though, because I really like the zones on both continents. The quests don’t exactly have a ton of happy endings, but I’m a sucker for a compelling story, and the nostalgia factor for places like Darkshore and Duskwood is just too much to pass up.

QFTQ is it possible Blizz are holding out for Blizzcon to announce another Diablo expansion because of the wow news now?

It’s possible — anything’s possible, at this point. I actually don’t mind that they’re announcing the next WoW expansion at Gamescom, and I’ve mentioned this before on the podcast. By doing the announcement now, it means that there’s several months between the announcement, and anything they give us at BlizzCon. They can pretty much watch the community between now and then, see what we’re asking about the most, and tailor BlizzCon to answer those questions, instead of just giving us a mass info dump to process and sort through. It’s not a bad idea at all.

Can you queue for a specific WoD heroic over and over again (obviously with loot lockout), or is it only in Mythic and Regular you can do unlimited runs?

Queuing for a specific heroic through the dungeon finder will lock you out of the instance for the day. Queuing for a random heroic will not — but of course, with the random heroic you’re not necessarily guaranteed to get the one you really want to run. With Mythic dungeons, the lockout is specifically for loot — you can run the dungeon over and over, but you’ll only get the loot once.

Which is longer, “a thousand mortal lifetimes” or the Hydraxian Waterlords rep grind?

It depends on which version of the Hydraxian Waterlords rep grind you’re talking about. The original rep grind took forever to complete, mostly because once you hit a certain reputation level, the only thing that would give you additional reputation was killing bosses in Molten Core, and you could only do that once a week, so it was this incredibly lengthy process. That said, a thousand mortal lifetimes? Still way, way longer — I mean I’ve got exalted with the Waterlords on two different characters, and I’m only in the middle of one mortal lifetime here.