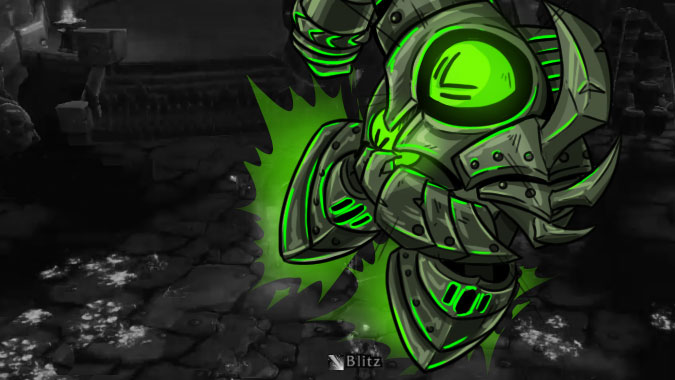 To get one of the top ranks on Iron Reaver, all gear levels and specs included, your team needs to kill the boss before the air phase starts. So unlike ranking on Hellfire Assault, where you could rank with an ‘average’ team by doing a majority of the AOE on add packs, Iron Reaver is a different story. At least for the very top ranks, where Mythic-geared raiders are destroying Heroic Iron Reaver in about 2 minutes.

I took a look at the top 25 ranks a couple weeks ago. The players averaged 717 iLevel, and their teams averaged 712. These teams also killed the boss in 2:11 on average. The fastest ones so far have been 2:01. Then I took a look at the top 25 rankings from this week. The ranked players and their teams both increase iLevel by 2 on average. Other stats are very similar, with one exception: the average kill is 15 seconds faster, averaging 1:56. The fastest kill is 1:45.

Over the past two weeks, something else has changed: Affliction Warlocks got some buffs on July 20. Drain Soul damage increased by 50% and now causes damage over time spells to instantly deal 50% of their normal damage (up from 40%). Haunt damage was also increased, by 25%, and increased periodic damage dealt by 35% (up from 30%). “The buffs to Affliction definitely feel good because we were basically stuck playing Destruction on everything,” Havik commented, holding a top rank (WCL). “The buffs brought us closer to what Affliction was doing before the tier 18 2-piece nerf [where the proc chance was reduced].”

After these buffs, Affliction Warlocks took the top ranking spots away from most of the Marksmanship Hunters and Arcane Mages. Of course you can compare what would happen in a perfect world with SimC, but I wondered how these changes shaped out in real fights. So I dug through a whole bunch of pre-nerf logs for Affliction Warlocks (which was hard to find as many top players were Destruction pre-buff), to get some actual numbers, uptimes and fight lengths. Then I recalculated what their damage would be with the buff and found that DPS increased by 8-11%.

As an example, I found a set of before-and-after logs where the fights were pretty similar. After the buff, he has 2 more iLevels which gave him about 10% more mastery, but his trinkets and set bonuses are the same. You can see on the right (post buff) how much more damage each of the abilities does. 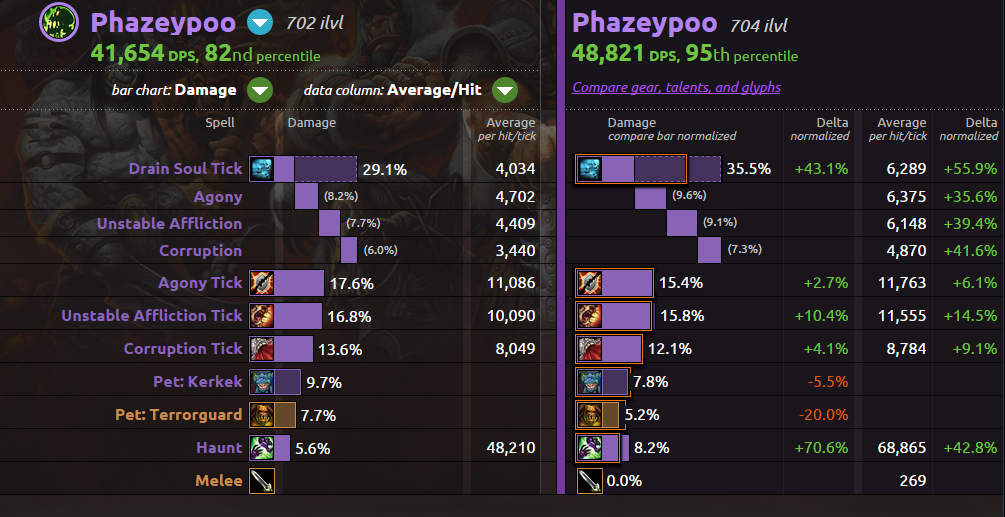 Gahddo, my go-to Warlock theorycrafter, shared some insight on the buffs. “We [Affliction Warlocks] have some insane single targets DPS now, probably the best in the game. Which is fine in my opinion, because Affliction lacked a niche prior to the buff.”  Well, based on Iron Reaver rankings, it appears he’s right! He also said, “Once again, we have a case where a buff indirectly favors Grimoire of Sacrifice. This talent is now the default on every fight for Affliction Warlocks. Soul Leech also got a lot better since it gets a shield based on Drain Soul damage.”

I found some pretty interesting cases where a different item or set bonus yielded large DPS gains. The following examples have been collected over the past couple of weeks, and although things have changed with the July hotfixes, they still hold relevant.

The Tier 18 trinkets can make a pretty big difference, especially when you are lucky enough to obtain ones that ‘synergize’ well with your spec. Take Forena and Available from Prevenge on Laughing Skull. They were in the same raid with similar item levels and similar skill levels (I chatted with both of them about this). In their raid on July 21, Available didn’t have any Tier 18 trinkets, but Forena did.  That made a pretty big difference in their damage, as you can see from the comparison. 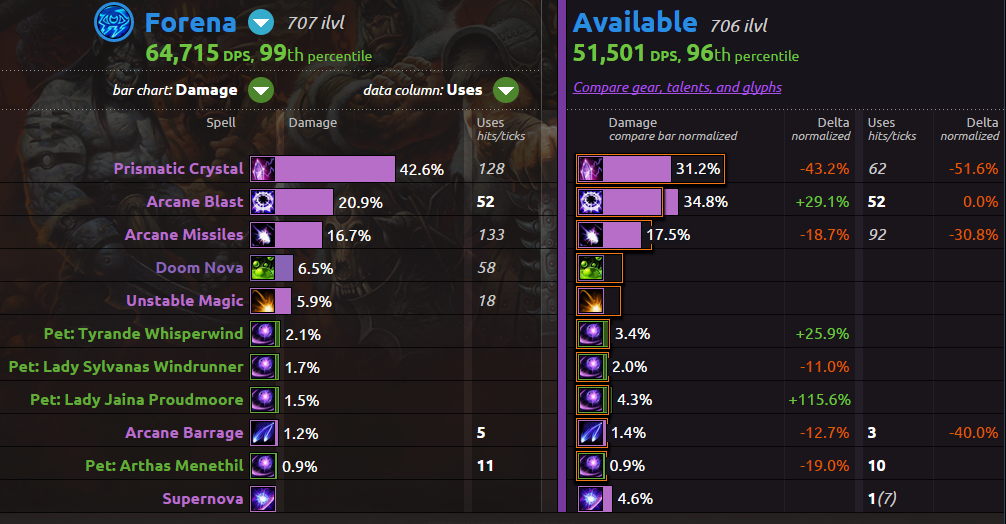 “Both of these items grant an extremely large boost to dps, with the Mage trinket boosting the effect of your Arcane Power significantly, and the Prophecy of Fear having great synergy with the Arcane Mage kit,” Forena told me.  “Available is a very good player and I expect his dps to match mine as soon as he gets these two items as well as the legendary ring, I was just fortunate enough to have both trinkets given to me first.”

There’s one other major thing that boosted Forena’s damage: an extra Arcane Power. For a fight of this length (4:20), you can fit in 3 Arcane Powers. Looking at your logs and estimating how long it will take you to kill each boss helps you plan your major cooldown usage. This is important even if you aren’t trying to rank!

For example, I talked with Heau, a Marksmanship Hunter.  Heau is known to his guild as “The Padder Police” because he’s been pretty harsh on them when they pad the meters instead of following the strategy. In fact, when I first reached out, asking to chat about his ranking for this fight (WCL), he thought his guildmates were playing a prank on him. I resisted my urge laugh and instead confirmed I was in fact a real person asking him real questions about his ranking.

It turns out, he expected the fight to last about 4:20 based on previous kills, which would allow him to squeeze in 3 full Rapid Fires. However they killed the boss 5 seconds early, making him lose out on half of the Rapid Fire, which would have been about 2% more uptime. Seems small, but every bit matters!

Set bonuses have such an impact on damage, that they often change our rotations or even which spec we choose.

If you recall, Beast Master Hunters were favored in BRF, but now Marksmanship Hunters are among the top of the charts in HFC. I asked Azortharion about this, my go-to source for Hunter theorycrafting. Most of this comes down to the 4-piece set bonus: The cast time of your Aimed Shot is reduced by 100%, making Aimed Shot an instant cast nuke. “Aimed Shot is almost guaranteed to crit on targets above 80% health, and those crits return 20 focus,” Azortharion explained to me. “With the Thrill of the Hunt talent buff up, the cost of Aimed Shot is only 30. So if you get a lucky crit-streak, you can Aimed Shot 7 or 8 times in a row.”

Heau said the set bonus doesn’t change the spell priority much, since Aimed Shot has always been the focus. But he admits it changes the feel of the rotation tremendously, making everything happen really fast and adding a lot of filler spells. For example, last tier he said Aimed Show fell very slow, with Rapid Fire giving you a short duration of infinite focus. Then looking at this 4-piece set bonus for tier 18, “it’s extremely fast and it is definitely easy to burn through all focus inside a Rapid Fire.”

A helpful UI tip from Azortharion: enlarge nameplates on enemies that are below 35% health for Kill Shot for Hunters. Obviously, you can do this for any class where your abilities do more damage based on the target’s health. You can do this with ElvUI (screenshot below). And @warlockspirit on Twitter had some tips when using Tidy Plates: you can set the health bar to large and/or green for targets >80% health and red for <35% health. I tried this out on one of my characters, and I have to admit, it’s pretty fantastic. 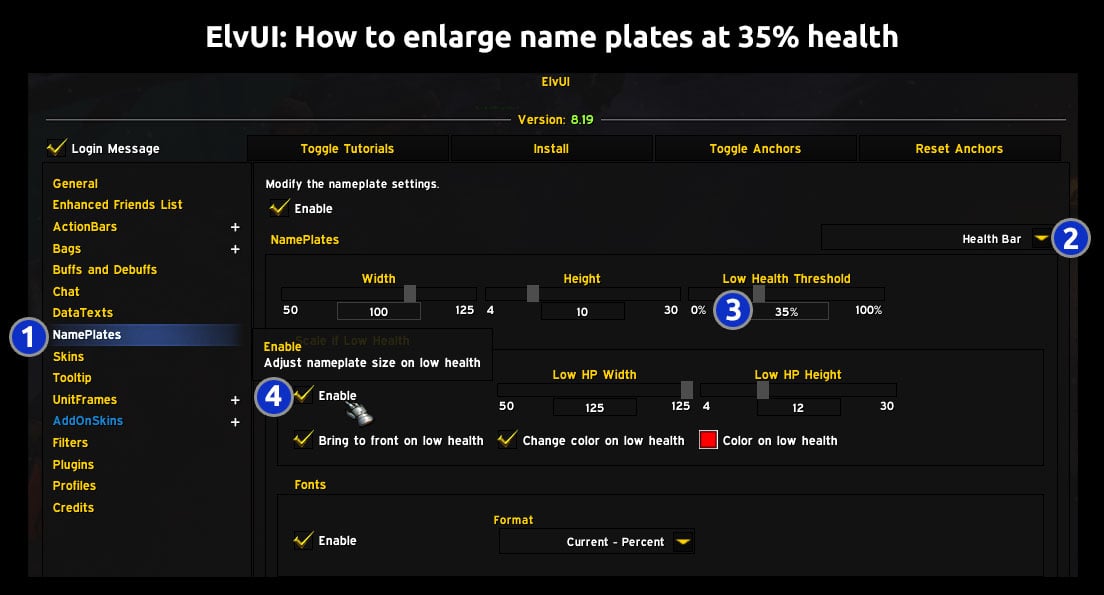 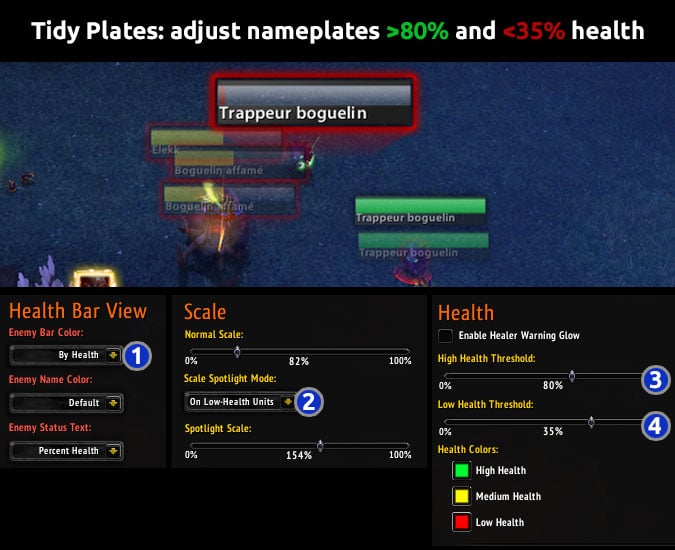 About the comparison screenshots

I posted some comparison images but didn’t explain them in detail so as not to get side tracked on the main point. But I do want to make sure you have all of the information necessary to get full value from comparing two players. Below is a video that explains how you can compare yourself to any other log, as well as highlighting a few tips about what different numbers or columns mean.

Enjoy your DPS burn on Iron Reaver this week. Hopefully I shed some light on the ranking scene, even if the Mythic-geared teams are destroying the fight in 2 minutes.

Blizzard Watch is made possible by people like you.
Please consider supporting our Patreon!
Filed Under: Climbing The Ranks, Hellfire Citadel
Advertisement