The Queue: Johanna is perfect 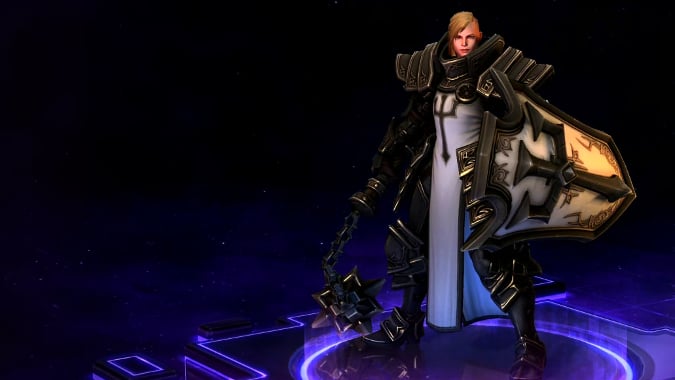 I don’t actually discuss Johanna in this Queue, but she’s relevant.

Is anyone else starting to notice how low-res pre-Cata gear looks compared to later gear, especially the Draenor gear? I think I’d give up two raid tiers to get all the old gear updated as well as convert chest pieces to 3d.

When I transmog my characters, this is definitely an issue for me. Some of the old pieces of gear still hold up, but many of them are so low-res they look like they came from another game entirely. As much as I loved those sets back in the day, I can’t bring myself to wear them anymore. I certainly would love to see some of them updated — even if the “new” gear from a future expansion was all complete remakes of the old gear. I’m sure there are people who’d whine about that, but… that old stuff was all really cool. I’d love to see them updated.

I just realized that since vol’jin has been promoted to warchief the orcs are now the only race in azeroth that doesnt have a racial leader anymore. Thrall corrected his mistake by killing garrosh but that didnt make him want to be a leader any more than he already did. so who would you think would be a suitible candidate?

I suspect Thrall will always be considered their racial representative unless he gets killed off at some point. Even if he isn’t constantly out there on the front lines, he can fill the role of ensuring his people are represented in the Horde. There are few faction leaders who do go out and fight on a regular basis. The orcs have been a bit spoiled in that sense, I’d say. That isn’t me casting aspersions on orc players or anything like that — I just mean orcs are one of the few races that have had a constant presence in the cast of “main characters.”

I’m pretty sure I’m in the minority here, but I don’t understand why do people play mostly Human characters (or in horde mostly Blood Elf, which is the most human-like you have in that faction). I mean, we are, or at least I am, human 24/7, wouldn’t you rather play something else entirely in a game?

My chars are all Goblins and Tauren in horde, and I have one Gnome in alliance that I picked up to play with my friends before there was Worgen (I may have chosen Worgen instead because at least they are humans only when you want to). I don’t play troll because I don’t really dig their rastafari-like looks and talk.

I am a human in real life, that’s true. However, I’m not a champion of the Light who wades into battle against the undead with sword and shield, a stalwart defender of justice and honor, leaving naught but ash in my wake. I’m not an army commander, I don’t call Stormwind my home, and I don’t stare defiance into the eyes of dragons. Those things would all be pretty cool, though. So I play a human in World of Warcraft.

Do you play HotS against AI opponents or against other players?

Primarily against AI opponents. On the whole, I’m a pretty chill dude — until it comes to competitive gameplay. When playing against other humans, I turn into a horrible human being. Rather than subject people to that, I simply don’t PVP. I only do it in Hearthstone where it’s the only way to play. Those of you who follow me on Twitter will know I do, in fact, turn into a horrible monster when playing Hearthstone.

Recently I’ve heard people (you guys on the podcast, and others) complain about Saurfang attacking the Alliance in the Gunship Battle. But if you play Horde, it is the Alliance that attacks first. Am I missing something here? Have Blizzard come out and said that one of them is canon and the other isn’t?

Blizzard does this often with the Horde/Alliance conflict. Whichever faction you’re playing is the “victim” in the situation. If you’re Alliance, the Horde attacked first. If you’re Horde, the Alliance attacked first. Rarely is there a canon answer to which is which. In the case of the gunship, if you’re Horde, the Alliance gunship rolls up and tells you to leave. Saurfang refuses and opens fire. If you’re Alliance, the Horde gunship rolls up and tell you to leave. Muradin refuses and opens fire. Blizzard seems to avoid making the player feel at fault whenever possible — even when it makes the story confusing. Many of these real life Horde vs. Alliance arguments are the result of Blizzard making both factions the innocent one… even within the same event where clearly someone must have started it.