Spiritual Guidance: The conundrum of Class Halls and Artifacts 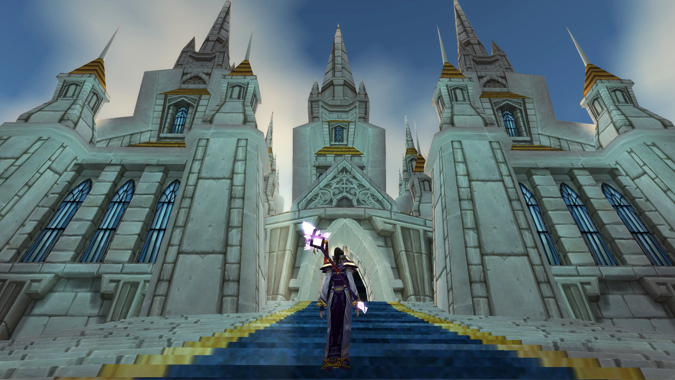 Recently, Legion descended upon us and the Priest community has been abuzz with speculation. We didn’t get too much Priest-specific information out of the expansion reveal, but we learned that each class will build an order and base its headquarters, or Class Halls, in locations that are thematically appropriate, as well as acquire powerful weapons unique to each spec. This presents an interesting challenge for the Priest class, in order to unify the many racial organizations that grew independently of each other with separate beliefs. Let’s take a look at the possible options as well as the pitfalls.

The question on everyone’s lips has been: “Where will Priests go?” Nobody has a definitive answer, because Priests are as diverse as the races they hail from. Many of the other classes don’t have this issue. Paladins have a clear calling, rooted deeply in the Silver Hand and the Argent Dawn, regardless of their separate races. Mages have been working together in Dalaran for thousands of years, when the High Elves deigned to teach early Humans their arts. Rogues have solidarity in their stealth, and Warlocks, shunned for turning from the arcane to the demonic, band together in their taboo magic in the nether.

For gameplay reasons, Priests all have access to the same spells. In lore, however, their origins and powers differ greatly. The starkest difference lies between the Light and Shadow. Natalie Seline may have been the first to suppose the existence of Shadow, but the Forsaken were the ones who embraced it. In lore, we would have no Discipline or Holy Forsaken Priests, unable to handle the Holy Light that abandoned them without writhing in agony from the burns it would cause. Likewise, none of the other races would openly touch Shadow, still considered a mere cult. Humans and Dwarves follow the benevolent Light, a mysterious force of the cosmos, whereas the Night Elves acquire their power from Elune herself. The Draenei may revere the Holy Light, but their reverence takes form in the physical manifestation of the Naaru. Trolls follow their voodoo Loa spirits, drawing from that ancient power to become spiritual advisors amongst their tribes. 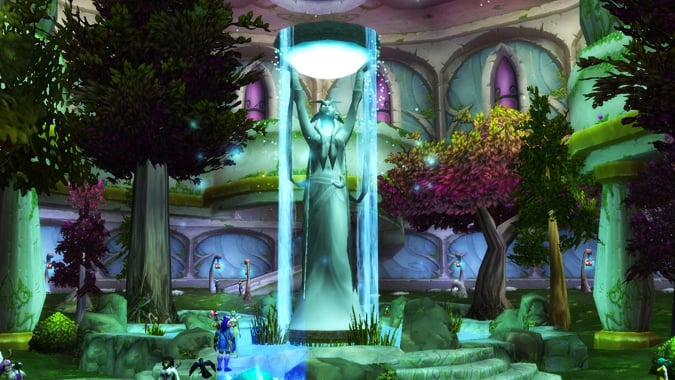 These different viewpoints make it hard for Priests to gather in a single cohesive area. There is no sole “Priest Order,” but many separate orders whose viewpoints don’t always necessarily align. Even the power that they pull their spells from isn’t the same. A Class Hall would have to be quite homogenized in order to accommodate each Priest background, but in doing so it makes it a little less special. I can understand how the separate Paladin specs would all feel comfortable together at Light’s Hope; their power all originates with the Holy Light. As a Human Priest, I have very little in common with one of Elune’s Night Elf Priestesses, and even less with one of the Forsaken. My power lies in the Holy Light as opposed to the Shadow. Draenei are perhaps the most neutral, but even their faith in the Light is separate in the form of the divine Naaru.

Priests of different races generally don’t congregate in the same places to worship, nor do they revere the same holy areas. The most iconic setting for Priests would be Stormwind Cathedral, but that is decidedly Human in both architecture and nature. The Light as a cosmic force is ever present here, where the Humans and Dwarves would feel most at home. The problem with this setting is whether the Horde races would be welcome or even at ease. Regardless of any factional squabbles that the Order itself would settle, I can’t imagine that Forsaken Priests would want anything to do with the place. At best, it’d constantly remind them of the life and body they lost. At worst, it’d burn them to stay there. 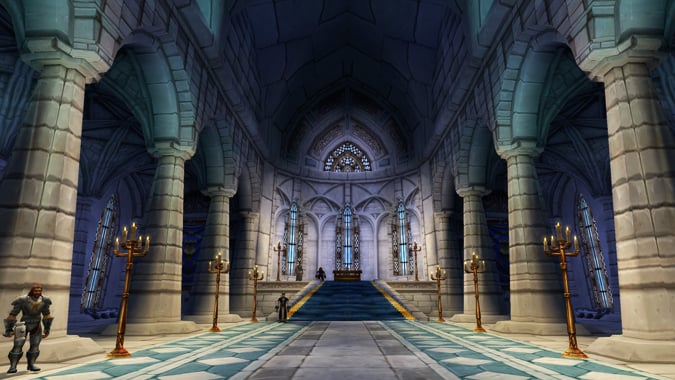 Along with the Human theme, we have Northshire Abbey and the towns in former Lordaeron. Northshire Abbey is also undoubtedly Human in nature, although it has its basis as a Priest Order under the Clerics of Northshire. However, this also veers too much toward Human and not enough toward Priests of different races coming together. Going north, Hearthglen is a nice compromise between Human and Forsaken, residing in the former lands of Lordaeron where the Forsaken live. It’s currently under the purview of the Argent Crusade, who might be willing to relinquish it to Priests if they have already passed Light’s Hope to Paladins. Stratholme, like Hearthglen, also straddles the line between Human and Forsaken, although strengthened with a clear history involving the Light. It’s where the original Knights of the Silver Hand started, where Priests donned armor and trained in martial combat to become Paladins. 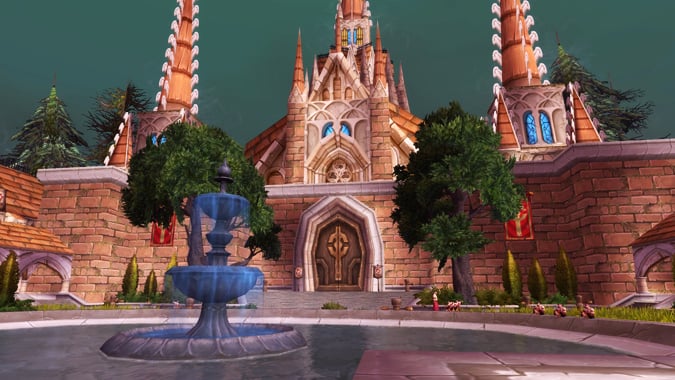 Further north into Forsaken-controlled lands, we have Scarlet Monastery. There’s more history with Priests in particular, as it was once the holy gathering of Lordaeron’s priesthood. It was only in the Third War that the Scarlet Crusade rose to take it over, and it’d serve well as a holding that is neither overly Alliance nor Horde.

In more neutral areas, we have Shattrath and the Temple of the Red Crane. The Temple would be a likely spot if we were only basing it off of neutrality. Pandaren are the very epitome of neutrality, residing in both the Horde and the Alliance depending on which way they choose. However, the flaw in this is that perhaps the Temple is too neutral and generic. As our legendary capes in Pandaria revealed, the Red Crane stands for all healers, and we’re looking for something that is more indicative of Priests. 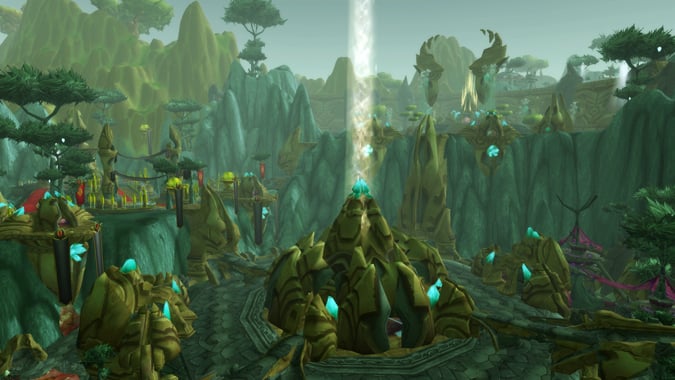 Shattrath seems a very likely option. It’s the home of the Naaru, beings of pure Light. The Naaru’s dual nature reflects in-game Priests as well, drawing from the Light in life and from the Shadow in void. It’s already served as a refuge for different peoples, especially hosting the Aldor and the Scryers despite their animosity toward each other. With Shattrath, I could imagine different sections devoted to each race’s beliefs, much like the Aldor and Scryers have separate dwellings above the city. Though I have gleefully informed certain Priests that they can go in the dusty corner or basement, Shattrath would even be able to accommodate less savory Priests. Hopefully off in a corner.

While I like the idea of my Priest rising up and wielding a weapon of great renown, the issue with Artifacts is that we don’t have clear lore designating any particular weapons. I fear that Blizzard’s just going to make up some weapons for us. The most iconic weapon we have is from a vanilla questline: Benediction and Anathema, but Blizzard has already made it clear that they have other ideas in mind for Priests that are “much cooler.” Priests in lore generally aren’t known for the weapons they carry, but rather their faith or powers. And even then, if Blizzard procures great weapons that we’ll be proud of, are we digging up these sacred weapons, or are we taking them from prominent figures in the current world? That’s all fine and dandy, but it makes me feel like we are being pushed up and above great lore leaders.

I don’t mind being a commander of the army in Draenor, the Light knows I’ve been fighting the good fight a long time and doubtless I have made my way into prominence. However, I don’t see myself as important enough to be taking command of weapons currently held by the likes of Velen or such. Finding a powerful weapon tucked away in the dusty archives makes far more sense, one that belonged to a figure in history like the Frost Mage staff that belonged to the first Guardian of Tirisfal.

One weapon that’s stood out in lore, both in power and in name, is Fearbreaker, which seems to be a valid option given its noble history. An heirloom of the Bronzebeards, passed down through the ages, Magni Bronzebeard bequeathed it to Anduin Wrynn when Anduin visited Ironforge. A mace infused with the Light was a good gift for a budding young Priest. Anduin bestowed the mace to Baine Bloodhoof in a show of friendship, and it was later returned when Baine warned the Alliance of the coming attack on Theramore. Anduin had the mace during the Siege of Orgrimmar and Garrosh’s trial, and I suppose it still resides with him. This feels more like a Holy weapon for me, given its healing powers. 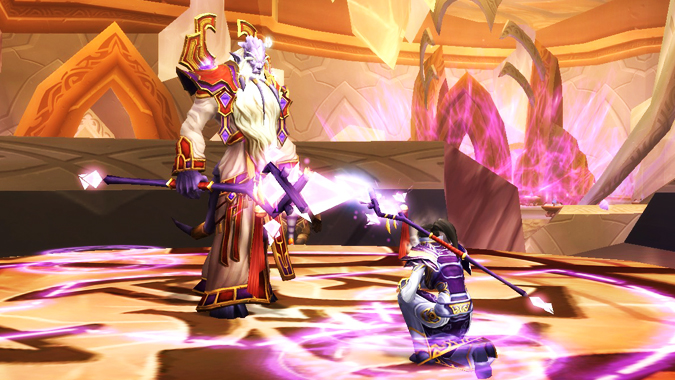 Discipline, with its unique nature of preventing and dealing damage, would most likely take a more offensive weapon such as a dagger or staff. Staves have long been the weapon of choice for DPS specs, and this could easily extend to Discipline, who takes on a harsher mercy than gentle Holy. A few staves have made an appearance in WoW, connected with powerful Priests. We have Velen’s staff, already in game in the form of an epic drop and a quest reward. The staff isn’t named, there’s nothing particularly powerful or well-known about it, other than the fact that it is carried by such a venerable Priest as Velen. However, there may be lore behind it that hasn’t yet made its way out of Blizzard’s vault. In Prophet’s Lesson, Velen had a vision of Anduin leading the armies of the Light, and we’ve already seen that Anduin will have an important role to play in Legion. A possible scenario could be that Velen bestows his staff upon Anduin, who then grants it to us in the class-specific quest for us to lead our Order. 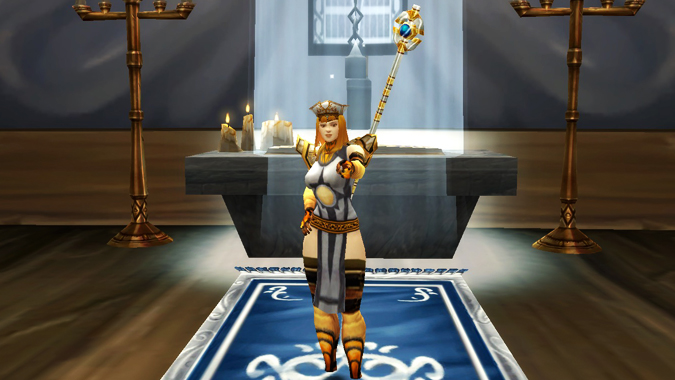 Two other Priest NPCs have wielded staves in game: Archbishop Benedictus and Confessor Paletress. Benedictus is dead, slain by our own hand in the Hour of Twilight, but no mention is made of what became his staff. Perhaps we retrieve it, bent on continuing the Light’s work from before he turned away. Confessor Paletress’ staff is interesting — it’s very similar to the staff depicted in our class icon. Paletress also resonates strongly with Discipline, providing solace and sermons at the Argent Tournament grounds. Finally, there’s an unnamed but powerful staff mentioned in Night of the Dragon. It was given to the Draenei Priest Iridi. Though she was a Shadow Priest, her staff was gifted from the Naaru, which would tie it to the Light. Her staff was twin to a staff wielded by her murdered companion, and either of these could have their story expanded and end up being used.

This is all just speculation, and Blizzard could end up pulling weapons out of thin air. Whatever they choose, I hope both the Class Hall and the weapon reflect our lore with the attention and detail it deserves. I’ve been passionate about the Priest class since the day I made my character, and I’m looking forward to having specific lore and story for us.