Heroes Towers of Doom map goes live on the PTR 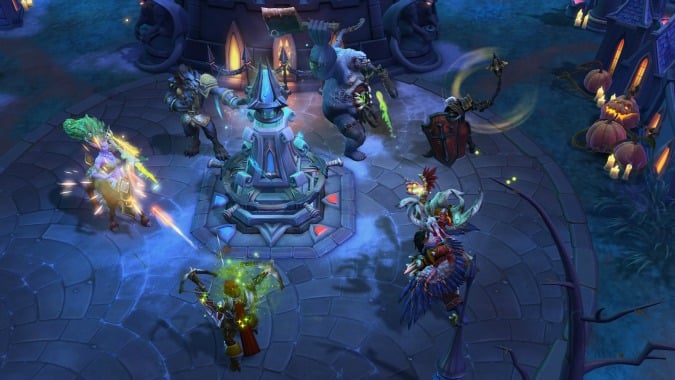 The Heroes of the Storm PTR just went live today and along with it some of the content and changes we heard about at the State of the Game panel at BlizzCon. The main focus of this patch is to play test the new Towers of Doom battleground announced this weekend. It has different gameplay mechanics than other maps as your team does not attack the enemy core directly, but activates shrines that do the dirty work. This will be the only map available on the PTR.

In addition to the new battleground are some hero and gameplay changes. The recently tested scaling changes to power gain through leveling are going to be tried out again. This will give your hero a little more power early in the game and smooth out past level 10 to current levels. The in-game score screen will now show kills and assists. You only get kill credit for striking the final blow, so get ready to deal with kill stealers in your group.

A handful of heroes are getting tweaks including the nerf to Uther that was talked about in this weekend’s panel. On the upside, your team will no longer be matched with a team that has Supports if yours lacks them as well.

No new heroes are available yet in this patch. Cho’Gall is going live this Tuesday on the regular servers for those that attended BlizzCon or bought a Virtual Ticket. Towers of Doom will not be going live next Tuesday and will stay on the PTR at least through the following Tuesday, Nov 24.

Blizzard Watch is made possible by people like you.
Please consider supporting our Patreon!
Filed Under: Heroes-ptr, Towers Of Doom
Advertisement