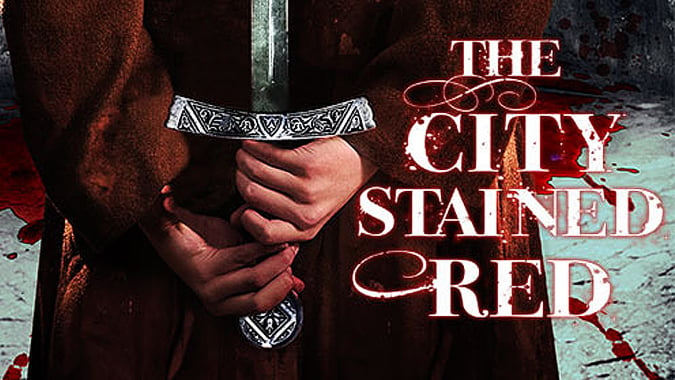 I read Sam Sykes’ latest novel, The City Stained Red, in part because his earnest writing advice involved eating a raccoon, and that was just too sensible to pass up.

But let’s backtrack for just a moment, because first, I followed Sykes on Twitter due to his excellent writing advice, and then, when I realized he had several fantasy novels under his belt already, I asked which one I should read. The latest one was the one he suggested, so I picked it up while on the way back from BlizzCon, and settled down a few days later to devour it in an evening.

The premise of the book is delivered right up front for devouring eyes: What exactly happens if an adventurer decides they simply don’t want to adventure anymore? More importantly, what happens if the swordsman wants to put down his sword and retire, but the rest of the world — right down to his sword — seems to be keenly invested in the exact opposite? It’s my kind of story — I like stories where ordinary characters are shoved into extraordinary events, especially if those ordinary characters are mostly unwilling to participate. A story where a character is actively, desperately trying to extricate him or herself from all of the nonsense of a fantastical magical world and simply go live an ordinary life? Even better.

Layered on top of the struggles of Lenk, his adventuring party and his fervent desire to simply let all the killing and adventuring end is the story of the city itself, which is as much of an entity as anyone else in the book. Cier’Djaal is at once a city dripping with wealth fostered by the export of silk produced by giant spiders, and a war zone waiting to happen — simultaneously the best and worst option for a would-be-retiring adventurer. And there’s an incredibly dark tale woven into Cier’Djaal, one that slowly reaches out and drags everyone in the adventuring party in, willing or no. 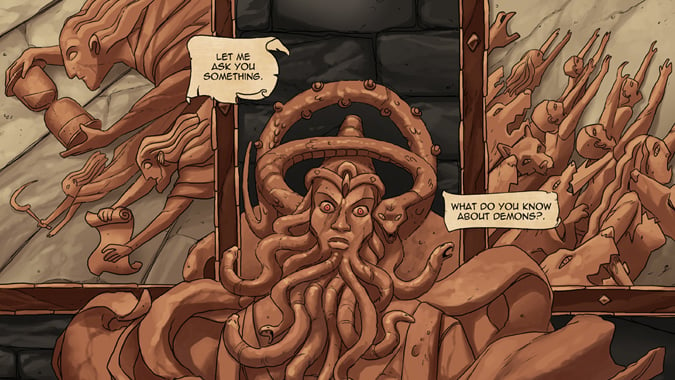 It turns out The City Stained Red is the first book in a second trilogy from Sykes, and as a result, the cast of characters has already been introduced and fleshed out in the previous trilogy — something I wasn’t aware of, and had I known, I might have started with the earlier books. This left me stumbling just a little when fantasy races started being thrown into the tale rapid-fire, simply because I didn’t have a proper mental picture of any of them.

That didn’t really matter so much in the end, because City is very much a character piece. You don’t really need the standard introductions here, because each character makes themselves known within the span of a few well-timed barbs of back and forth with their … I can’t call them friends, but fellow adventurers is probably a more apt term than “companions,” which still implies there’s some kind of level of affection between these people.

And there isn’t — not overtly.

But City’s story is wrapped up in these individual characters far more so than anything else. They’re an adventuring band, sure, but they’re individuals first, each with their own goals in mind. They’ll work together, they’ll fight at each others’ sides, but the interesting part of the story lies in why each character is doing what they are doing, and more importantly, what each character will do in that nebulous “after” of a happily ever after that is anything but happy.

It’s a finely executed fast-paced novel of character studies and conflict, sword slinging and dark entities and everything an adventurer would probably love if he weren’t busy with trying to go about the business of not being one. My only regret with the book is that as the first part of an obvious second trilogy, there were far too many loose ends left when I was finished – and I have to wait until March for the second book to come out. You can pick up The City Stained Red over on Amazon, and the second novel, The Mortal Tally, is already available for pre-order as well. And if you’re looking for more of an introduction to the novel, Sykes posted an eight page introductory comic on his website, as well.

Blizzard Watch is made possible by people like you.
Please consider supporting our Patreon!
Filed Under: Bring Down Heaven Series, Sam Sykes, The City Stained Red, The Mortal Tally
Advertisement