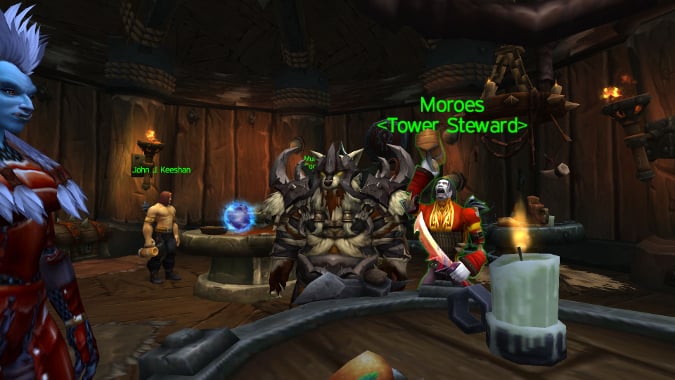 In the upcoming Legion expansion, one of the new features is the Artifact, a weapon steeped in lore that gains power not only as you level, but also as you spend time questing and completing goals even after you reach the max level. Artifacts replace all weapon drops for the Legion expansion, with each specialization receiving their own Artifact. Not just every class: every spec will receive a unique Artifact weapon, including Elemental and Restoration Shaman.

From a game mechanic standpoint, it seems pretty interesting. There is no longer a need to carry multiple weapons with you and you no longer have to worry about running a dungeon over and over again on the hopes of receiving that one drop — or competing with the rest of your group to get it. It is an interesting concept that I’m eager to see how it plays out, but what interests me almost more is the lore behind these weapons. In particular, how they fit in with the class fantasy of Shaman. 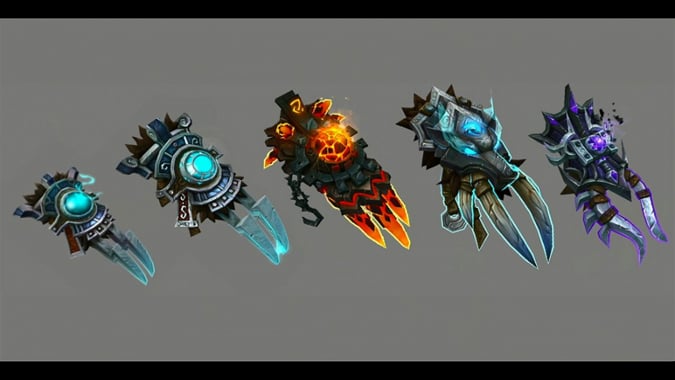 For Elemental Shaman, it doesn’t get much better than wielding a weapon of pure elemental lightning. The Fist of Ra’den, well, let’s take a look.

Aman’Thul the Highfather, leader of the titan Pantheon, entrusted his greatest servant, Highkeeper Ra, with this artifact, which could channel the fury of the storms. Ra used it to bestow life on the titan-forged mogu race, and he wielded it in battle against the Black Empire for years beyond counting. Later lost to Ra, the weapon was ultimately recovered by the August Celestial Xuen, who saw its immense and dangerous power, and chose to safeguard it until someone worthy could take up the weapon in a righteous cause once again.

So, here we have the item that was used to channel the fury of the storms to create the entire Mogu race. We are literally going to wield an item powerful enough to create and entire race of living beings. Not only that, it is something that was created by the leader of the Pantheon, Aman’Thul, and wielded by Ra who used it not only to create life in the form of the Mogu, but also as a weapon against the Black Empire. An artifact so powerful that the August Celestial Xuen hid it away for fear of the damage someone would cause with it.

That right there, that is pretty cool if you ask me. It’s a titan-infused weapon that literally birthed an entire race of beings into Azeroth. It harnesses the power or wind and storm, and thematically it fits pretty perfectly with what I would envision to be an Elemental Shaman weapon. Ties to lightning, ties to the titans, strong ties to lore of a not so distant expansion. Everything seems to slot into place nicely.

Visually, the weapon also appears as if it will have the feeling of being elemental. The most basic form is a simple fist weapon with all the small visual references one would expect from Mogu’shan Vaults, as well as crackling with lightning. Upgraded versions appear with molten lava, the traditional Shaman wolf head motif, and even ones that look as though they have been touched by the void itself.

Overall, I’m fairly happy with this weapon. I think it captures the fantasy of the class quite well and it makes me curious as to how we obtain it. If Xuen has spirited it away for the sake of safety, is it only the coming of the Legion that prompts him to release it to us, or do we have to prove our worth? Time will tell, and I can’t wait to dive right in and find out more about our weapon and how we unlock it. I’m also really looking forward to seeing what powers we can unlock through the weapon and how it will augment our abilities to harness the wrath of the elements. 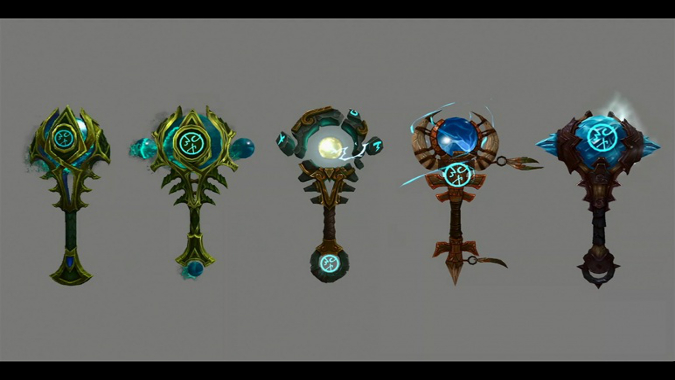 The Scepter of Azshara

While I love the Elemental Shaman weapon, and feel that it fits the specialization perfectly, Restoration’s artifact feels a bit odd to me. Well, let’s just take a gander.

A powerful scepter created by Queen Azshara long ago, before her transformation into a naga. The scepter swirls with waters from the Well of Eternity prior to its corruption, granting the scepter great magical and restorative powers. The Scepter of Azshara was lost during the War of the Ancients, shortly before Azshara and many of her followers were swallowed by the sea. Taken up by surviving night elves who knew nothing of the power it truly held, it was buried with an unknown priestess in a family tomb in Azsuna, waiting to be discovered by someone that could unlock its true potential

Don’t get me wrong, that is a very cool piece of lore, though I question the connection to Restoration Shaman beyond simply the fact that it has water. From what we know lore wise, Queen Azshara was a powerful Night Elf Highborne Mage. We also know that the Well of Eternity was a powerful arcane font that purified the energies from the void and converted it into pure arcane energy. Mage and arcane energy do not a Shaman weapon make. That is, at least, in my opinion.

Now, lore-wise, Night Elves did evolved from Trolls that settled by the Well of Eternity, and Trolls are in fact a shamanistic race. There is the possibility that maybe ancient Night Elf society has vestiges of that shamanistic past, but as it stands I find myself really curious about the connection between Restoration Shaman and this artifact. Let us also not forget that this Artifact shares a name with an item already in the game,that drops from the Well of Eternity dungeon: The Scepter of Azshara.

Visually, I think the weapon is stunning. The base model seems to be something right out of Night Elf history, with fine curves and intricate patterns woven around the watery core. One of the visual updates, and probably my favorite of those previewed so far, is very Tauren in nature. Hand carved runes and wood encompass the watery center and it looks almost we are wielding a totem as a weapon. That is not a concept I have a problem with at all. Now, it was noted by the Warcraft Devs twitter account that they acknowledge that the item name has previously been used, but what they do with that information will be something we will have to watch in the coming weeks. I’m hopeful that they will either tie this in with some crazy good lore or they will rename the item so that it makes more sense as a Shaman weapon.

Of course, we still have yet to see how these weapons will affect our abilities and spells, and that’s something I’m eagerly awaiting. What will we get to power up and what choices await us for both slinging lightning and bringing in the heals?

What do you think about our artifact weapons so far?