The Queue: Statues are neat 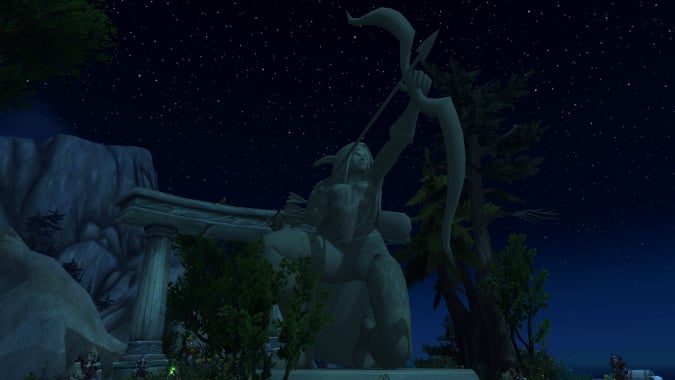 Question for the queue since leveling has been brought up. What would your opinion of a efficient way to clean up leveling without dedicating too much blizzard resources?

I don’t think there’s any single fix to the leveling process. Fixing it wouldn’t be a resource-light problem. It didn’t get weird overnight — it got weird over the course of a decade. Every new expansion draws attention away from older content. Heirlooms let you speed up the leveling process if you chose to do so, but they’re also incredibly powerful items in terms of stats, opening a huge power gulf between those who use heirlooms and those who don’t. We’ve gone through multiple talent system changes, we’ve had the item squish, we’ve had ability pruning, Cataclysm changed the flow of quest hubs, and I believe they’ve even altered how much experience is required to level through certain expansions.

These things didn’t all happen at once. They happened one at a time. In the vast majority of those cases, the changes were made with the latest expansion (or max level) in mind, because players spend the most time there. And that’s still true. Even if you level a brand new character from 1 to 100 without heirlooms, it really doesn’t take that long anymore. Heirlooms are a turbo boost on an already speedy process. So I can’t fault Blizzard for a focus on max level — we’re just reaching a point where so many years of accumulated changes are eventually going to reach a breaking point if everything below level 70 or so isn’t completely excised from the game.

I suspect the Blizzard developers will start projectile vomiting in panic if I suggest another Cataclysm, but I do think something on that scale would be required to bring the leveling process back into a fully functional position. This isn’t something where you can make XP a little slower or a little faster. You’d need to determine how long a player should be in a zone given current rate of accruing XP to ensure they get a zone’s full story arc before being shuffled off to the next place — which might, in some cases, mean zone revamps exactly on the scale of Cataclysm.

You’d need to reorganize when low level characters learn spells so they aren’t choosing from talents which modify spells they don’t have yet — and might not have for another 20-30 levels. Professions would need to be fixed to become a viable activity again rather than something you don’t touch until you reach the “catch up” mechanic at max level. You shouldn’t need to “catch up” if you leveled the character from level 1! You should have been able to do it all along! They would need to do something to make gear drops and quest rewards compelling again, because post-squish, the stats on gear stays more or less the same from level 20 onward. When you finally get an upgrade, it might be 20-30 levels later, and you’ll get 1 extra Intellect or whatever.

Fixing leveling would be an enormous undertaking. Would it be worth it? Maybe. Maybe not.

Why do they call it the Curse of Flesh when it seems more like the Gift of Flesh sometimes? It’s like the Curse allows us to succeed where the Titans fail.

We’re badasses. Imagine if we were as badass as we are now but also made of metal.

Random artifact question I’ve been curious about … Inventory-wise, how are the dual weapon (or main hand/offhand or sword/shield) artifact combos handled? If you unequip them do they take up 2 bag slots like those items do now or do they appear as a single item in the bag? I assume they take up 2 slots but hoping someone with alpha access can confirm.

The dual weapon artifacts have interesting functionality. When they’re in your bag (or when you loot them for the first time) it’s one item with a double tooltip. For Outlaw Rogues, for example, your main hand weapon is Fate and your off-hand weapon is Fortune. When you have them equipped, Fate and Fortune are separate items in the appropriate weapon slots with their own tooltips. When you unequip one of them, you unequip both of them, and Fate and Fortune become one item. The tooltip for Fate and Fortune as a single item displays the information for both weapons in one box. You see Fate’s details, then beneath it, you see Fortune. Equip that single item and it splits into two again.

I have an alpha question there’s an actual answer to! QftQ: Have anyone on your team tested the new profession content on the alpha, and if so, what was your initial impressions? From my understanding, at the very least skinning has been implemented with some of its storyline. I’m curious as to this pretty underreported part of the alpha.

I have to admit, I don’t think any of us have messed with professions on the alpha yet. Doing it would require either leveling it up the old school way — which is hellish on its own, let alone on the alpha servers where your progress will go away when the realms go down — or starting up a garrison on alpha realms and coasting off of the Warlords of Draenor catch-up mechanics. We could do it — and we probably will eventually — but the thought of it makes me want to cry. The only profession I’ve played around with so far is Fishing and have found it rather dull even as far as Fishing goes.

It would be nice if alphas/betas let you jumpstart professions so you could dig right into the new stuff. Starting premade characters out with max level battle pets would be nice, too.

What are the chances of Livefyre providing us a way to link to stuff without it auto embedding into the comments?

Unlikely. We’ve disabled certain things in the past, but Livefyre inevitably changes things so either we can no longer disable them, or the option to do so gets hidden away somewhere to discourage its use. Sticking an extra space in the URL or something like that so people need to copy/paste it is a decent enough workaround.

How does questing look for healers in Legion? The developers’ stated goal every expansion is to make questing and doing dailies as healing specs just fine, but it feels like they always miss the mark. Thinking about picking up my DPS artifacts first, instead of my healing (raiding) ones, and want to know how horrible I’d be to do that

I hope you don’t mind I removed some excess butts from your name, butts. Currently, it’s hard to say due to there not being many healers available for play in the alpha yet. I’m hearing healy monks are so far the preferred spec for leveling in the alpha, but that isn’t a testament to the strength of healing monks. Rather, monks are so undertuned people are going heals for the added survivablity even if it’s painfully slow — and it is painfully slow. Discipline Priests are currently amazing at soloing — because they’re hybrid DPS specs. They can deal decent damage and keep themselves perpetually at full health while questing.

Every other healing spec? We don’t know yet. Can’t play ’em.

Any plans/timetable on some more D3 stuff?  And are the few D3 streams you wonderful people have going to be put up on youtube?

By stuff, do you mean streams? What kind of stuff? Yes, we plan to do more streaming, but it’s sort of an extra for-funsies thing right now, and we all need spare time in our schedule to get together. The last stream we did will make it to YouTube, but I’m breaking it up into smaller pieces. Because honestly, nobody wants to watch multiple 2+ hour videos from us in one week. I sure don’t.

Any updates on the coloring book?  I was stuck in the hospital all last week and a color book would have been great company.  At least when they weren’t torturing me with needle sticks and IVs.

It’s going to be an annual, and we launched February 3, so … expect it to roll around sometime after February 3, and hopefully, every February to follow.