The Queue: How can I hold a staff? My hands are full 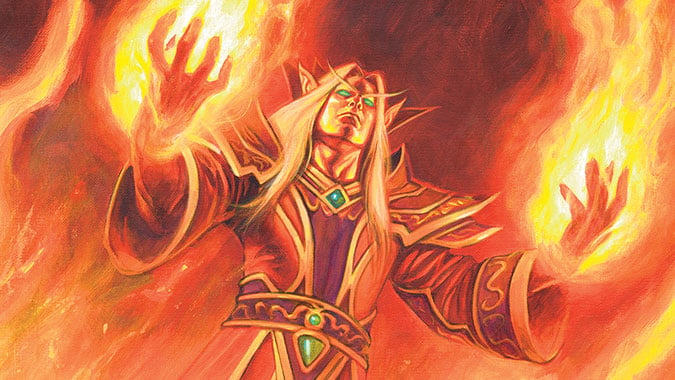 After Cata launched we all got the old world updates even if we didnt have the expansion.  What stopped people from going to Twilight Highlands and Uldum?  Hyjal was surrounded by mountains (dont think you could fly without the xpac).  Vash and Deepholm were not connected.  But Uldum and TH had a beach.  You could swim around the outside of the continent. Anyone ever try this?

Nothing stopped you from going there, but you couldn’t actually do anything in those zones except maybe pick a fight with some mobs and probably die. You couldn’t start any quests, unlock the portals to those zones, or anything like that. If you just wanted to be a tourist and look around, you could do it.

Is the Route 66 map a Team Fortress 2 nod? Between the desert setting and pushing a large bomb, it sure feels that way.

Pushing a bomb is just a game mode. It’s an escort/payload. You push Object X from Point A to Point B and the other team needs to prevent it.

As for Route 66 being in the desert, Route 66 is a real world highway. Route 66 started in Chicago and extends all the way down to Santa Monica, California. Between Chicago and Santa Monica, Route 66 cuts through Missouri, Kansas, Oklahoma, Texas, New Mexico, and Arizona. Technically, Route 66 was discontinued as a designation in 1985, but the highway is well-known enough in pop culture that the name lingers. “Historic Route 66” is, I believe, the unofficial designation for what was once Route 66, which is used by people taking road trips through the US. When Anne and I took our road trips to BlizzCon a few years back, part of our journey was on Route 66.

If you’re going to pick a historic location in the American Southwest for a game map, you’re most likely going to end up with a location along Route 66. You might as well use the whole darn thing.

has casters gotten updated animation for weapons? Are they now holding them for casting instead of just being sheathed?

Many spell effects have been changed in Legion so combat looks quite different now, but the actual casting animations don’t seem to have changed. I’ve heard this a lot — people saying characters hold their weapons while spellcasting now — but I’m not sure where that came from. Maybe one specific spec does it and I haven’t played that one in particular, but of all the classes/specs I have played, this isn’t true. Casters don’t hold their weapons. In fact, I just logged onto my Discipline Priest to make sure, and I can’t even take the Discipline staff off of my character’s back. I press Z to “unsheathe” the weapon, and my character moves as if to grab it off of her back, but it doesn’t move anywhere. That, I suspect, is a bug, but the point remains: I haven’t seen any casters using their weapons in their spell animations.

Do you think the Legion overworld game takes a bite out of LFG/LFR interest as the accessible PVE path of least resistance?

This is another one of those Legion questions we simply can’t answer yet. The level cap in Legion is 108 right now. Azsuna, the fourth leveling zone, isn’t open yet. Suramar, the max level zone, also isn’t open yet. There are no endgame activities available for play whatsoever.

We simply don’t know what PVE looks like at endgame. As it stands right now, endgame doesn’t exist.

Do you think that future heroes for Overwatch (like Doomfist) will be sold individually, or in expansion packs?

If my memory serves me correctly, the devs have already said new maps and characters will be free. In a game where switching characters on the fly is supposed to be an integral part of gameplay, making certain characters off-limits might not be fair. It isn’t like Heroes of the Storm where you pick one specific character for a match and everyone is locked into that character. In Overwatch, if you playing as Tracer isn’t working out so well for your team, you can immediately switch over to Reinhardt or whatever. You’d be a drag on your team if you didn’t have access to certain heroes at all.

I expect Blizzard will continue to use cosmetics like skins to monetize new additions to the roster.