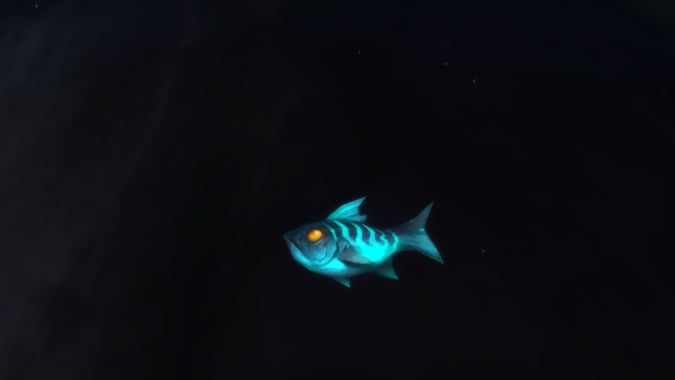 Look at this fish. Isn’t this fish amazing? Whoever designed this fish deserves an award for Excellence In Legion Fish Design™. I kind of want this fish as a pet, but I think it might lose its wondrous appeal if I had the option of looking at it any time I wanted.

Q4tQ:  How do you feel about world PvP on a PvE realm?  I mean should it be possible for someone to trick you into flagging yourself by being flagged themselves in an area they know AOE is going out (is that still possible?)?  Or more importantly, should NPC’s be killable on a PvE realm? What’s the purpose there?

They fixed that whole AOE flagging trick back in Mists of Pandaria, so you don’t really have to worry about that anymore. As for NPCs…well, that’s a good way to get attention if you’re looking for world PVP on a PVE server, so I don’t think they need to be immune from all damage. I do wish some of them had a faster respawn timer, though — it makes it a little difficult to level when…you know, all those people you have to turn your quests into are taking an inconvenient dirt nap.

QFTQ: How do you feel Legion will end? Do you think we’ll win? Lose? Be sent out into the Nether by the Legion? What happens to our Artifacts? Carry them into next expansion? Or lose/sacrifice them in the final battle?

I think it’s way, way, way too early to ask about that yet. We don’t even have all of the leveling zones unlocked yet, so we don’t know what happens once we’ve got everything together and ready to attack the Legion. Heck, the Legion hasn’t really even been a gigantic factor in a lot of the leveling areas — minions, sure, allies, sure, but the Legion itself? Not so much. I’m hoping this means we’ll actually see a lot of story progression once we hit level 110 and go about the business of endgame content. At that point, we’ll probably have a clearer picture of where things are headed. But right now, it’s too early to think about.

When do you think the earliest the pre-expansion event(s) will take place?  Will it be as lame as the holiday quests we get in our garrisons?

Given what we’ve seen from previous pre-expansion events, it could be anywhere from a couple weeks to a month or better when we see it hit. I don’t really have a good estimate for you, but from what I’ve seen so far, the pre-expansion event is going to be a worldwide thing, and way more involved than anything we’ve gotten in our garrisons. It all takes place back on Azeroth, and the affected areas for the event are scattered all over the world. I’m looking forward to seeing how it plays out.

Regarding the current Tavern Brawl in HS (only minions that cost 7 or more allowed), what happens if you don’t have enough high-cost minions and spells to build an entire deck? Not that I’d have this problem myself, but that does seem pretty unfair to newer players.

I asked both Matticus and Alex about this, since they’re both pretty frequent Tavern Brawl players, and they both said the same thing: If you don’t have enough cards to play in a Brawl, you can’t play the Brawl. Alex also added, “But I think some classes can do it ​fairly​ easily with mostly the basic deck. Druids have a lot of high cost stuff IIRC.“

Noob Q4tQ – Archeology.  Can you ‘run out of dig sites’?  Also, how can I find the ones I am looking for? (currently looking for troll for instance)

You will never, ever run out of dig sites. They spawn as you complete them, so you’ll always have more to do. You can usually tell what type of fragments and dig sites you’ll be finding just by looking at the area around you — if you’re in Troll ruins, you’re going to find Troll dig sites. Most of the Troll dig sites are located on the Eastern Kingdoms rather than Kalimdor (Kalimdor is dominated by Night Elf sites primarily) — but there are a few exceptions. Dig sites in Tanaris may be Troll sites, and up in Northrend, dig sites in some parts of Grizzly Hills and Zul’Drak are also typically Troll sites.

How are nights in the new zones on Alpha? Are they better than what Cataclysm did to the day/night cycle?

They’re pretty dark as far as the skybox goes, but it’s still easy enough to see where you’re going. I haven’t checked out Azsuna yet (but I’ll be up to that over the weekend!) to see how it looks when it’s late at night. Both Highmountain and Stormheim feel like they’re dark, but you can still see everything — to me, it feels very much like being up in the mountains when there’s a full moon out. You can make out everything very clearly, but it’s also clear that you’re not out and about in the middle of the day. Highmountain also has a really pretty moon.

Dalaran doesn’t look too different right now regardless of day or night — but that’s to be expected, as a major capital city, you kind of want to be able to see where everything is.