WoW Archivist: C’Thun and the Gates of Ahn’Qiraj

Tomorrow, every Hearthstone player who buys a pack of Whispers of the Old Gods will receive a free legendary: C’Thun. C’Thun is one of Azeroth’s four Old Gods, terrifying ancient beings from the Void who seek to twist and dominate all life on Azeroth. The four Old Gods have all been part of WoW‘s story so far, either directly or indirectly, but none of them had a more memorable impact on the game than C’Thun. C’Thun was at the heart of WoW‘s very first realm-wide event, called the Gates of Ahn’Qiraj.

The hunting and gathering storm

Patch 1.9 brought this event to WoW on January 3, 2006. Two raid zones were added in this patch: the 20-player Ruins of Ahn’Qiraj and the 40-player Temple of Ahn’Qiraj, with C’Thun as the end boss of the latter. In order to access them, every realm had to pool their resources to unlock the Scarab Wall — and thus the raids behind it.

Unlocking the Gates took both a determined realm population and a highly dedicated raid team. The raid team undertook a quest line for the Scepter of the Shifting Sands. It was indisputably the most hardcore quest line ever in WoW, and it was far too complex to do it justice here. (Look for that in a future Archivist column!)

While the raid team was out grinding rep and conquering bosses, everyone else had to go out and gather a few supplies for the war effort. By “a few” I mean … exactly 3,237,000 items. Some of the items could be turned in by either faction while others were specific to the Horde or Alliance. The items came from every type of gathering in the game.

As you can imagine, this was not trivial. It took weeks of effort from the entire population of your realm. Economies came to a screeching halt as Auction Houses were stripped bare. Many players gathered like mad purely to unlock the content. Others used it as an opportunity to price gouge. But for the most part the event brought out an unprecedented spirit of cooperation. Because the factions needed different items, the neutral Goblin-run Auction Houses became the place to make trades by listing required items for cheap. With millions of bandages to hand in, First Aid was never more relevant (and would never be relevant again). 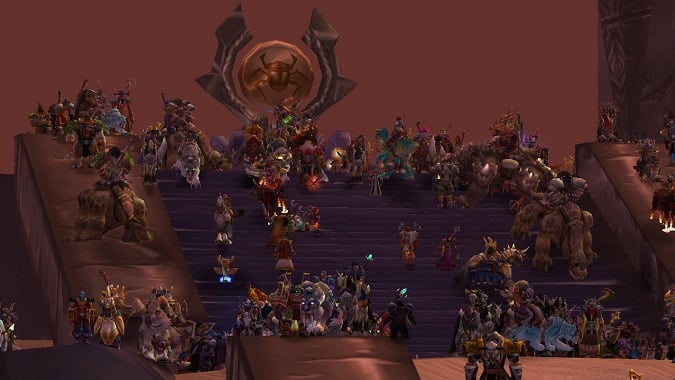 Blizzard created a website that tracked the progress of each realm. It became a competition to see which realm could unlock the Gates first and thereby reap eternal fame. Turning in all the items began a 5-day countdown to “move the supplies into position” in Silithus. At the end of the countdown, a bearer of the Scepter could use it to ring the gong. That player earned the Black Qiraji mount and the Scarab Lord title, at a time when you could only earn titles through the Honor System. Anyone else who rang the gong in the next 10 hours also received the rewards.

Kalahad on Medivh-US was the first to ring the gong, on January 22, 2006. No one on Medivh was quite prepared for what was about to happen…

Most guilds who earned the Scepter announced to their realm the exact time they would open the Gates. Others tried to keep it secret, but of course word spread quickly when a guild was spied congregating in southern Silithus. Either way, the zone was often jam-packed with players at the moment of opening. Now imagine hundreds of NPC enemies, many of them hundreds of feet high, pouring out of the freshly opened entrance and the entire zone of players fighting back.

It was a lagfest far worse than the old Tarren Mill/Southshore battles. Players fought the Qiraji via slideshow. Realms crashed. Servers couldn’t remember where you died and plunked you down in the default graveyards of Stonetalon and Westfall. Boats between continents disappeared and stranded entire armies of players in the middle of the ocean to slowly die of fatigue. Those who disconnected could find themselves at the tail end of hour-long queues. 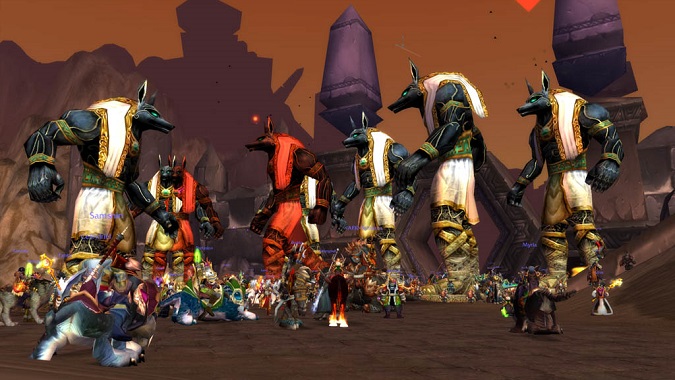 Regardless, players persisted. And they soon discovered that the invaders had spread beyond Silithus throughout Kalimdor. Resonating crystals heralded the arrival of the Qiraji in other zones. Each enemy had the toughness of a mini raid boss and required a large team of players to bring down. For the next 10 hours, players struggled for control all over the continent and scooped up glorious high-level loot like the ultrarare world drop Teebu’s Blazing Longsword.

The Gates of Ahn’Qiraj event was the largest battle that WoW has ever seen, and we will never see its like again. Mostly because it melted hardware faster than gummy bears in a microwave. While the experience was not often a hassle-free or even a friendly one, players who lived it often point to that day as the most fun they ever had playing WoW.

After the dust settled, players could finally enter the Temple and face the mastermind behind the invasion — C’thun — in all his eye-laser-y glory.

Blizzard has attempted to recapture some of the magic of the Gates event with the Isle of Quel’danas and Isle of Thunder events. In both cases, it took a realm-wide effort to unlock content. But what made the Gates so special, and yet so frustrating for those who missed it, was that the players controlled every aspect of it. It simply wasn’t good design that the event could be triggered in the middle of the night on a random date. If you couldn’t log in during the following 10 hours, you’d miss the entire experience. People could have literally slept through the whole thing.

For me, I’ll never forget what I was doing that day instead of fighting the Qiraji — I was at a funeral, and I missed the whole event on my realm. Obviously I made the right life choice, but I shouldn’t have had to miss out completely, as so many others did. Of course, if the event had run for weeks on end, WoW would have been unplayable for most of that time.

Today’s event design, like much else in WoW, is far more forgiving and accessible. We’ll all get to fight the Legion on the Broken Shore, for example. But those of us who remember standing in Orgrimmar, crafting thousands of Linen Bandages, will never forget that those little pieces of cloth were utterly instrumental in saving Azeroth from the Old God C’Thun. Have fun summoning him tomorrow!

Blizzard Watch is made possible by people like you.
Please consider supporting our Patreon!
Filed Under: Classic Wow, Cthun, Events, Gates Of Ahn Qiraj, Hearthstone, Scepter Of The Shifting Sands, War Archivist
Advertisement