The Queue: I still love Tanaan 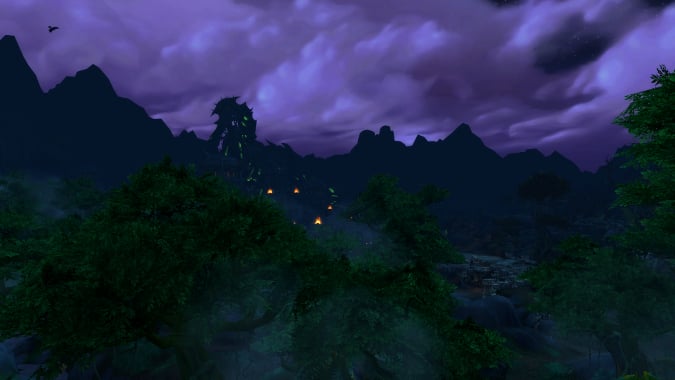 Despite the overwhelming amount of hate zones like the Timeless Isle and Tanaan Jungle receive, I still love both of them. While I like Legion‘s world quests, I’ll be sad if we never get a Tanaan-like again. I love going out and … killing. Killing everything. Forever.

Is Anne back tomorrow? Please tell me yes, I miss her so.

Nay. You’re still stuck with me.

Do you think that the War with the Legion will ultimately come to be called The Fourth War?

The Upper-Case Wars seem to be the world wars with Orcs as major players … or, you know, simply the canon way to refer to the RTS games. If there’s a Warcraft 4 RTS, that’ll likely be the Fourth War. The war with the Legion seems to be referred to as the Third Invasion or something like that.

Honestly, I’m pretty sure the Wars are just shorthand for the games and we’re not likely to see that terminology used again. There’s no compelling reason for it. And frankly, there are so many wars in Warcraft, have we ever actually ended one? When does one end and another begin?

Some people love collecting mounts or achievements. When the Wardrobe comes out, will you go the completionist route and try to collect every possible transmog appearance like @Shadesogrey did with Engineering recipes?

Nah. As it is, I’m not much of a completionist — I’m picky about which things I need to completely fill out and there isn’t much logic behind it. For example, I love getting reputations to Exalted. I find filling up a bar and seeing constant progress really enjoyable. However, I find collecting pets and mounts pointless. Having more mounts doesn’t do anything for me, so why would I collect them? Of course, getting Exalted with every possible faction doesn’t do anything for me, either. Why do I enjoy one and not the other? Who knows.

I see the wardrobe much like I see pets/mounts. I’ll collect the stuff I think is cool. If there’s a set I like, I’ll go get it. But I don’t know why you’re try to collect every single piece of armor in the game. Especially the butt-ugly ones. Why? Whyyyy?

How do you feel about gating content behind rep? Needing Friendly with all the Broken Isle factions to see the World Quests is fairly recent news; easily done with your main, a burn on your Alt. It seems fair on the surface, what do you think? Is this good game design?

I don’t see an issue with the Friendly requirement for World Quests. It isn’t difficult to hit Friendly — you simply need to do the level-up questing content. I don’t think you even need to finish all of the zones, just… enough of each one. With Legion’s zone-scaling, you could theoretically grind mobs in one zone from level 100 to level 110 and save all of your quest rewards for level 110. The minimal reputation requirements on World Questing means you can’t do that anymore.

I think it’s fine. However, I’ll probably feel less-fine about it a year from now when I’m playing my fifth alt and, thanks to rested XP, I’ve hit level 110 within two zones, but I can’t participate in level 110 content until I’ve done those other zones, and…

Yeah, it’s an alt issue. For launch, I really don’t expect people are going to experience a hurdle. You’ll it Friendly simply by playing.

I know you hate June Bugs, but if you could eliminate one bug from the world, would you choose them or some other bug?

Fastest way to get 2000 garrison resources on a fresh level 100?

Treasures. Especially now with flying ezmode. Zip around the continent, getting treasures and killing rares. They’ll only give you 10-15 resources each, but that piles up. All of the purple clickables in Tanaan give resources — chests, apexis nodes, and so on. There’s really no better way to get a quick rush of resources. The purple clickables in Tanaan — the ones which give Apexis fragments for the daily — respawn. They respawn specifically because they can be used for the daily, but you don’t need the quest to loot them.